SCTE/ISBE CABLE-TEC EXPO  As we surmised last week, the kickoff of today's all-virtual event featured a demo of a bandwidth-eating light field video stream to help show off the capabilities of the cable industry's "10G" network initiative.

Light field displays generate holographic, 3D images that allow users to view content from multiple angles and even detect shadows. Cable's 10G initiative is actually more than "cable" or hybrid fiber/coax (HFC) for that matter, as it is focused on the delivery of symmetrical multi-gigabit connections over multiple access network types, including HFC, fiber-to-the-premises and wireless, along with enhanced security and low-latency capabilities. 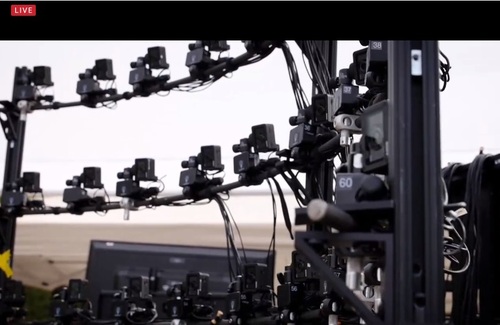 An array of cameras capture images for raw footage that would be assembled into the resulting 3D lightfield stream.
(Source: SCTE/ISBE)

Today's demo comprised a handful of elements and steps.

In conjunction with a San Francisco-based company called Visby, a light field scene for today's demo was captured in Los Angeles using 100 cameras sampling at 250 Gbit/s and producing about 8,000 minutes of raw footage that was all combined to create the holographic images. Charter hosted the content in a compute cluster at the cable edge, running a 50 Gbit/s compressed stream over a multi-Gig network.

Meanwhile, a cloud app was used to manage a low-latency connection to deliver the holographic data downstream and to take gesture input from the user that was sent upstream. Charter, meanwhile, operated a "10G-capable" network using network and in-home equipment from CommScope (including a Wi-Fi 6E connection) for a symmetrical 2Gbit/s connection to the demo home. For the fifth and final piece, Looking Glass Factory supplied a holographic display that delivers about 33 million pixels to provide a 3D video experience (and a 50-degree viewing cone) without the need for a headset. 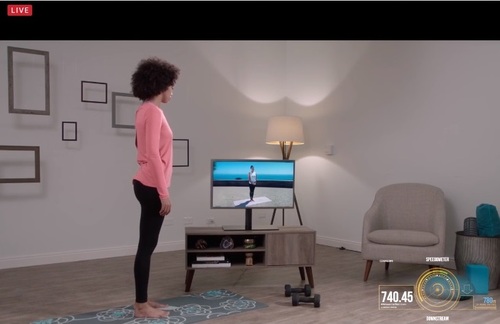 A display from a company called Looking Glass Factory outputs the 3D rendition of the light field – an interactive yoga class that can receive gesture commands from the user/viewer.
(Source: SCTE/ISBE)

"This is the first time a hologram has been streamed over a 10G network," Andrew Ip, SVP of emerging technology and innovation at Charter Communications said. "This is the definition of true immersive," he said of light field technology.

Mediacom Communications (in tandem with CableLabs and NCTA) conducted a similar demo for a "10G Smart Home" recently set up in Ames, Iowa. However, that demo  which would have required about 500 Mbit/s to 600 Mbit/s of throughout  was done locally and not streamed on the network connected to the demo home.