After bringing X1 to residential customers, college campuses and a few hotels, Comcast has introduced a version of its cloud-powered video platform that's tailored for millions of small and midsized businesses, including various bars, restaurants and gyms, within the cable operator's footprint.

This commercial-oriented offering of X1, being sold and distributed by the Comcast Business unit, includes some hallmark features of the platform such as the interactive guide, voice remote and the sports app, which presents real-time stats and quick tuning access to live games, as well as connected apps that present stock market and weather info on the TV screen. (See Comcast Finds More Work for X1.) 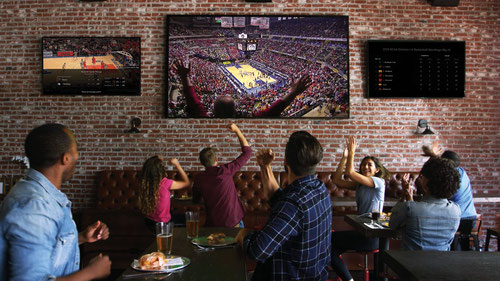 Comcast Business hopes its tailored version of X1, which features an integrated sports app, will be a hit at bars and restaurants.

As this is not a consumer offering, this version of X1 doesn't include integrated access to OTT apps such as Netflix and Amazon Prime Video or access to a cloud DVR. However, each TV in the business location will require an X1 set-top or client device.

Comcast Business views this as an upgrade opportunity for existing SMB customers that already take a simple linear TV service from the company, and as a way to carve deeper into a commercial services sector that is also a big focus of satellite-delivered services from Dish Network and DirecTV.

"This is a refresh of the video product that we've had in market," said Christian Nascimento, vice president of product and premises services at Comcast Business. "We're trying to get [X1] out to as many customers and as many screens as possible. Business just makes a ton of sense for this, because there's an enormous amount of television screens in businesses across the country."

But following Comcast's broader strategy of being a "connectivity" company, SMBs that want the new version of X1 must also be taking broadband service from Comcast Business.

Nascimento hinted that Comcast could build new X1 features tailored for the SMB sector that could include apps or additional voice-based functions. "The X1 platform positions us really well to develop new features and functionalities in the future that will help businesses operate," he said.

The new focus on SMBs provides another outlet for X1 and will likely give Comcast enhanced returns on the investments it has made in the platform, which is now rolled out to more than 60% of its residential video subscriber base. Comcast also has X1 syndication/licensing agreements with Cox Communications and three Canadian operators -- Rogers Communications, Shaw Communications and Videotron. (See Rogers Sparks 'Ignite TV' Using Comcast's X1.)

And adding a new video component could present some additional growth opportunities for the Comcast Business unit, which generated revenues of $1.8 billion in Q4 2018, up 9.5%.