Harmonic says its new "Reef" remote PHY Shelf (RPS) is able to combine a cable operator's full suite of services, including IP-based data and legacy video and out-of-band signals, onto a platform that can be deployed in a central headend, in network hubs or in remote PHY locations in some of the newer distributed cable access architectures.

Harmonic's Reef remote PHY shelf is a two rack-unit enclosure that can pack in 18 of the vendor's remote PHY devices.

Asaf Matatyaou, VP of solutions and product management for Harmonic's cable access business, said that the Reef, which converges all of a cable operator's services onto one platform, can simplify and accelerate cable operators' ability to add upstream capacity without requiring them to grapple with splitters and combiners normally associated with typical node splits and traditional cable modem termination systems (CMTSs).

Harmonic is also targeting another issue that cable operators face with traditional gear  limited space and power. The Reef is a high-density, two rack-unit enclosure that can pack in up to 18 of the vendor's "Pebble" remote PHY devices (RPDs), which shrink down key electronics of a regular CMTS. The Reef is also designed to be flexible in the sense that a cable operator can configure the amount of downstream and upstream that's dedicated to the shelf, Matatyaou said.

Harmonic's new Reef RPS "is relevant right now" because of the pressure some cable operators are feeling in the upstream during the COVID-19 pandemic, he adds.

Peak data rates on residential cable networks have jumped in recent months, particularly in the upstream direction, as millions of people have been forced to work and school from home and make fuller use of upstream-taxing apps such as videoconferencing. Although peak traffic levels have been leveling off in recent weeks, there's been a 34.9% increase in upstream data traffic on US cable networks since March 1, according to the NCTA's COVID-19 Dashboard, which tracks network usage data from Altice USA, Cable One, Charter Communications, Comcast, Cox, GCI, Mediacom Communications, Midco and Sjoberg's Inc. 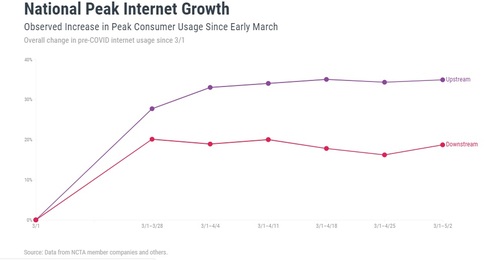 "This addresses a need that is urgent right now especially with the upstream traffic demands that we've seen in today's Internet behavior," Matatyaou said.

Harmonic, which competes in the cable access market with companies such as CommScope, Cisco Systems and Casa, hasn't announced any commercial deployments for the Reef RPS. But Matatyaou says the vendor has completed trials with a number of "leading operators."

Update: Harmonic clarified that the Reef can be used with other CMTS cores that comply with remote PHY standards and not solely on networks that run CableOS.

Meanwhile, dozens of cable operators have already begun to deploy or trial new virtualized networks that use the CableOS software. A biggie is Comcast, which has a multi-year, multi-million-dollar enterprise licensing deal with Harmonic for CableOS.

Other announced adopters of CableOS include Comporium, 1Tennessee, Buckeye Broadband, DSA (Denmark), Com Hem (Sweden) and Westman Communications Group (Canada). Harmonic also has an agreement with the National Cable Telecommunications Cooperative (NCTC), a group that puts together volume deals on programming and tech products for hundreds of independent cable operators.

Harmonic announced last month it ended Q1 2020 with 27 commercially deployed customers of CableOS, up 17% from the prior quarter. Those deployments covered about 1.3 million served cable modems, up 20% from Q4 2019. While Harmonic's CableOS numbers have been climbing, the company also acknowledged last month that the overall pace has slowed recently as cable operators altered operational priorities to handle the near-term needs of the pandemic.