MoCA prepares to 'Link' up with 5G fixed wireless, satellite and PON broadband

The Multimedia over Coax Alliance (MoCA) is working on a new standard that aims to bridge the gap between outdoor broadband access network devices and the broadband gateway inside a customer's home. Specifically, the group's new standard, called MoCA Link, will provide a low-latency, 2.5Gbit/s-capable bridge that connects 5G fixed wireless access, satellite or PON broadband devices on the side of the home or on the roof to the in-home Wi-Fi router. 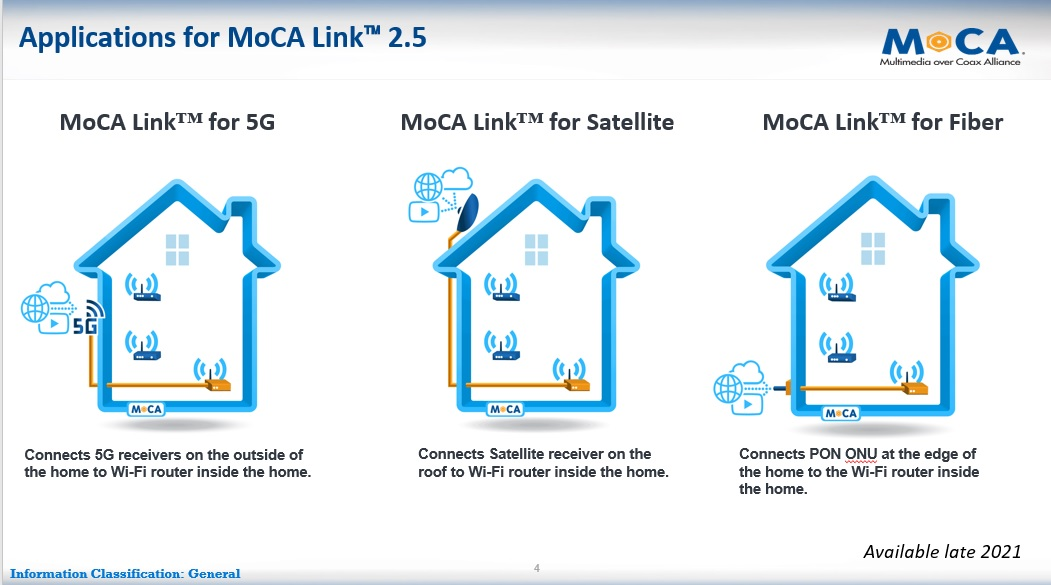 The Multimedia over Coax Alliance has identified a set of deployment scenarios for the emerging MoCA Link standard.
Click here for a larger version of this image.
(Image source: MoCA)

Crammond said he expects silicon-makers to take on the heavy lifting for MoCA Link development, and then work on product integrations with original equipment manufacturers (OEMs) that make 5G fixed wireless and satellite broadband receivers, as well as PON optical network units (ONUs).

Crammond confirmed that MaxLinear, which has MoCA 2.5 silicon in its product set, is among the suppliers working on MoCA Link technology. Crammond joined MaxLinear when the company acquired Intel's Home Gateway Platform division in August 2020.

Crammond said the MoCA Link technology evolved from discussions with service providers that were looking for ways to solve connectivity issues for two-box solutions for broadband and, in general, to reduce the cost of their service installations. In many instances, the edge access device needs to connect to a home gateway that is installed in the basement or another out-of-the-way location that could impair the performance of the broadband service, he explained.

MoCA Link and its point-to-point approach is intended to close the gap between 5G, satellite and PON boxes on the side of the home with the gateway inside the home using high-bandwidth and low-latency technology. Like other MoCA-based technologies that, for example, are used in pay-TV receivers and set-tops to help support multi-room DVR applications, MoCA Link will also rely on existing in-home coax wires.

The general specs for MoCA Link will support 2.5 Gbit/s of capacity, latencies of less than 1 millisecond, and utilize reverse power feed capabilities. The latter element will open up the opportunity for the home coax network to provide power to the 5G receiver, satellite broadband dish or even the PON ONU.

Crammond noted that MoCA has received some particular interest about this new approach from companies in the satellite broadband game, including those that are focused on delivering broadband service via constellations of low-Earth orbit (LEO) satellites.

He said MoCA Link technology could be adapted to retail products, but noted that the service provider market is the primary focus of the new standard.