If you thought automation was only for the Western software sophisticates of the telecom world, think again.

Kazakhtelecom remains one of central Asia's state-controlled telcos, and unflinchingly dominant in its fixed-line market. It has clearly benefited from government largesse at the expense of its rivals. And it operates in a country to which few outsiders would naturally look for examples of success in digital transformation.

Yet automation and digital transformation are firmly on the management agenda of the former telecom monopoly. It already attributes major efficiency improvements to its existing transformation program, including a sharp rise in revenues per employee, a metric that will increasingly attract scrutiny in the automation era, Light Reading has previously argued. In 2014, Kazakhtelecom made just 7 million Kazakh tenge ($20,860) per employee. That figure had risen to KZT8.4 million ($25,032) in 2016, and it will hit KZT9.2 million ($27,416) this year, the company predicts, as efforts to streamline and digitize the business continue. (See Efficiency Drive by Major Telcos Has Claimed 74K Jobs Since 2015.)

On automation, though, it is just getting started. According to documentation that Light Reading has obtained from the company, Kazakhtelecom is now considering investments in technologies that fall into the category of robotic process automation (RPA), a subset of automation in which operators including the UK's Colt Technology Services Group Ltd and Germany's Deutsche Telekom AG (NYSE: DT) have made investments. "It's software that can automate tasks like a macro does in Excel," said James Crawshaw, a senior analyst with the Heavy Reading market research group, in explaining RPA during a recent Light Reading event. (See Colt: Automation's 'Silent Killer' Is Poor Quality Data and DT Trumpets Automation Savings Worth '800 Employees'.)

Kazakhtelecom has identified six processes in the client services, accounting, human resources (HR) and legal departments for potential RPA, its documentation shows. In client services, for example, sales employees are currently bogged down in processing applications for service connections, disconnections and changes. Automating that process would eliminate a lot of routine manual work. In accounting, meanwhile, automation could free up employees who spend much of their time inputting data from invoices and financial statements into SAP AG (NYSE/Frankfurt: SAP) systems. RPA could deliver similar efficiency benefits in the HR and legal departments, the operator believes.

The initiative is bound to fuel concern about headcount reductions at a business that has already slimmed down considerably. Staff numbers have fallen from about 29,000 five years ago to roughly 23,000 today. The RPA that Kazakhtelecom is considering would affect about 500 employees. And while this does not mean 500 jobs will disappear, Kuanyshbek Yesekeyev, the operator's chairman and CEO, expects Kazakhtelecom to become a lot smaller as a result of automation in all its forms. "This is a story about how to be more efficient using computers," he tells Light Reading during a meeting in central London, while declining to share his estimates about the precise impact automation will have on the size of the workforce. 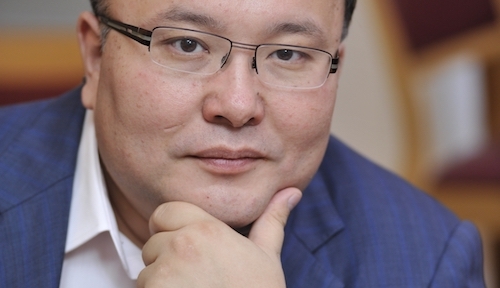 Kuanyshbek Yesekeyev, chairman and CEO of Kazakhtelecom, has automation firmly on his agenda.

Digital transformation is at least partly responsible for the 6,000 job cuts that have happened in the last five years. Among other things, Kazakhtelecom has been centralizing functions and standardizing processes. That includes consolidating the 16 network operations centers (NOCs) it has maintained for the various regions of Kazakhstan into one facility in Almaty, the country's biggest city. Yet to run its course, this centralization and standardization is seen as a prerequisite for investment in RPA next year or in 2019.

As it becomes increasingly "paperless," Kazakhtelecom is also developing new key performance indicators to measure its progress on digital transformation. One target that has obvious ramifications for employee numbers is to increase the share of sales it does through online channels, from about 20% today. "We want to move sales channels from offline to online," says Yesekeyev. "That is one part of the digital transformation."

Next page: Shaping up