Automation is a major buzzword in the telecoms world, and is closely associated with the shift toward the cloud-oriented world of 5G architectures, but much of what is tagged with the automation badge doesn't quite make the cut.

So says AT&T's VP of network cloud, Amy Wheelus, who used her keynote at the recent ONS Europe 2019 event in Antwerp, Belgium, to point out the clear distinction between automation and mechanization and to stress why the distinction is important.

She reminded attendees that AT&T has been working towards a more software-oriented network in recent years and now boasts that 75% of the traffic running over its MPLS connections is now software-defined.

Now AT&T is in its next phase of transformation that involves adopting DevOps processes: The operator is about a year into that journey, which involved bringing multiple teams together and changing how people work, how to collaborate and to be accountable to the same set of goals.

The ultimate aim, said Wheelus, is declarative predictability: For operations to be as predictable as the sun rising in the east each morning.

For AT&T, the first step towards this is Airship, the open source provisioning tool that is part of AT&T's Network Cloud development that will host its 5G packet core. Wheelus said Airship "delivers a single source of truth" in the data repository that enables automation and predictable outcomes.

But that goes beyond much of what is called "automation" today, she says: Today, "much of what we call automation is mechanization, taking a task that is repeatable and getting a machine rather than a human to do it. That has value, for sure: Human intervention -- 'hands on the keyboard'  generates failures. But mechanization only get you so far: It's repeatable but not scalable," says Wheelus. Automation, on the other hand, "takes the outcome of one task and uses it to drive the next task, across the whole system," she noted. It advances the operational process.

Mechanization can help but it's not enough to deliver the scale and the process advances needed as networks become more software-oriented, which is where operators such as AT&T are headed as they prepare for 5G. 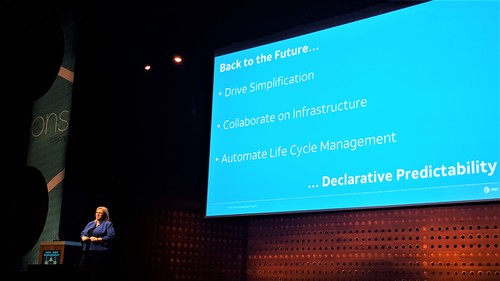 'What do we want? Declarative predictability. When do we want it? Now!' AT&T's Wheelus lays out her key goals at ONS Europe.

That evolution also requires much greater control over the telco cloud infrastructure that operators need to roll out but which, until now, has been something of a wild west. That's why AT&T is one of the major names behind the Common NFVi Telco Taskforce (CNTT), which, under the auspices of the GSMA and LF Networking, is developing a set of NFVi reference models and architectures that operators can use to develop their virtualization stacks: The CNTT's first common reference model and architecture, based on Openstack, was unveiled in Antwerp.

"We need to create a common NFVi  we need to create a finite number of infrastructure models. We have to be able to control what we do and automate it," noted the AT&T executive, who stressed the importance of building automation in "from the start, from design  getting things out quickly and then trying to automate later doesn't work." It's a process worth breaking deadlines for, she added: "Now we are shifting dates out to get the automation process right."

Trying to persuade all operators to build their next-generation networks around the same small number of models seems like wishful thinking, but there's a growing number of major carriers, including China Mobile, Orange, Verizon and Vodafone, driving the CNTT developments and seemingly making progress, even if there are doubts about the potential outcome.

Wheelus is adamant that operators should join forces and "drive for simplification at the infrastructure layer  that's not where we want to compete," she said. The deployment of common NFVi models can help the telco community achieve the true automation and declarative predictability they need, she believes. "We're not there yet but it needs to be our North Star," she concluded.