No country has managed telecom consolidation quite like India.

For years, it ranked as the world's most competitive market, with more than ten operators fighting for business in some regions.

Today, just three private-sector companies are left. And an imminent court decision could turn it into an effective duopoly. 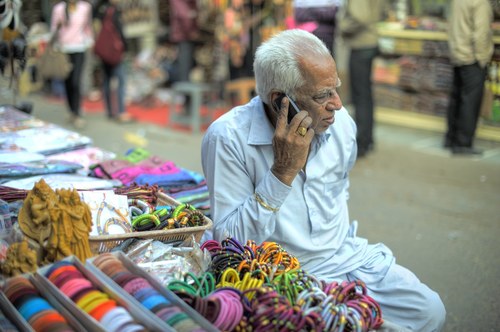 Mobile usage has taken off in India while its operators have continued to collapse.

Lawmakers are to decide on the repayment schedule for money owed under India's adjusted gross revenue (AGR) rules, which demand licensing fees based on a percentage of sales.

The AGR has in the last year been a source of friction between Indian authorities and telcos. The government thinks it should extend to non-telecom-service revenues. When a court took its side, the telcos, in obvious disagreement, were hit with an exorbitant bill.

Of India's three surviving operators in the private sector, Vodafone Idea has been the worst affected.

Its total bill comes to 582.5 billion Indian rupees ($7.8 billion), about INR133 billion ($1.8 billion) more than it made in total revenues last year. So far, it has paid only INR79 billion ($1.1 billion) of this amount, and its financial situation is precarious.

Unless India's lawmakers give Vodafone Idea at least 15 years to settle the bill, it could join India's graveyard of telcos, leaving only Bharti Airtel and Reliance Jio behind.

Jio-inflicted pain
Even such a long repayment schedule may not be enough to save a company created from the earlier merger of Vodafone India, a subsidiary of UK-based Vodafone Group, and Idea Cellular, part of India's Aditya Birla Group.

Ever since that merger was finalized, just two years ago, Vodafone Idea has struggled.

Its last set of coronavirus-afflicted results, published on August 6, revealed a 5% year-on-year dip in first-quarter sales, to about INR107 billion ($1.4 billion), and a quintupling of its net loss, to a grim INR255 billion ($3.4 billion), compared with the year-earlier period.

This time last year, Vodafone Idea recorded about 320 million for the June-ending quarter. More than 40 million have subsequently disappeared, either changing to a rival or simply ditching the service.

Rather like the service providers that have already vanished, Vodafone Idea has been hurt badly by the arrival of Jio, which began offering mobile services in 2016.

Owned by Indian billionaire Mukesh Ambani, Jio has relied on government largesse and its own wealth to invest in a state-of-the-art network, launch a price war and usurp the mobile market.

Today it is India's biggest operator, with 387.5 million customers at the end of March, including 17.5 million who joined this year.

Prompted by Jio's entry, the merger that brought Vodafone Idea into existence has been a problematic distraction for its bosses.

Reports of network outages and connectivity issues have dogged the business while it has struggled to integrate two huge and separate network systems.

Modernization has been difficult because so many customers still rely on ageing legacy technologies. Of Vodafone Idea's 320 million customers, fewer than 105 million subscribe to 4G.

This has opened up a huge gulf with Jio, which runs all voice and data services on an advanced and partly automated 4G network. That technology lead allows it to charge less than rivals for the same services on a higher-quality network, Jio executives have insisted.

Busily integrating and maintaining older networks, Vodafone Idea has struggled to catch up.

The concern is whether cuts hampered competitiveness. Costs are likely to have fallen largely as a result of store closures, the very thing Vodafone Idea blamed for its customer losses. And parts of the business, clearly, are still not lean enough: the operator is now targeting another INR40 billion ($530 million) in annualized cost savings in the next 18 months.

Under pressure to reduce this figure, it still needs to pay for network and IT improvements to have any chance of challenging Jio, which is already talking enthusiastically about 5G.

In its last fiscal year, Vodafone Idea spent about INR101 billion ($1.4 billion) on capital expenditure. So far this year, it has invested just INR6 billion ($80 million), blaming coronavirus disruption for the slump.

To cover these costs, annual AGR payments and spectrum fees, it must deliver a sharp increase in earnings, boosted by lower costs as well as higher average revenue per user (ARPU).

Right now, and despite Jio's cost competitiveness, it lags rivals on this ARPU measure, reporting a monthly figure of INR114 for the first quarter. That was only a slight improvement on the INR108 it managed a year earlier.

The problem is Vodafone Idea's large base of mainly rural, 2G customers. Growing the 4G business would help to lift ARPU. In a worrying sign, however, Vodafone Idea lost about 1 million 4G customers between April and June.

An injection of capital would come from the sale of an 11.15% stake in Indus Towers, a joint infrastructure venture with Bharti Infratel, a part of the Bharti Enterprises group that also owns Airtel.

Infratel was due to acquire Vodafone Idea's stake earlier this year, but the transaction has been delayed by the pandemic and concern about Vodafone Idea's fiscal position.

While some merger-related problems are of Vodafone Idea's own making, the government's Jio favoritism and apparent antipathy toward foreign investors explain many of its woes.

Regulatory decisions have repeatedly buoyed Jio at the expense of other telcos, and especially Vodafone. After treating Vodafone India for years mainly as a source of tax revenues, authorities are now seemingly attempting to crush it under the hammer of the AGR.

Without government help and a fairer system, the operator's disappearance is a real possibility. That would leave Airtel as the only private-sector player between Jio and a monopoly, dirtying India's already tarnished image as a place to do business.

Five years ago, India was in desperate need of consolidation and the service improvements that Jio has brought. Saving one of the few operators that still remain should now be the priority.