"Shocking" was the word apparently used by Hiroshi Mikitani, the president and CEO of Japanese ecommerce giant Rakuten, to describe the pricing for his company's highly anticipated 4G mobile service, which launches on April 8. That came via an interpreter during the company's streamed press conference, and  even if something was lost in translation  the word aptly conveys the impact for Japan's entire mobile industry, Rakuten included.

The headline news is that Rakuten Mobile's soon-to-launch network service will cost just 2,980 Japanese yen ($27.60) per month, roughly half what mobile users typically pay to NTT DoCoMo, KDDI or SoftBank, the incumbent operators. For that fee, under the Rakuten Un-Limit plan, customers will be able to gorge on as much data as they can manage and make unlimited calls through a communications app called Rakuten Link. The app is based on the previously maligned RCS (Rich Communication Services) technology, which could now be on the verge of a comeback.

To lure customers, Rakuten is scrapping the charges for its first 3 million subscribers during their first year of service. This and the actual rates seem bound to result in a Black Friday-like stampede for the Rakuten service. When Reliance Industries made a similarly aggressive move into India's mobile market, it quickly snatched business from its rivals. France's Iliad boasted millions of customers months after entering Italy with its low-cost service. Japan's existing mobile operators will be trembling.

For the avoidance of confusion... 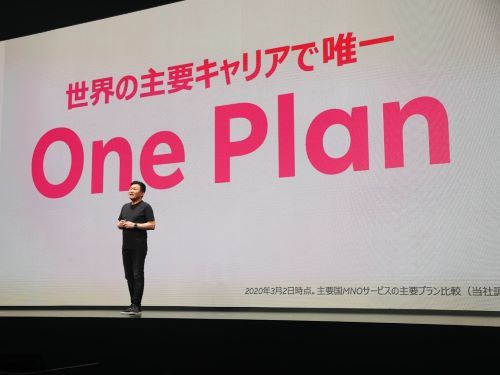 Rakuten's Hiroshi Mikitani is a big fan of simplification.

But there are some caveats. For a start, the unlimited data offer applies only in areas covered by Rakuten's infrastructure. In parts of the country where it relies on KDDI  a network it has long used as a mobile virtual network operator (MVNO)  usage is capped at just two gigabytes per month. As things stand, Rakuten's own network is confined mainly to the cities of Tokyo, Nagoya and Osaka. Executives have promised Japan's regulator they will have 8,600 basestations deployed by March 2021, but only 3,490 are in service today.

Rakuten says it can afford its largesse because it is building a highly efficient network that takes advantage of the latest cloud and software-based technologies. Tareq Amin, Rakuten Mobile's chief technology officer, says the main difference between Rakuten and a traditional carrier is on the radio access side, the costliest part of the entire network. Operators typically use specialized equipment that ties them to the ecosystem of a big vendor. Rakuten opted for general-purpose gear and open software, building the world's first open radio access network (RAN), said Amin today.

"We felt we owe consumers in Japan to pass these cost reductions on that we get from an open RAN platform," he told reporters. "It is 40% cheaper than traditional telecom infrastructure, and I think opex will be even better in how you run and manage this network."

These bold claims explain why Amin is such an attraction at industry events, but they will have to be substantiated by Rakuten's financials when the commercial service is finally available. Right now, deployment activities are weighing heavily on the bottom line. Last year, Rakuten Mobile's net loss widened to more than JPY60 billion ($560 million), from about JPY13.7 billion in 2018, even though sales were up one third, to roughly JPY119.8 billion ($130 million). If all of Rakuten's 2.3 million MVNO customers took advantage of the free network offer, today's main revenue stream would dry up instantly.

Kenji Hirose, Rakuten's chief financial officer, says the company's ability to make a profit depends on the speed of adoption and the sale of additional services to those customers. But he does not expect to break even soon. "We consider that in three years' time we should be able to make a return on investment and produce a profit, but I will refrain from talking about further details," he said in answer to questions earlier today. In the meantime, other business challenges have depressed the Rakuten share price, which has fallen 30% since June last year.

Speed of network deployment seems nearly as important as speed of customer adoption. As Rakuten extends its network reach, it can become less reliant on KDDI, cutting the wholesale charges it pays, and provide unlimited services to additional customers. Yet even with low-cost equipment, site buildout is expensive. Moreover, despite Amin's enthusiasm, the technologies Rakuten is using are largely unproven in a highly developed commercial market. If anything goes wrong in a "live" commercial environment, the costs and reputational damage could be significant.

Rakuten and its executives certainly deserve applause for what they are attempting. It takes some guts to be technologically disruptive in one of the world's most capital-intensive industries and one of its most technologically advanced countries. Today's announcement shows Mikitani and Amin were not kidding when they promised huge savings for customers. The real challenge is to prove that it works.