Vodafone UK gets serious about automation with Ciena deal

Andrea Dona realized Vodafone UK had a looming network problem just four days after he joined the operator from Ericsson in March 2019. Data traffic was growing exponentially as customers indulged their smartphone addiction. If costs rose in tandem, Vodafone would face an astronomical bill.

"How do you decouple the growth of your network and data explosion from the cost of capital and running that network?" says Dona, now Vodafone UK's chief networks officer.

The answer has partly involved a rearchitecting of the transport network that is still underway. Inherited in 2012 with Vodafone's £1 billion (US$1.4 billion, at today's exchange rate) takeover of C&W Worldwide, this network is the tangle of optical fiber lines that stretches across the UK, connecting Vodafone's sites to its core network and providing direct connections for many UK businesses.

If the network is imagined as a person, the mobile masts would be the limbs, fingers and other extremities, the core would be the brain and the transport network would be the arteries pumping blood around the body. 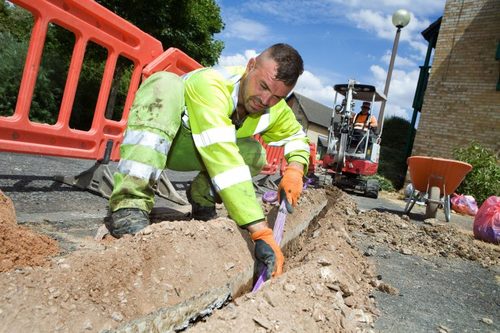 The task of making this aging C&W network fit for a 21st-century telco had started before Dona arrived. It has entailed what he describes as a "massive decommissioning" of the legacy estate.

Vodafone needed to figure out which sites were strategically important and which could be jettisoned in the interest of lower costs. It also had to standardize on the technology used across the entire footprint.

That C&W network has today evolved into what Vodafone calls Redstream. It is heavily based on a concept known as software-defined networking (SDN), which effectively separates the system brains (the control plane) from the system muscle (the data plane) and then centralizes the intelligence.

Supplied by vendors including Cisco, Ciena, Juniper and Nokia, what Vodafone is left with is a more "programmable" network to which "anything and anyone can connect and interface through standard APIs," says Dona.

The latest move is a deal with Ciena for its Blue Planet software. Described as a transport domain orchestrator (TDO), that software system is designed largely to improve automation and support the rollout of more on-demand, "network-as-a-service" offerings.

At the click of a button, Vodafone could, for instance, introduce a 5G network slice for customers demanding extra bandwidth combined with low latency. Business customers, explains Dona, would similarly be able to set bandwidth parameters and quality-of-service requirements from a web page.

Automation and greater reliance on so-called "digital" technologies have been priorities for Vodafone Group as it tries to save money. Through investments in those areas, it previously set a target of reducing annual operating costs by 1.2 billion ($1.4 billion) between 2018 and 2021.

"To run a core node for 5G, you don't need anybody," he said during a press briefing. "It is all automated and you use SDN to control it."

"We have been focusing heavily on moving to zero-touch NOCs, which means automating what we have in the NOCs," said Petty. Consequently, the number of employees in NOCs had dropped from 1,500 to the "low-single-digit hundreds" and Petty's expectation was that it would continue to fall.

"Five to seven years from now, there will be a very small number of people that run the NOC infrastructure," he said at the time. "The way we run networks is fundamentally changing."

Ciena, the company behind Blue Planet, reckons the pandemic has fueled interest in its software technology as more customers have made efficiency one of their strategic priorities.

"Customers are starting to accelerate trends we thought would be two or three years out," said Jamie Jefferies, who runs Ciena's EMEA business, during an interview with Light Reading earlier this year. Few operators would have gone so far as to "virtualize" their NOCs just a few years ago, he said. Now, many are taking that step.

But what made Vodafone opt for Blue Planet as opposed to numerous other TDOs on the market? "We have Ciena in our optical network and the great thing about Blue Planet is that it is vendor- and technology-agnostic and obviously communicates with the underlying IP and optical transport components," says Dona.

Vodafone now believes that its various investments in Redstream will provide a solid foundation for its imminent rollout of a mobile edge computing (MEC) service in partnership with AWS.

Announced in December, it will make use of an AWS technology called Wavelength and promises a massive reduction in latency, cutting roundtrip journey times on the network from between 50 and 200 milliseconds today to less than 10 in future. While Vodafone has not yet revealed how many Wavelength-equipped facilities it will need across the UK, the number is likely to be small thanks partly to Redstream, says Dona.

"I am inventing the numbers, but we would plan our MEC presence and say can I afford to have three to start off or do I need nine," he explains.

If that translates to a competitive advantage at the edge, Redstream will be able to claim much of the credit.