Deutsche Telekom, Germany's biggest operator, cut more than 4,000 jobs during the first three months of the year and has now offloaded more than 20,000, representing almost one tenth of its entire workforce, since the start of 2015.

The pace of cuts appears to have increased sharply this year, according to financial statements published earlier today, leaving the German incumbent with about 8,000 fewer employees at the end of March than it had exactly one year earlier.

Reductions have come despite healthy sales growth at Deutsche Telekom, which today shrugged off the impact of coronavirus and described itself as an "anchor" in the current turmoil.

With reported sales up 2.3% in the first quarter, to about 19.9 billion ($21.5 billion), the job cuts helped propel a 10% rise in adjusted earnings (before interest, tax, depreciation and amortization), to about 7.6 billion ($8.2 billion), compared with the year-earlier quarter.

Like many other service providers, Deutsche Telekom has been working to automate tasks usually carried out by employees and previously told Light Reading it was determined to boost annual sales per employee, a metric that is attracting interest in investor circles as an efficiency measure. 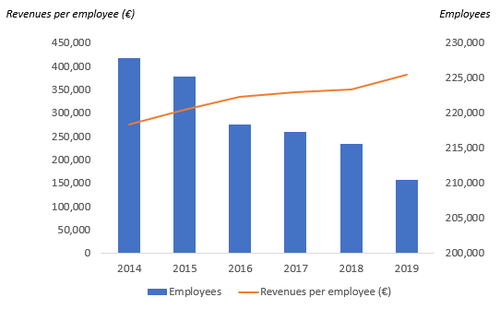 While Deutsche Telekom claims to have seen little business impact from the coronavirus outbreak so far, the pandemic is likely to spur automation throughout the telco business as operators are forced to shutter physical stores, network operations centers and other facilities.

Deutsche Telekom's latest financial report blames "seasonal effects" for the loss of about 2,000 jobs in the US market, where it has just completed a merger of its T-Mobile US business with rival Sprint. The other 2,000 cuts happened in Germany and Europe and were attributed largely to "efficiency enhancement measures."

"Savings in indirect costs, primarily thanks to lower personnel costs, had an increasing effect on earnings," said the company in the section of its report about earnings growth.

The tools operators are using to automate their businesses include artificially intelligent "chatbots" that can now tackle many of the customer queries typically handled by customer service assistants. Vodafone, a European rival to Deutsche Telekom, called out its own investment in a chatbot this week as it announced plans for another 1 billion ($1.1 billion) in cost savings over the next three years.

Vodafone has also been closing stores as an increasing number of customers buy their smartphones and device plans online. "As you know, we were embarked on a distribution transformation through digital and we think this will accelerate in the current environment" of the pandemic, said Nick Read, Vodafone's CEO, during a call with analysts this week.

Other changes include the rollout of software systems that have allowed operators to run their network operations centers (NOCs) with hardly any staff. Elisa, a Finnish operator, already claims to have a fully automated NOC and other European operators are similarly trying to empty their NOCs of employees.

Japan's Rakuten is demonstrating the possibilities on the infrastructure side as it builds an entirely new mobile network based on the latest cloud technologies and automation tools. Tareq Amin, the mobile network's chief technology officer, says the network operations team will never have more than 350 members of staff, compared with the thousands employed by each of Japan's older service providers.

Today's update from Deutsche Telekom comes about two years after it said it would target 1.5 billion ($1.6 billion) in cost savings outside the US market by 2021, with 750 million ($810 million) to come from staff reductions.

While it has not provided an update on that initiative since then, its latest results show its earnings margin (before interest, tax, depreciation and amortization) rose to 34.8% in the first quarter, from just 29.4% two years earlier. Headcount has fallen by 10,483 employees over that period.

In its annual report for 2019, the company said it expected automation to fuel earnings growth in Germany this year and in 2021. "For 2020, we expected adjusted EBITDA AL [earnings before interest, tax, depreciation and amortization, after leases] of around 8.9 billion [$9.6 billion], driven in particular by revenue growth and a simultaneous reduction in indirect costs, mainly through digitization and automation," it said.