Ukraine has made Huawei even more toxic for European telcos

Not since Napoleon's frostbitten troops crawled out in December 1812 have Westerners looked so desperate to quit Russia. The mass exodus of companies continued this week, whether to comply with government sanctions or in protest at Vladimir Putin's invasion of neighboring Ukraine. Fearing the reputational consequences of staying behind, fast-food chain McDonald's  whose golden arches have come to symbolize US capitalism  closed its 850 Russian outlets on March 11. Other retailers have done the same.

The telecom world's Ericsson and Nokia moved relatively quickly to halt deliveries to Russian operators last week. Their reliance on US-origin technologies meant continuing to supply companies such as MegaFon, MTS and VEON would have risked violating US sanctions. Regardless of those, any move to resume work could turn into a public-relations nightmare while companies in other sectors try to extricate themselves from Putin's economy. 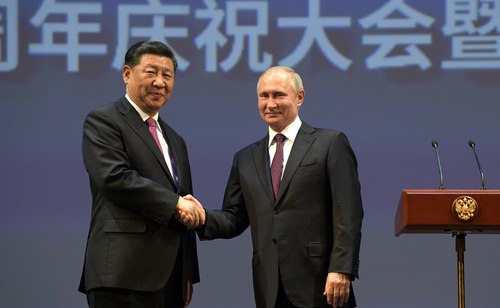 But one telecom firm with a huge Western presence continues to supply Russia. Huawei, the world's largest producer of network equipment, generated sales of nearly $29 billion across Europe, the Middle East and Africa in 2020. With offices and staff throughout Europe, it remains a key supplier to some of the region's biggest operators. It is a Chinese company, with headquarters in Shenzhen, but has always claimed independence from Chinese rulers who have refused to condemn Putin. To critics, its alignment with the official Chinese position will make those claims ring even hollower.

Westerners with links to Huawei are already moving to distance themselves from the company. On March 10, Sir Andrew Cahn and Sir Ken Olisa, two non-executive directors of Huawei UK, were reported to have tendered their resignations over Huawei's apparent unwillingness to object to Russia's invasion of Ukraine. Days earlier, Huawei was said to have helped maintain Internet services in Russia after international hacker groups tried to bring them down. Polish footballer Robert Lewandowski, who plays for Bayern Munich, is reportedly terminating a deal with Huawei because of its Ukraine stance.

The situation threatens to become extremely awkward for the European operators that still buy Huawei's products. UK operators were already severing ties (albeit reluctantly) after the British government in 2020 said they would have to remove all 5G equipment from Huawei by the end of 2027. More recently, it has banned them from buying Huawei's fiber products. Those moves came in response to US pressure and were justified on the basis that Huawei's links to China make it a security threat. Other countries have also announced restrictions. But where they do not exist or remain limited, some operators are still heavy users of Huawei.

European telcos' reliance on Huawei was previously illustrated in a report by Danish advisory group Strand Consult. Published in 2020, it showed that Vodafone was then buying nearly 62% of its 4G radio access network (RAN) products from the Chinese company. In response to European government concerns, CEO Nick Read promised to jettison Huawei products in the core, the sensitive control center of the network. But outside the UK he has made no apparent effort to change RAN suppliers. 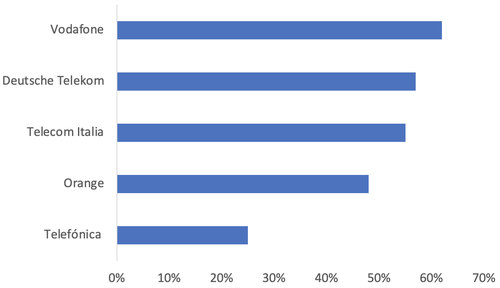 German incumbent Deutsche Telekom is another major customer, having bought about 57% of its 4G RAN products from Huawei, according to the Strand Consult report. Much of its German 5G network now comes from Huawei, with Sweden's Ericsson named as the only other supplier.

France's Orange also identifies Huawei as a critical vendor and used its products across 48% of the European 4G footprint back in 2020. "There is no absolute rule in the group of saying we are not going to work with Huawei anymore," said Orange Europe CEO Mari-Noëlle Jégo-Laveissière at a press conference last October. Spain's Telefónica has taken a quarter of its European 4G RAN products from Huawei and relied on it heavily for a German 5G network. Around 55% of Telecom Italia's 4G RAN products have come from Huawei, reckons Strand Consult.

Are these operators now reassessing their relationships with Huawei after Russia's invasion of Ukraine? Telefónica and Orange declined to comment, and none of the others had answered that question at the time of writing. But if individuals such as Cahn, Olisa and Lewandowski were concerned about their links to the Chinese kit vendor, the companies that have fueled its revenue growth outside China are likely to be worried too.

The problem is twofold. First, Huawei's seeming alignment with China over Ukraine provides ammunition for US critics who have long argued it is a Chinese government stooge and not to be trusted. Russia would not matter all that much to Huawei from a sales perspective. Figures provided by Dell'Oro, a market research firm, suggest the upper limit of Huawei's RAN sales to Russia is $420 million annually, a drop in its $100 billion ocean of revenues.

While it also sells other network products and consumer gadgets, these are unlikely to account for a sizeable share of its business. Cutting out Russia might have burnished Huawei's reputation in the West. Critics will argue geopolitics has taken precedence over commercial considerations, although any company not prevented by government sanctions from selling products is bound to worry about breach of customer contracts.

Perhaps more importantly, European customers will fear being tarnished by association. For similar reasons, UK mobile operator Three yesterday canceled its sponsorship of Chelsea football club, which has grown rich under the ownership of Roman Abramovich, an oligarch believed to be on friendly terms with Putin. The worst-case scenario for a company like Deutsche Telekom  eager to be viewed as a good corporate citizen  is being accused of paying a firm that helps to prop up Putin's regime.

All this conjecture will make some observers very uncomfortable. The entanglement of private enterprise and the public sector is often a feature of extremist politics. With the Russian exodus, organizations from Apple to Starbucks seem to be in lockstep with government. And operators reliant on Huawei could not possibly have predicted a war in Europe that could reshape the world. It is at a point not seen for more than 80 years.