Three UK is having a year to forget.

Mounting expenses and customer losses have smashed a gaping hole in profits for the first six months of the year, according to figures published today by CK Hutchison, its Hong Kong parent.

The UK service provider, which operates the smallest of the country's four mobile networks, saw its operating income halve, to just £86 million ($113 million), compared with the same part of 2019. 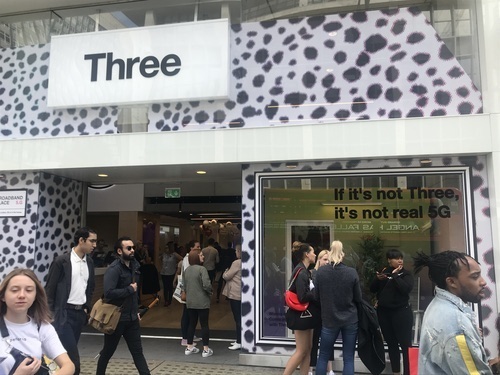 Sales dipped 4%, to about £1.1 billion ($1.4 billion) after about 700,000 "active" customers  that is, people who actually use their service  absconded in the preceding year, leaving Three UK with about 9.5 million customers altogether.

Meanwhile, average revenue per user was 6% lower in June than a year earlier, at £12.62 per month.

It could have been much worse during the pandemic. The defectors were all lower-spending prepaid customers, and the number of more lucrative contract subscribers ticked up 1%, to nearly 7.3 million.

But converting more prepaid customers to contract plans would have been preferable. Some may simply have switched provider, with Vodafone gaining 260,000 customers over the same period.

There was also no sign of any uplift from Three's heavily publicized entry into the residential broadband market. Last year, it began using 5G technology as an alternative to the copper, fiber and cable connections provided by BT, Virgin Media and smaller firms.

After so much fanfare at launch, the lack of a single reference to that service suggests it may have flopped.

Bad student
Nevertheless, profits would have been somewhat healthier were it not for an additional £49 million ($64 million) in semi-annual operating costs, year-on-year, putting the overall bill at £351 million ($461 million) in the first half.

Victor T K Li, CK Hutchison's chairman, singled out the UK business and its spendthrift ways like a teacher admonishing a bad student.

Some of Three UK's senior executives have already been expelled, it seems. "Senior management in the UK operation has been replaced during the year and meaningful improvements have been seen," he wrote in the company's report.

Expulsion was not how it necessarily appeared at the time. Dave Dyson, Three UK's erstwhile boss, was said to have quit for personal reasons in March, when Robert Finnegan was announced as the new CEO of both Three UK and Three Ireland.

Dyson would, according to the update, continue to serve as a board member and "senior executive resource" to CK Hutchison.

If he left for personal reasons, no explanation had been forthcoming a few weeks earlier when Phil Sheppard, Three UK's networks chief, and Graham Marsh, its head of core technology, were revealed to have gone.

None of those executives could be held accountable for the "escalating annual license fees" that Li called out.

But as technology executives, both Sheppard and Marsh would presumably have been involved in network and IT decisions that now raise questions.

During a press briefing in April last year, Dyson revealed that between 700 and 800 technology jobs  representing 13% to 15% of total headcount at Three UK  would disappear as part of a deal with Microsoft Azure.

The cloud giant was in the process of taking over full management of Three's IT systems, Dyson said. The decommissioning of the older in-house platforms would supposedly cut IT costs  accounting for about one tenth of total expenses  by a third.

That decommissioning should have been completed at the prepaid business in December. "We'll progressively introduce it for contract customers starting in the fourth quarter," said Dyson at the briefing.

Yet Li blamed the decline in CK Hutchison's European telecom profits partly on "continued IT transformation spend" at Three UK.

Investors would be right to ask when the planned cost savings will start to feed through.

Risky business
What Li failed to mention was the risky appointment of Huawei as Three UK's sole supplier of a 5G radio access network (RAN).

Dyson defended that decision to Light Reading a year ago, when UK authorities were already under US pressure to ban the controversial Chinese vendor.

"I don't want to wake up in 12 months' time and regret a decision to slow things down on the basis there might be a decision one way or another," he said. "For us it's full steam ahead, and there is a brilliant opportunity on 5G to give customers what they want."

Even if he is longer in charge, Dyson did not have to wait a full year.

In July, the UK government banned Huawei from selling any 5G RAN products to UK service providers after December 31. By 2028, operators will need to have removed all Huawei 5G products from their networks.

Regardless of the debate about national security, Three's Huawei decision always looked suspect.

These days, few technology executives at service providers want to be totally reliant on one supplier in such a critical area. BT, O2 and Vodafone, Three UK's rivals, have each split RAN work between at least two vendors.

In fairness, Three used Finland's Nokia as a 3G supplier and South Korea's Samsung for its 4G network. But the deal with Huawei entails replacing Samsung's 4G equipment as well.

Once 3G is phased out, Three will be entirely dependent on Huawei. Or it would have been, had the UK government not acted as it did.

Company bosses are now in the process of choosing a second supplier. Unless there is an abrupt and unlikely change in government policy, they will eventually need to extract the first.

On the plus side, a large majority of Three's 16,000 mobile sites do not currently feature any Huawei technology, Light Reading has learned. By the start of 2028, the deadline for the Chinese vendor's removal, Three would be starting a new upgrade cycle regardless.

Unfortunately, beyond December 31, Three will not be able to make improvements to the Huawei parts of its network in the meantime.

While Three's capital expenditure was up 24% in the first six months, to £192 million ($252 million), the 5G rollout is probably now on hold until a second supplier is identified.

Last August, Dyson told Light Reading he was eyeing a doubling in the size of Three's business, driven by opportunities outside its mainstream mobile business.

Right now, the defense of that business may be consuming Three's full attention.