Amid relentless competition from Roku, Google and Apple for pole position in the streaming platform race, Amazon unveiled more than a dozen smart TVs running its Fire TV platform along with the debut of a next-gen "Cube" device.

Among the new crop is an Amazon-Best Buy team-up on a 65-inch Fire TV Edition TV from Toshiba equipped with Dolby Vision that will go on sale in the US next month for $599. 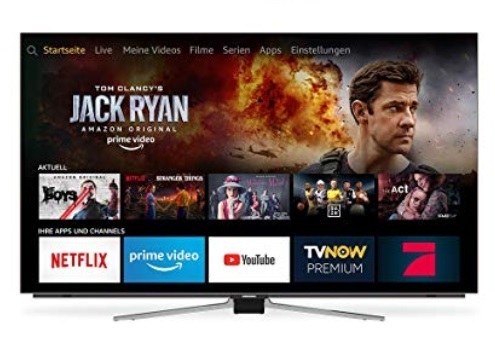 Available for pre-order starting at 1,299.99 ($1,433), the Grundig OLED Fire TV Edition Hands-Free with Alexa will be available in 55-inch and 65-inch models and begin shipping on November 21.

Amazon, which teamed with Grundig on the first OLED TV running Fire TV and built-in far-field voice control, also announced partnerships with Dixons Carphone, MediaMarktSaturn and Grundig to sell its new generation of Fire TV Edition sets in the UK, Germany and Austria.

Borrowing a page from the Roku playbook, Amazon also introduced a Fire TV Edition soundbar in partnership with Anker Innovations. That product, the Nebula Soundbar, is available for pre-order for $229.99.

Amazon also broadened its standalone device portfolio with a new Fire TV Cube that launches today in the US for $119.99 along with first-time availability in the UK, Germany and Japan. The new device supports Dolby Vision and 4K video at up to 60 frames per second and a voice controller that lets users play and pause streams and search for content without a remote.

Amazon is expanding its device lineup, smart TV partnerships and global reach as it continues to face fierce completion with Apple, Google (Android TV and Chromecast) and Roku, which has its own line of media streaming players and smart TV integration deals with partners such as TCL, Hisense, JVC, Sharp, Philips, RCA and Westinghouse, among others.

Amazon also announced that Fire TV has more than 37 million "active users" around the globe. Amazon, which is also eyeing ways to team up with pay-TV providers, introduced its first Fire TV device in the spring of 2014.

Last month, Roku said it ended Q2 2019 with 30.5 million active accounts, and claimed that one in three smart TVs sold in the US in the first half of 2019 operated its platform.

Apple hasn't refreshed its Apple TV platform since 2017 with the introduction of its 4K-capable box. According to MacRumors, Apple could unveil the next generation of the Apple TV next Tuesday (September 10) at its fall event.