Ting Tunes Up Its TV Plan

After serving up competitive, fiber-fed broadband services in a batch of US markets, Ting is nearing the introduction of its next act: pay-TV.

The Ting TV service is currently in a "closed beta" and on track for a commercial launch in the first half of 2019, according to a company official.

Rather than working with DirecTV Now, fuboTV, Sling TV or one of several other OTT-TV providers that have come on the scene in recent years, Ting has instead decided to develop its own IPTV service. Ting has yet to announce all of its technology and vendor partners for the coming TV service, but has confirmed a couple -- France-based Anevia for transcoding and Denmark's Nordija for middleware.

Ting TV also has not revealed pricing and packaging, but the teaser site notes that it will deliver more than 120 channels in HD, with options for "skinny" lineups focused on local broadcast TV, and aim to eliminate "hidden fees," including broadcast, regional sports and HD technology fees.

Update: In more details provided today, Ting noted that the new TV service will require a subscription to its Gigabit Internet service, and that Ting TV will offer two packages  a basic and expanded package, with premium channels that can be added on. There will also be an option for customers to forgo local broadcast channels from Ting and instead receive those channels over-the-air with a digital antenna and, in turn, get a discount on their monthly bill.

Ting TV subs will also be able to access the service in-home via an app for retail streaming devices such as Amazon Fire TV players and sticks and Apple TV boxes, along with an option to rent a device from Ting. A blog about plans for Ting TV posted last year suggests that it will also feature a cloud DVR and allow customers to access content on mobile devices. 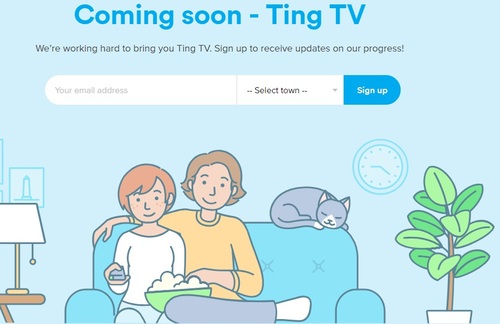 Prospective Ting TV customers can provide their contact info and be alerted when the new service becomes available.

A recent posting by a Ting employee on a company message board associated with the TV offering suggests that the service could launch in April or May.

Bullish about the bundle
Though cable and satellite pay-TV incumbents have had trouble hanging on to video customers, Ting believes there's upside in adding TV to a service bundle.

"Our Ting TV rollout is coming along well," Elliot Noss, president and CEO of Toronto-based Ting parent company Tucows, said on the company's recent Q4 earnings call, according to this Seeking Alpha transcript. "We have a long list of prospects who have indicted interest on our website. Those prospects are almost entirely non-Ting Internet customers, which validates our hypothesis that many people have been waiting on the sidelines for us to offer traditional television."

Noss noted that Ting TV will allow subs to forego renting a box, but acknowledged that Ting will still have to operate the service within the financial confines of the programming deals it can strike.

"A lot of the TV experience is dictated by the major content providers," he said. "So, we cannot shatter conventions quite as much as we would like. But we are trying and, so far, people seem very excited about getting cable TV without the cable company."

Noss added on the call that Ting purchased a piece of land in Centennial, Colo., last year that will serve as the company's main West Coast data center and its West Coast headend for the new Ting TV offering.

Ting's fiber and broadband footprint isn't huge, but the company could cause some headaches for incumbent cable operators and telcos in the pockets where it's available.

On the Q4 call, Noss noted that the company had signed a deal with a private partner for an additional "Ting Town," in which the partner will build and own the network and Ting will provide service. Ting hasn't revealed it yet.

In addition to 1-Gig broadband in select markets, Ting also sells a mobile service via MVNO deals with Sprint (for CDMA coverage) and/or T-Mobile (for GSM coverage). Ting ended 2018 with about 162,000 accounts and 296,000 subscribers.

Q4 2018 network expenses increased 15%, to $4.4 million. Ting has allocated $35 million of capex for its fiber-related activity, and $13 million for data centers that house the company's network electronics and as a termination point for its local fiber networks.