If you're in the OTT video world and you're not giving some premium fare away for free in exchange for advertising, then perhaps you're just not trying hard enough.

After all, the market's chock-full of these kinds of streaming services -- Tubi, Crackle, Pluto TV, Wurl Inc. , Xumo and The Roku Channel. Walmart-owned Vudu also offers a library of AVoD with its "Movies on Us." And that's merely a small representative list. (See Comcast Adds Tubi to X1's OTT Video Blend .)

Amazon.com Inc. (Nasdaq: AMZN), which has long sequestered its video services under the dome of the subscription model, broke beyond that barrier with the launch of IMDb Freedive, an ad-supported service that is being offered via the IMDb service Amazon bought in 1998. (See Amazon's IMDb Launches Free Streaming Channel.)

Available on web browsers and as an app on Fire TV devices, it has come out of the chute with some catalog titles, such as Memento and Monster, and some originals from IMDb itself. In addition to voice search through Alexa integration, another nice touch is support for IMDb's X-Ray that includes readily accessible detail about a show's or movie's cast and crew, and some tidbits of trivia tossed in. 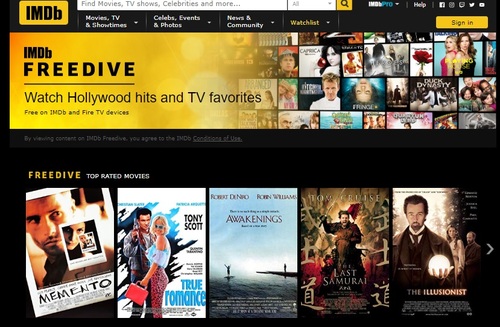 Amazon will try to use IMDb's massive reach on the web and its mobile apps to lure eyeballs to Freedive.

The launch wasn't unexpected, as rumors that Amazon had plans to develop and debut an AVoD service using the IMDb brand surfaced last year. While Freedive does add more ad inventory to the OTT mix and represents competition to other players in the sector, the grander battle has to do with adding value to the streaming platform itself -- and Fire TV, in this case. Colin Dixon, nScreenMedia 's chief analyst and founder, said just weeks ago that Roku's move into the subscription field would force Amazon's hand quickly on the free side. (See Roku Targets Amazon With 'Premium Subscriptions'.)

"The big deal is you want your device to be the person's default device," Dixon said. "That means all incremental sales come to you... whether it's getting incremental ad dollars or it's from renting a movie, or buying a title, or taking a subscription service. It's all about winning that battle."

Amazon is using IMDb for Freedive to make it crystal clear that the service is indeed free and well in front of its subscription walls. It will enjoy the added benefit of getting the new AVoD service deployed on IMDb apps when consumers update them, Dixon said.

Despite IMDb's reach (250 million unique monthly visitors to its Web site and north of 150 million downloads of IMDb's mobile apps worldwide, according to the company), Amazon might've been better served by also adding it as a free tier to Amazon Prime and using it as an upsell tool for subscriptions. "I would think it's a missed opportunity," Dixon said.

But the move to AVoD "is a good move for them" on that grander, platform-focused basis, he added. "They absolutely needed to do that."