Comcast to stream CBS All Access on X1 and Flex boxes

Comcast has become the first pay-TV provider to strike a deal to integrate and distribute CBS All Access, the programmer's subscription streaming service that features a mix of on-demand, live content and original shows that are exclusive to the OTT service.

That integration was a key piece of a new carriage agreement between Comcast and ViacomCBS announced Wednesday that also includes distribution of CBS-owned broadcast TV stations in 15 markets, Showtime, CBS Sports Network, Smithsonian Channel and Pop TV. Financial terms were not disclosed.

But the big new thing will be distribution of CBS All Access, which is being used as a vehicle for new, exclusive series from the Star Trek franchise, including Star Trek: Discovery and Star Trek: Picard, which is set to premiere on the OTT service on January 23. 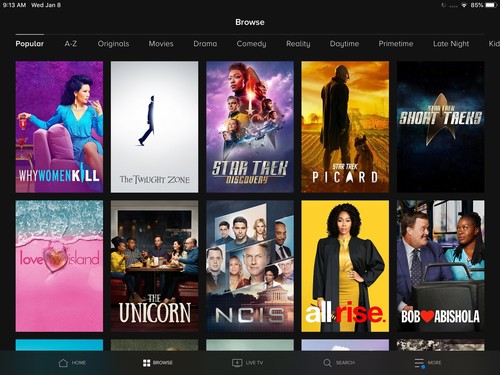 CBS All Access is currently available on a wide range of retail streaming platforms, including iPads (shown here). Under the new Comcast deal, CBS All Access will also be offered on the cable operator's X1 and Xfinity Flex boxes.

Comcast said it will integrate the CBS All Access service on its X1 and Xfinity Flex boxes "later this year." X1 is the brand for Comcast's next-gen, fully fledged pay-TV platform. Xfinity Flex is a video streaming/smart home service that Comcast is offering to broadband-only customers for no added cost.

Why this matters
For ViacomCBS, the integration on both X1 and Flex boxes should provide a new growth channel for the CBS All Access streaming service and build on its direct-to-consumer sales model. The new deal with Comcast should signal that other pay-TV providers will seek out similar deals involving CBS's OTT serviced when carriage renewals come up.

For Comcast, the CBS All Access component expands its strategy to tightly integrate traditional TV and OTT content on operator-supplied set-top boxes, whether those boxes are for Comcast's full X1 service or for its newer, OTT-focused Flex offering.

In additon, the integration brings another popular, premium-level OTT service to Flex, which will also be used as a vehicle to upgrade broadband-only customers to Comcast's full pay-TV service.

Comcast is also open to bringing third-party, virtual multichannel video programming distributors (vMVPDs) to Flex and broadening the amount of live TV streaming it offers on that platform.

During a briefing this week at CES in Las Vegas, Comcast SVP and CTO Matt Zelesko said Comcast is looking at the possibility of integrating vMVPDs on Flex but has not made any formal commitments. Comcast does plan to integrate Hulu's SVoD service into X1 and Flex, but has not announced similar intentions involving Hulu's live TV service. Comcast has also integrated Sling TV's international programming packages but not the OTT-TV provider's baseline pay-TV packages.