Telstra is further speeding up its 5G rollout, aiming to reach 75% of the population by the middle of next year, and widen its lead over competitors.

The accelerated investment follows the decision in March to bring forward A$500 million (US$360 million) in 5G investment to help stimulate the economy. 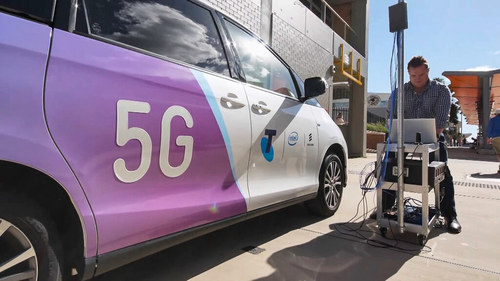 Cruise control: Telstra has speeded up towards the 5G finish line – with rising prices bringing up the rear.
(Source: Telstra)

CEO Andrew Penn said Telstra's 5G network had already reached around a third of Australia's population, and was now rolling out in 53 towns and cities.

"This investment means we have been able to accelerate our rollout of 5G, while injecting much-needed investment into the Australian economy at this time," he said in a blog post on Monday.

He also took a swipe at rivals Optus and TPG Telecom over Huawei, accusing them of making "the wrong choices on their suppliers of network technology from a security perspective."

Price hike
Telstra launched its 5G service in May 2019, and now has 210,000 subscribers, although until now it has not charged them extra for 5G.

It restructured its pricing plans on July 1, effectively raising mobile prices by between A$5 to A$15.

This drew a response from Optus marketing head Matt Williams, who said increasing prices at the height of the pandemic was "tone-deaf," and promised Optus would freeze prices until the end of 2020.

However, with its limited coverage, Optus 5G is focused less on mobile and more on the home broadband market, where most Australians are limited to a modest broadband experience on the copper-centric NBN.

It has just released a wholesale package to help MVNOs to sell home broadband.

Parallel lives
While 5G is gathering pace in Australia, it has barely arrived in neighboring New Zealand.

The number two operator, Spark, has finally come to market with a mobile 5G service.

Tellingly it is making its debut not in the major commercial centers, but in the midsized city of Palmerston North, with plans to offer it in four more unnamed locations by the end of the year.

But it did not obtain key 3.5GHz spectrum until May, when in response to the pandemic the government canceled the planned auction and allocated spectrum directly.

Rival Vodafone New Zealand, which launched 5G as an LTE network overlay last year, says it upgraded 124 4G cell sites across the country in the first six months of the year to cope with a 40% spike in demand and to prepare for 5G.