Braced for the full impact of coronavirus in the current quarter, executives at Russia's MTS are hopeful that an aggressive charge into "digital" services can mitigate some of the damage the pandemic will cause.

The outlook for this fiscal year has certainly grown less optimistic. In March, the service provider, which generates almost 99% of its revenues in Russia, expected sales growth of 3% and roughly the same amount of operating income before depreciation and amortization (OIBDA) it made last year. Today, it forecast zero sales growth, at worst, and a 3% increase only in the best-case scenario. OIBDA could shrink up to 2%, it warned.

But that is not so bad, compared with the outlook for many other businesses, and MTS had an undeniably strong start to the year. First-quarter revenues were up 9%, to nearly 120 billion Russian rubles ($1.7 billion), compared with the year-earlier period, while OIBDA rose 5.6%, to RUB51.5 billion ($720 million), after deducting a large one-off item from last year. Net profit increased 0.8%, to RUB17.7 billion ($250 million). "All our business lines contributed to this growth," said Andrey Kamensky, MTS' chief financial officer, on a call with Light Reading.

Along with Russia's other big telcos  but arguably with greater success  MTS has plowed into digital services as the next growth opportunity in a saturated mobile market. Operating across sectors including finance, entertainment, media and IT, its app-based digital ecosystem catered to about 22 million customers at the end of March, up from 15 million a year earlier. To put that growth in context, MTS' Russian mobile business added about 1 million customers over the same period, giving it 78.5 million in total. 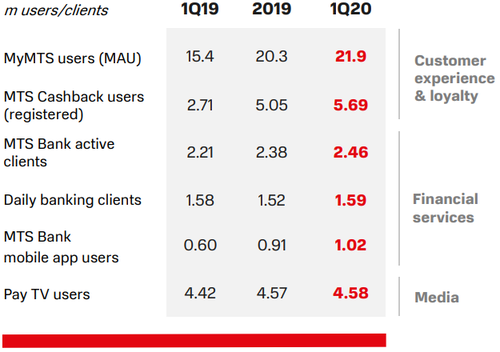 Revenues from services adjacent to telecom have risen accordingly. In banking, for example, MTS registered growth of nearly a third, to RUB8.3 billion ($110 million), while the systems integration business reported an 11% increase, to about RUB2.5 billion ($35 million).

Even so, it is still to its mobile connectivity business that MTS looks for the bulk of its revenues. Combined with year-on-year subscriber growth, price rises there were largely responsible for the headline sales improvement. All that was before the virus became a serious problem, though. "We saw it more in April and now in May," says Kamensky.

The overarching risks are now in several areas, but especially mobile roaming, financial services and retail. Travel is obviously down, and branch closures are hurting the banking and retail arms. In a presentation about the latest numbers, MTS estimates that about one-third of its 5,510 stores will temporarily shut at some point during the second quarter.

On the plus side, churn is likely to fall this quarter, partly offsetting the impact of a decline in customer growth. More importantly, the pandemic could now provide a spur to the use of digital services, as shops close and consumers remain at home. "The current situation has made it very clear that overall digital transformation is accelerating," says Kamensky. "It is clear now that we will put more money behind the promotion and development of our digital products."

MTS is committing between 15% and 20% of its capital expenditure to digital products and this year plans to spend about RUB90 billion ($1.3 billion) in total. That would be roughly RUB1.5 billion ($21 million) less than it invested in 2019 but represent a substantial increase on the RUB76.4 billion ($1.1 billion) it spent in 2017. A 5G launch in some parts of Russia could happen if authorities release spectrum this year.

For MTS, digital transformation also holds out the prospect of cost savings as physical stores make way for online sales channels. The number of outlets has already fallen from 5,863 this time last year (to 5,510 now), while revenues from online sales rose 65%, to nearly RUB3 billion ($42 million), in the first quarter. "We believe it can be even higher now and for the future," says Kamensky.

An increase in profit margins is not expected, however, and nor would it be a sensible target, as far as Kamensky is concerned. Besides coronavirus challenges and the costs associated with store closures, MTS has faced the need to hire additional employees for new business activities. In Russia, its workforce gained about 900 members of staff last year to comprise 60,972 in total. "Now we are seeing that certain optimization might come in areas like retail, but we want to keep this headcount in our product teams not impacted," says Kamensky.

Ultimately, the goal is to boost sales and profits "in absolute terms" by encouraging subscribers to buy more and more products from MTS. To support that ambition, MTS has continued to bulk up in the fixed-line sector through takeover activity, acquiring a broadband and TV company called Zelenaya Tochka, which provides services in about 12 Russian cities, as recently as February. Takeovers are more efficient than building from scratch, says Kamensky, as MTS works on expanding its presence outside Moscow, where it already owns the incumbent network.

The MTS approach might not be unique on the world stage, but the Russian service provider has made greater progress and fewer blunders than some of its domestic and international peers. As it morphs slowly into a one-stop shop for digital services, it has a visible path to a future as more than just a connectivity player. Strange as it sounds, the pandemic might just have an upside for Russia's largest operator.