The FCC provided some much-needed clarity at today's meeting of the Broadband Deployment Advisory Committee. Speaking on behalf of Chairman Ajit Pai's office, Senior Counsel Nicholas Degani declared that the agency's intention in creating model codes for broadband deployment is not to impose a federal mandate. Although the BDAC is tasked with providing recommendations for accelerating broadband rollouts nationally, the FCC does not intend to use those recommendations to assert new regulatory authority over cities and states.

The update from Chairman Pai's office helps clear up confusion over the Federal Communications Commission (FCC) 's role in upcoming wired and wireless network deployments. Namely, it assures states and cities that the federal government won't step in to override their jurisdiction when it comes to issues like assigning fees to telecom providers in exchange for access to utility poles and creating timelines for pole attachment permit approvals.

While the current FCC, on principle, isn't interested in creating new regulations, it is heavily focused on aiding the telecom industry in that group's efforts to make more broadband services available. Creating a federal model for future deployments would make life easier for telcos -- both incumbents and potential new entrants to the broadband market -- who hate having to deal with different rules for deployment in every municipality across the country. However, it would also preempt the authority of state and local officials, who have strong opinions of their own on how access to public rights of way should be granted. 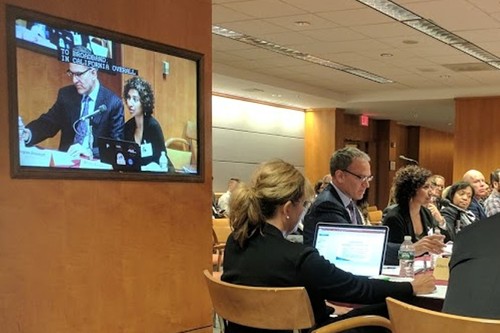 Of the participants on the BDAC, those representing municipalities were particularly happy with the FCC's clarification. However, the update didn't mitigate their concerns about the trend toward states preempting municipal authority. For example, Shireen Santosham, CIO for the city of San Jose and an alternate to the committee for San Jose Mayor Sam Liccardo, pointed out that new state laws that impose caps on utility pole access fees can have unfortunate consequences, like threatening the revenue that cities intend to use to fund digital inclusion initiatives.

As officials from the city of Austin have previously explained, low state caps can even make it difficult for municipalities to recoup their own costs in managing the permitting process, particularly as the volume of requests is predicted to explode with the emergence of 5G wireless networks. (See Battle Begins for Small Cells, Smart Cities.)

Santosham also noted that there are only seven municipality representatives assigned to the BDAC process, and she suggested that, "The voice of municipalities perhaps needs to be broader."

Others on the FCC committee also piped up with the same concern. Perhaps most surprisingly, Comcast Corp. (Nasdaq: CMCSA, CMCSK) Vice President for Regulatory Policy David Don pointed out that if the group wants cities to employ the model codes that are developed, it will very much help to have their buy-in from the beginning.

"I think this is a serious risk right now. We have a lot of groups who are concerned that they're not at the table," said Don. "I think if just at the end we present a model code to the municipalities and they feel they've had an insufficient amount of input, it's going to go nowhere."

From a telecom industry perspective, Kelly McGriff, General Counsel at Southern Light (now Uniti Fiber ), did emphasize at the BDAC meeting that service providers need a better way to accelerate the process of deploying broadband equipment. He recounted T-Mobile US Inc. 's experience with a "large American city" where the company is currently at 120 days and counting in trying to get permit approvals to install equipment that would bring connectivity to an underserved community. That, he suggested, is a case where having a statewide rule limiting permit approval timelines would be helpful.

Jonathan Adelstein, CEO of the Wireless Infrastructure Association, also pointed to the fact that ten states currently have such laws on the books, and recommended that BDAC participants consider those laws in their model code development.

But again, municipal representatives expressed their concern over state-level mandates.

"To me," said the committee's newest member Andy Huckaba, City Council member from Lenexa, Kansas, "it feels a little bit like [the states are saying] 'we're going to grab this.' "

The multiple working groups within the BDAC are scheduled to present their recommendations on accelerating broadband deployment to the full committee in October or November of this year. After that, the committee will deliberate and vote on final recommendations to provide to the FCC.

kq4ym 8/3/2017 | 1:52:11 PM
Re: No mandate. While as noted the "agency's intention in creating model codes for broadband deployment is not to impose a federal mandate," I'm not so sure I'd call it a "carrot." It seems it more of a lets stop regulating for awhile and see if the marketplace can take care of itself. While maybe not so good eventually for consumers, we'll have to wait and see how it all works out for the the next several years.
Reply | Post Message | MESSAGES LIST | START A BOARD

KBode 7/21/2017 | 1:58:17 PM
Re: No mandate. "However, I am aware that not all communities act in good faith. And that many just don't know what's reasonable or don't have the resources to deal with managing telco relationships effectively."

Yes, each city is different. I remember when telcos were pushing into video local franchise reform was uniformly demonized because SOME cities were difficult in franchise negotiations and asked for too much. The "solution" was state-level video franchise laws that worked in some areas, but in others gutted consumer protections and in some locations -- even eminent domain rights.

msilbey 7/21/2017 | 9:33:49 AM
Re: No mandate. There's got to be some happy medium as far as the fees are concerned. Cities shouldn't find themselves out of pocket when having to manage the permitting process. There is an administrative burden there. And, given that telcos are using public assets, it's reasonable for the government managing those assets to want to something besides just an at-cost return. Municipal officials need to advocate on behalf of their citizens, and that means working for benefits like public WiFi services and digital inclusion programs that help get more people connected.

However, I am aware that not all communities act in good faith. And that many just don't know what's reasonable or don't have the resources to deal with managing telco relationships effectively.

Ultimately, making more broadband services available to more people is good for everyone. The more everyone understands that, and what the actual costs and benefits involved in this process are, the better. The communities that do this well should come out on top, and hopefully that will be an incentive to others to follow the same path.
Reply | Post Message | MESSAGES LIST | START A BOARD