Good News for Google at the FCC

WASHINGTON -- One of the big battles Google Fiber and others have fought as they try to enter the broadband market is resistance from incumbent providers to new pole attachments. But a vote today by the FCC's Broadband Deployment Advisory Committee (BDAC) could lead to a streamlining of the process, making it both easier and significantly faster for new providers to get up and running with a competitive broadband service.

The BDAC voted today to recommend a One Touch Make Ready (OTMR) policy whereby for any simple pole attachment -- i.e., where there is no expectation of an outage or possible facility damage, and where this is no splicing and no relocation of equipment required -- a new provider can proceed with installing equipment after a 25-day window of review.

That review period includes assessments by the pole owner and by the existing operators with equipment already on the pole. If there is an objection to the installation, it has to be on the grounds that the contractor chosen for the work doesn't meet safety or reliability qualifications. A list of approved contractors is maintained by the pole owner, but a new service provider can recommend additional contractors as long as safety and reliability requirements are met. 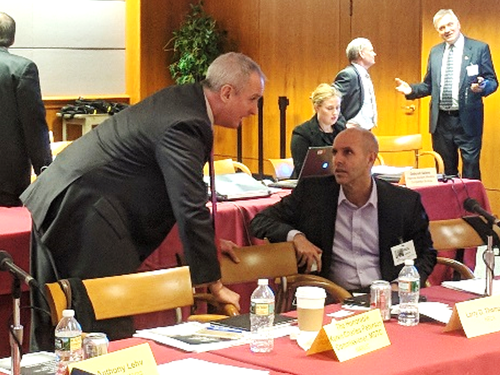 Google's John Burchett (seated) holds a side conversation during a break in the BDAC meeting.

Why is this such a big deal? Because traditionally, new market entrants might have to negotiate with pole owners and multiple incumbent network operators in order to get their equipment installed; a process that can take many, many months.

The scenario goes something like this: a new provider makes a deal with a pole owner, but then has to seek permission from one incumbent to make changes, and then another and another, all in sequential order. In 2016, after four months in Nashville, Tenn., Google Fiber Inc. had only managed to make 33 poles ready for equipment installation. That's 33 poles in four months out of a total of 44,000. (See Broadband Has a Problem on the Pole.)

The OTMR proposal would change the rules of deployment. Any simple attachment -- which providers say make up 80% of total attachments -- could be undertaken not in months, but within weeks. In theory, that should lead to faster broadband deployments and more competition in the service provider space.

"We're very happy the BDAC has endorsed One Touch Make Ready," John Burchett, head of policy at Google Fiber, told Light Reading after the vote. "I think it could make a dramatic improvement to new attachers."

There is a catch, however. While the BDAC is making informed recommendations to the Federal Communications Commission (FCC) , there is no guarantee that the FCC will act on them. In fact, Burchett says there's been no guidance so far on what will happen next after the BDAC makes its report.

And the OTMR proposal has one serious detractor among the BDAC members. AT&T Inc. (NYSE: T)'s representative on the committee, Chris Nurse, assistant vice president of legislative and external affairs, voted against the new recommendation. AT&T has major political influence in Washington and could still shape the course of future policy.

For now, Google Fiber and other young Internet providers will have to take the win where they can get it. But perhaps the fight means that Google is still serious about expanding to new markets as an ISP?

As to that, only time will tell.

kq4ym 2/5/2018 | 12:51:32 PM
Re: Compromise I can just now imagine some stonewalling or "pole walling" as objections are raised when "a new provider can proceed with installing equipment after a 25-day window of review," and the reviewer comes up with all sorts of things they don't like probably calling for some delays, although not as lengthy as they are currently.
Reply | Post Message | MESSAGES LIST | START A BOARD

Joe Stanganelli 1/26/2018 | 6:00:32 PM
Re: Pole Congestion is a big barrier to entry - Incumbents know it too. @brooks7: In that regard, I think it's all going to come down to the most powerful MVNO partnerships. VZ+Comcast comes to mind -- and then the two can battle it out from there.
Reply | Post Message | MESSAGES LIST | START A BOARD

But isnt that fiber rollout the "problem".  When carriers think about this, they think about their own deployment.  But a major city (let's say NY) has to allow for the 4 major carriers to do fiber buildouts and be able to share space for their small cells.  Otherwise you have Verizon in New York, AT&T in Los Angeles, Sprint in Chicago and T-Mobile in Houston (THESE ARE EXAMPLES PEOPLE) with exclusive 5G coverage?

Joe Stanganelli 1/26/2018 | 12:18:15 AM
Re: Compromise @Clifton: I imagine that digging even in places other than California and stereotypical earthquake hubs may effect these seismological factors in the long run. I saw a news report just recently, for instance, about how the recent earthquake in Kodiak, Alaska, correlated with a water-level rise in Florida. I wonder how closely these projects are being watched and what impact, if any, thus far has been noticed/observed.
Reply | Post Message | MESSAGES LIST | START A BOARD

Joe Stanganelli 1/26/2018 | 12:15:07 AM
Re: Pole Congestion is a big barrier to entry - Incumbents know it too. @Alison: Indeed. Thus the reason for "Smart Cities" partnerships and major fiber rollouts by the big telcos -- such as the six-year plan that Verizon presently has going on in Boston. (See, e.g., my coverage here for Light Reading sister site Telco Transformation: (link).)
Reply | Post Message | MESSAGES LIST | START A BOARD

At the same time, there is a reason that the telcos are going so gung-ho into 5G -- and it's not just that they are buying into their own hype. There is only so much spectrum in the world. It is a limited resource, and higher bands of spectrum that are being released for 5G mean denser infrastructure necessary for coverage so as to cover the limited distance of those higher bands...

...and the cable companies don't have spectrum.

But the telcos DO have fixed wireline. And they have been starting to get into the fiber market themselves.

So the 5G hype is not just hype; it's about winning the small battles with other telcos before winning the great war against the fixed-wireline cable companies.

I recently interviewed Wells Fargo analyst/managing director Jennifer Fritzsche for Light Reading's sister site, Telco Transformation, who pointed to some of these factors in highlighting that 5G is an arms race...but that it's an arms race about fiber, so as to first conquer the 5G realm and then be able to go after the cable companies full throttle. You can read Part 1 of that interview here: (link) and Part 2 of that interview here: (link).
Reply | Post Message | MESSAGES LIST | START A BOARD

gregw33 1/25/2018 | 9:59:44 AM
Re: Pole Congestion is a big barrier to entry - Incumbents know it too. It sure does.  Notice that industry narratives have fairly recently acknowledged the need for lots of fiber for 5G?
Reply | Post Message | MESSAGES LIST | START A BOARD

Clifton K Morris 1/24/2018 | 12:53:57 PM
Re: Compromise Oftentimes, these poles were installed 50+ years ago, installed and designed with a smaller purpose in mind. If Google, et al, want access to these poles, they should be prepared to share in the costs related to maintaining them and upkeep. I know of areas where CableTV repeaters and fiber itself was too heavy. Cable companies had to setup their own poles in utility easements that could be certified to support the load.

Everyone wants cheap internet but it seems no one wants to share in the costs. The unions also take in some of the responsibilities in providing the labor and certified linemen to do the work. Using non-union labor may actually be costing Google a pretty penny in this situation, but its creating billable hours for the lawyers and attorneys. Maybe a few lawyers will be able to buy a new Mercedes before the first google lineman is certified!

Things are even worse in the Los Angeles area where digging trenches can affect fault lines. Because of code approvals, and civil engineering work, there are no other options but to attach to poles; some of which are integrated into the sidewalk.
Reply | Post Message | MESSAGES LIST | START A BOARD

gregw33 1/24/2018 | 8:28:57 AM
Pole Congestion is a big barrier to entry - Incumbents know it too. Incumbents are smart.   They know that their biggest threat is a fiber over-builder so they are doing everything they can to prevent one.  The pole congestion and subsequent make-ready costs and delays are a barrier to entry.

If the incumbents caved on this is, it's so they can deploy small cells quicker and cheaper.

I hope they are smart enough to see that their FCC/Pai wins are hammering their already disliked brands.