NEW ORLEANS -- SCTE/ISBE Cable-Tec Expo -- Charter Communications is sizing up the CBRS band for several use cases, one of which is using that spectrum to deliver a "triple play" bundle of data, voice and video services at the edges of its wired HFC networks, Craig Cowden, Charter's SVP of wireless technology, said here today.

Cowden, a keynoter at a Light Reading-hosted session dedicated to cable's mobile and wireless ambitions, offered updates on Charter's interests and intentions involving CBRS and the MSO's ongoing trial activity for both fixed and mobile use cases.

From a general standpoint, CBRS will help Charter "extend beyond the reach of HFC," he said. "It's not an overlay of HFC." 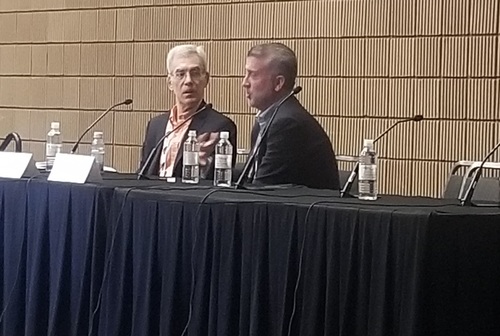 "The fixed wireless use case is more unfettered" and represents the biggest near-term opportunity for Charter with the 3.5GHz CBRS band, Cowden said, referring to a swath of midband spectrum that will support both licensed and unlicensed services alongside incumbent users such as the US Navy.

Charter also sees a CBRS-powered fixed wireless network as an opportunity for the MSO to "extend our HFC plant and offer broadband services in more rural territories," he said. Cowden added that the goal, from a high-speed Internet standpoint, is to deliver minimum speeds of 25 Mbit/s downstream and 3 Mbit/s upstream "at the cell edge" and, therefore, match up with the FCC's current definition of broadband.

Charter is presently testing a CBRS-based fixed wireless service with non-paying customers in a rural part of North Carolina. Based on the results of those trials, which are looking into technical performance as well as the operational processes involved, Charter could move toward commercial deployments sometime next year.

Mobility moves
In a second phase of its CBRS-facing activity, Charter is also testing mobility in parts of New York and Los Angeles using dual-SIM smartphones that can seamlessly be handed off between the macro cellular network and CBRS-powered small cells.

Charter is doing "extensive testing" in this area, but it does not yet represent a "real commitment to deploy," Cowden stressed, noting that further commitments will hinge on how the broader CBRS technology ecosystem expands and evolves.

For that mobility trial, which has a CBRS data offloading component, Charter is using connected management software in the phone that manages that network switching and builds upon a similar approach it is taking today with Spectrum Mobile, a service that relies on Charter's WiFi infrastructure and its MVNO agreement with Verizon Wireless. Spectrum Mobile, which launched last year, is already a "WiFi-first MVNO" that employs the MSO's connected management software, Cowden said.

Cowden said Charter is also interested in using CBRS to underpin private LTE networks it could use in its growing enterprise business, viewing it as a "real door-opener" for new business applications and services.

In an earlier session here, Dave Wright, president of the CBRS Alliance, acknowledged that the enterprise service opportunity for CBRS among cable operators is a big one. Using the unlicensed piece of CBRS, he said, will enable MSOs to deploy those services "without having to jump through any hoops to speak of."

Wright said the CBRS Alliance now stands at 149 members, and had 45 devices on display, including smartphones, IoT modules, gateways, laptop modules and security cameras, at the organization's recent launch event in Washington, DC.