Taking another step toward the cloudification of the access network, Vecima Networks announced Tuesday it has successfully tested a cloud-based distributed access architecture (DAA) controller running on AWS.

That work, characterized as a proof-of-concept trial, centered on the deployment of Vecima's Entra Access Controller (EAC) deployed on the Amazon Elastic Compute Cloud (EC2).

It was conducted with Bluepeak, a rural cable operator formerly known as Vast Broadband that serves customers in parts of South Dakota, Minnesota, Oklahoma and Wyoming. The test itself used the AWS cloud in Ohio to control a Bluepeak remote MACPHY node situated about 1,000 miles away. 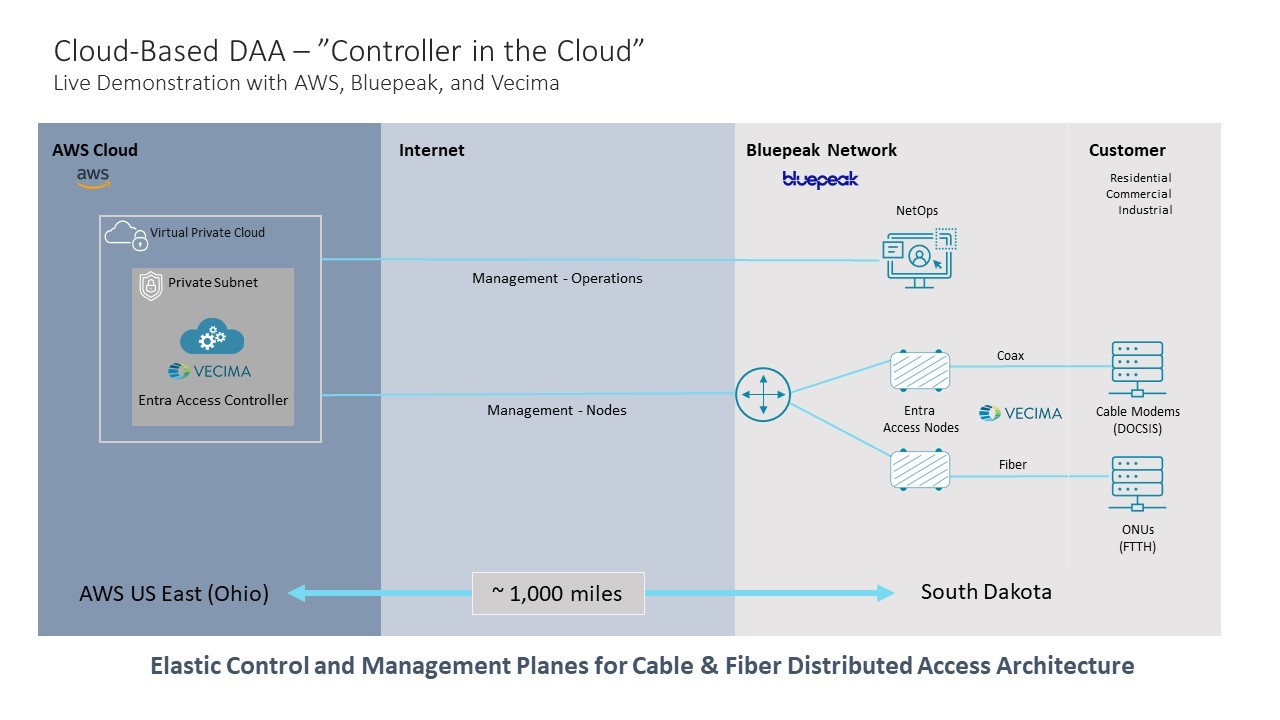 Click here for a larger version of this image.
(Source: Vecima Networks)

The controller in a DAA deployment focuses on the management plane. In that role, it aggregates the control and management of a multitude of remote MACPHY nodes or remote MACPHY devices (RMDs) that are deployed toward the edges of the network, that are distributing both the access network's PHY layer and MAC (media access control) processing.

The controller doesn't handle massive data loads, but instead focuses on lightweight functions such as configuring and provisioning nodes and reporting back statistical data.

The RMDs on the access network, rather than the controller tucked into the AWS cloud, would continue to handle high-bandwidth, low-latency services and applications, Colin Howlett, Vecima's chief technology officer, explained.

Clay McCreery, Vecima's chief operating officer, believes the notion of deploying the DAA controller in the cloud could be especially appealing to small and midsized operators. And specifically with operators that are interested in shifting to cloud native and distributed architectures that don't already operate national, private clouds (like some larger operators do) or want to cost out a way to lease capacity so that a sector hub can support a fragmented array of smaller systems.

"In that world, this becomes pretty interesting because AWS can be that centralized control for all of your systems nationwide," McCreery said. "We're just proving that you can control a node from thousands of miles away  As long as you can route fiber from the node to the IP network and you have IP connectivity to your data center or to the cloud, we can control a MACPHY node."

The test with Bluepeak is a start, as Vecima now intends to engage with other operators to see if it's a path they might consider for DAA.

McCreery said Vecima's implementation with AWS would work on hybrid fiber/coax (HFC) networks as well as fiber-to-the-premises (FTTP) networks, since it's using the exact same software. It will work the same on a MACPHY node as it would on Vecima's 10-Gig EPON node, he added.

That could become increasingly important as cable operators around the nation continue to deploy FTTP in targeted scenarios, such as greenfield builds, for HFC upgrades in select areas, and for fiber builds in underserved or unserved areas that are being funded with help from federal or local subsidy programs.

McCreery suggests that cable operators with Rural Digital Opportunity Fund (RDOF) commitments could find this approach helpful when faced with the operational challenge of building fiber access networks to multiple neighborhoods or municipal areas that aren't physically connected to each other.

Vecima and AWS envision that multiple AWS services, including data lakes and data and analytics, or support for converged fixed and wireless networks and services could also be tied into this architecture.

And while this initial proof-of-concept is with AWS, Vecima could stitch its controller into other public cloud providers, McCreery noted.

Vecima isn't the only cable access supplier focused on how public clouds might play an important role in certain scenarios, including rural deployments.

Last fall, Harmonic announced it had integrated CableOS, its virtualized cable modem termination system (CMTS), with the Google Cloud Marketplace. Under that approach, Harmonic said it envisions a cable operator being able to run instances of a virtual CMTS in the cloud rather than running it at an operator's localized facility.