Rakuten Mobile's Tareq Amin has always been refreshingly transparent about vendor selection. The companies that pass through the revolving doors of Japan's youngest mobile network have not been able to escape wider attention, whether entering or leaving the premises.

Nokia and KMW were prominent suppliers of 4G radio units, but Rakuten preferred Airspan and NEC on 5G. Local boy NEC is also muscling out Cisco as Rakuten shifts its packet core from 4G only to both 4G and 5G. Now another upheaval is underway that will cost IBM's Red Hat its role.

With the help of both Cisco and Red Hat, Rakuten had originally built its private cloud based on OpenStack, an open source platform the public clouds and younger software technologies seem to be leaving behind.

Promoted from chief technology officer to CEO this year, Amin plans to junk OpenStack like an old pair of running shoes and stand Rakuten on a platform with more bounce.

The transition follows his purchase of Robin.io, a Silicon Valley-based cloud startup, in late February. That takeover has given Rakuten an alternative to the OpenStack system with huge apparent benefits.

"The cost that Robin.io will run at will be 50% less than what I have today," Amin told Light Reading, confirming "100%" that Red Hat's OpenStack platform is to be phased out entirely. 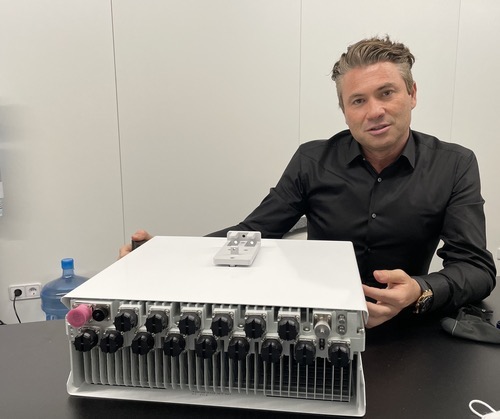 Cost benefits appear to come largely from ditching the virtual machines used with OpenStack and relying instead on more cloud-native technologies such as containers and microservices. Essentially, these are more granular software blocks that can be combined with greater freedom to create new features.

For anyone outside the software community, it is like the difference between a child's one-piece toy castle and a Lego fortress that can be taken apart and rebuilt in new and imaginative ways.

"Deploying a single telco application, no matter how good you are, whether you are a public or private cloud, is a process that takes almost nine months on any cloud and that is largely because of the complexity or a lack of tooling that exists in the current architecture," Amin told analysts and reporters on a recent call.

"In 5G, we decided to evolve and move to our own platform called Symcloud through the Robin.io acquisition and we've seen unbelievable benefits."

The process of shifting 4G workloads to Symcloud has already started and Amin expects to complete that by March next year.

"One hundred percent of every workload will be CNS [cloud-native storage], completely microservices-architected, completely orchestrated by Rakuten Symphony's own orchestrator and running on a 100% indigenously developed cloud environment," he said.

As with other technologies it has "proven" on its Japanese network, Robin.io's products are now being marketed to other service providers as part of Symphony, essentially the vendor part of Rakuten. Given the savings Amin believes Rakuten can realize in Japan, the pitch is obvious.

"From Symphony's point of view, the go-to-market strategy is to offer any customer 50% less than what they pay today," Amin told Light Reading.

Symphony faces competition from the "hyperscale" giants of AWS, Google Cloud and Microsoft Azure, all of which are trying to persuade telcos of the public cloud's attractions for hosting workloads.

In the US, Dish has agreed to run almost its entire network on AWS, while AT&T has struck a deal with Microsoft Azure for the hosting of its 5G core. In Europe, however, both BT and Vodafone have voiced reservations about entrusting their core networks to public cloud providers.

"The industry is still discovering its comfort zone," said Amin.

"What is the comfort zone for public versus private? That demarcation is still not very clear."

Most of Symphony's products, however, can be deployed in any cloud environment, and a site manager tool it has sold to AT&T already runs in the Microsoft Azure cloud, according to Amin.

An exception appears to be Rakuten's Altiostar radio access network software. In the short term, Rakuten wants to keep that on its own cloud.

"The complexity of running radio on a distributed unit needs quite a bit of integration," said Amin.

The opportunity for Robin.io is based largely on a view that operators will need a "hybrid" cloud approach, meaning they can make use of both public and private clouds, depending on the circumstances.

"What is critical is having the right orchestration platform that allows you to deploy the workloads in a hybrid cloud environment," said Amin.

As operators and other companies fret about over-reliance on a few giant vendors, and the growing might of Big Tech, that argument may sound persuasive.