Satya Nadella would probably put it differently in public, but COVID-19 has been one of the best things that could have happened to Microsoft, the tech giant he has managed for the last eight years.

Since March 2020, when the virus was stretching its legs prior to its first global sprint, about $1.1 trillion has been added to Microsoft's stock-market value. When markets closed on January 25, the Seattle-based software giant was worth almost $2.2 trillion. Only Apple is bigger.

The accepted narrative is that lockdowns and other restrictions have turned even the most curmudgeonly of technophobes into committed netizens. Arguably, those lockdowns would never even have happened if the Internet did not exist.

Governments realized their economies would survive restrictions  when they would previously have collapsed  thanks to modern-day tech. Ecommerce, the cloud and Zoom have been thrown into play as shopping malls, on-premises IT support and office parties are benched (unless you work in Downing Street, that is).

As a prominent member of the US's Big Tech collective, Microsoft has been one of the main beneficiaries of this two-year tech-gasm.

And the latest numbers prove it. For the company's second quarter, which ended in December, sales were up a fifth year-on-year, to a neck-craning $51.7 billion, and net income by the same fraction, to about $18.8 billion.

Big Tech before and during the pandemic 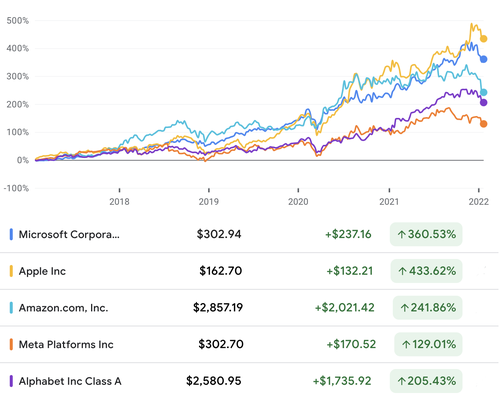 "Digital technology is the most malleable resource at the world's disposal to overcome constraints and reimagine everyday work and life," said Nadella in his official statement about results.

Quite. If this story were an airport thriller, or history penned by a conspiracy nut, Nadella would be cackling in his virus development lab as he wrote those words, or stroking a white cat as he plotted the world's next pandemic.

And yet investors are relatively gloomy. Microsoft's share price is down 16% since early December. It dropped 5% in after-hours trading on January 26 before rallying on Nadella's optimistic forecast  which included a prediction that sales will grow by 16% to 18% this quarter. It was up 5% at the time of writing today, but remains well below that December peak.

What's going on? The fear seems to be that Microsoft's fortunes now have an inverse relationship to the health of the world's population.

If the pandemic made Big Tech even bigger, a recovery might diminish it as individuals ditch the Xbox and brave the outdoors. Signs the latest Omicron variant of COVID-19 is either in retreat or not as nasty as its predecessors  coupled with pandemic fatigue and no small desire for a return to normality  seem like bad news for Big Tech.

But Microsoft can probably rest easy. The worst-case scenario for Nadella is that an end to the pandemic slows his firm down a bit.

No company that has plunged into the public cloud and sold off its IT servers is about to have a rethink, virus or not. Few teenagers who spent their formative years on Call of Duty will abandon games for mountain biking just because authorities in the most restrictive countries have told them it is safe to go outside. Enough of the "new normal" will remain.

And besides, Big Tech was not exactly small tech before COVID-19 arrived. In the two years before it showed up, Microsoft's market capitalization rose about $400 billion to exceed the $1 trillion threshold.

All the pandemic has done is turbocharge its growth and the developments underpinning that growth. Remote working, the cloud (which now accounts for nearly 43% of Microsoft's revenues) and even the metaverse would all be happening anyway.

Still, there is nerviness within the analyst community about the end of the pandemic and what that could mean for Big Tech.

"Internet mega-caps have had a rough start to 2022," notes Rohit Kulkarni of MKM Partners. Amazon's shares are down 16%, while Google has dropped 12%, Facebook 11% and Microsoft 14%, he says in research published today.

"If ecommerce and advertising shift accelerated by three to four years over the past 18 months, what happens if this secular shift slows down?"

The answer is clearly not the demise or even marked diminishment of Big Tech. No, only a toughening-up of regulation, the emergence of new rivals or some combination of the two would be a serious threat.

But regulators may have left intervention too late if they are to limit Big Tech's power without hurting a world economy that relies on it.

New rivals, moreover, are usually snapped up in takeover deals before they can become dangerous.

While Facebook's $19 billion purchase of WhatsApp in 2014 is the best historical example, the big five (Amazon, Apple, Facebook, Google and Microsoft) have together bought more than 110 companies in the last three years, according to research carried out by the Economist.

In a more competitive market, some might have become household names in their own right.

There will, no doubt, be some hope the metaverse  as a new new thing  provides an opportunity for disruption. And in his public pronouncements, Nadella imagines it as a kind of vibrant and diverse community.

"Just like the first wave of the Internet allowed everybody to build a website, I think the next wave of the Internet will be a more open world where people can build their own metaverse worlds, whether they're organizations or games developers or anyone else," he said on yesterday's earnings call.

It's a neat comparison with the early years of the Internet, when Google was not a verb and Microsoft was barely involved.

But the Internet economy  far from being equitable  has concentrated wealth and power in a cabal of American firms to an unprecedented degree. Nadella just decided not to mention that part.