Taiwan's MediaTek recently passed San Diego-based Qualcomm as the world's largest supplier of chips for smartphones. According to analysts, the development is partly due to the US government's actions against China's Huawei.

"After the US government's ban on Huawei, Huawei started to use MediaTek chips," wrote research and consulting firm Omdia in a recent report. The firm is owned by the same parent company, Informa, as Light Reading. "As a result of leading brands utilizing MediaTek technology, other brands also followed, diversifying their respective supply chain. The US technology ban highlighted the need to consider potential political impacts on established supplier relationships."

"MediaTek was also able to leverage the gap created due to the US ban on Huawei. Affordable MediaTek chips fabricated by TSMC became the first option for many OEMs to quickly fill the gap left by Huawei's absence. Huawei had also previously purchased a significant amount of chipsets ahead of the ban," wrote Counterpoint Research Director Dale Gai in a report late last year.

MediaTek commanded 27% of the smartphone chipset market in 2020, according to Omdia, just ahead of Qualcomm's 25%. However, Qualcomm still leads in the growing 5G sector, according to Counterpoint. The firm reported Qualcomm powered 39% of the 5G phones sold worldwide in the third quarter of 2020. 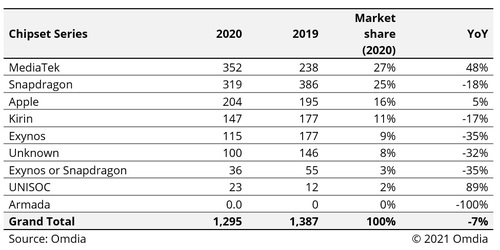 According to Omdia's latest Smartphone Model Market Tracker that tracks chipset shipments by the millions, MediaTek led the market in 2020. Click here for a larger version of this image.
(Source: Omdia)

To be clear, analysts attributed MediaTek's rise to a number of factors, such as Xiaomi's growth in the market and MediaTek's gains at Samsung. However, the findings help to yet again highlight the wide-ranging ramifications of the US government's ban against China's Huawei.

The ban is explicitly intended to help protect Americans from Chinese espionage through Huawei equipment, but in the wider economic context it's also become a leverage point in overall geopolitical positioning between what are becoming the world's two great economic superpowers. Former President Trump championed the Huawei ban amid a trade war with China, and President Biden has so far largely adhered to that trajectory.

This is not the first time Qualcomm's corporate fortunes have been buffeted by the geopolitical climate. The company's proposed acquisition of NXP ultimately collapsed due to opposition from Chinese regulators, while Broadcom's hostile takeover of Qualcomm was halted by American officials. Amid these machinations, Qualcomm itself has worked diligently to retain its business selling its chipsets to Chinese customers.

But Qualcomm isn't burying its head in the sand. US-China relations is one of many risks listed by the company in its financial filings. "A significant portion of our business is concentrated in China, and the risks of such concentration are exacerbated by US/China trade and national security tensions," the company notes.

NEW Infographic! Get the key service provider findings from our 2H 2020 Threat Report
Whitepaper: Learn how to detect and intelligently orchestrate mitigations for all types of DDoS attacks!
Watch the video: Challenges to Defending Against DDoS Attacks in the Age of Digital Transformation
Find out why over 90% of ISPs trust NETSCOUT with their Smart Security in this solution brief