Ciena's Jamie Jefferies could not have picked a more interesting time to move back to the UK.

After an eight-year sales stint for the optical equipment maker in New York, the British executive returned home in October 2018 to run Ciena's EMEA business. Two months later, a US campaign against Huawei went into overdrive with the arrest of Meng Wanzhou, the Chinese vendor's chief financial officer, in Canada. Since then, the normally staid telecom industry has been rocked by geopolitics as Europe stumbles into 5G. Throw in a seemingly interminable health crisis and there is no shortage of excitement.

Huawei's battle to avoid exclusion from Europe's 5G sector might seem to have little significance for Ciena. Headquartered in Maryland, and nearly 30 years old, the company is best known as a provider of the optical equipment used in transport networks  the big fixed pipes that connect data facilities and central offices. It has no direct involvement in the radio access network (RAN) that now consumes so much political attention. 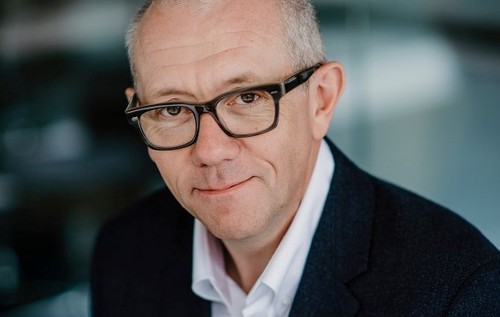 Ciena's Jamie Jefferies is ready to capitalize on Huawei's problems.

But the Chinese firm's problems are a clear opportunity for Ciena, according to Jefferies. "There are already things baked into our plan based on Huawei being less relevant," he tells Light Reading. "It is not just about the RAN. It is fronthaul and backhaul and the intelligent systems and core. That absolutely makes us think about where those opportunities are and how we are going to service them."

Huawei has already lost several big European RAN and mobile core network contracts as governments have imposed restrictions and operators have responded. So far, there has been little public sign of pressure on its other network activities. But if Jefferies is right, then Ciena would certainly be near the front of the substitutes queue.

Analysts remain bullish about the company and its line-up of products. "We continue to see Ciena's revenue and operating model tracking ahead of investor expectations," said Fahad Najam, an analyst at MKM Partners, in a December research note. Despite the pandemic, sales were down just 1.1% in Ciena's last fiscal year, to about $3.53 billion, and net profit soared 43%, to $361,291. At about $56.26, Ciena's share price has gained 30% in the last year, and it has trebled in the last five.

Contrast that with the performance of Nokia, Ciena's biggest non-Chinese optical rival, down a third since 2016, when it entered the optical market through its 15.6 billion ($18.9 billion, at today's exchange rate) takeover of Alcatel-Lucent. A restructuring under new CEO Pekka Lundmark, desperate to restore Nokia's mobile business to full health after some costly mistakes by his predecessors, could be a distraction from other business activities that ultimately benefits Ciena.

Huawei and Nokia are not the only optical rivals in town, though. Asked to assess the competitive landscape in EMEA today, Jefferies also names California's Infinera, Germany's ADVA and Ribbon Communications, following its takeover last year of ECI Telecom, as challengers. Yet none of these companies can measure up to Ciena financially.

"I have the opinion that some of the smaller guys are going to struggle to keep up with the R&D," says Jefferies. "It costs a lot of money to drive the innovation to get to that 800G." 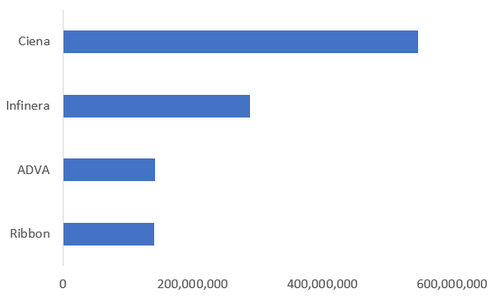 The 800G is a reference to the latest and greatest in the industry's range of optical networking products, and Jefferies already lays claim to 65 deployments internationally, namechecking Tier 1 operators including Verizon, Deutsche Telekom and Telia as Ciena customers. "We do think we have a pretty significant lead there in terms of products that are generally available," he says. "Other people are still in field trials and just testing the technology."

Regardless of the bold pitch, there is clearly a big R&D gap between Ciena and its smaller rivals. Last year, it spent $529.9 million in this area, about 15% of its entire sales. Yet to publish full-year results, Infinera managed $201 million for the first nine months, while Ribbon stumped up $143 million. ADVA, with nine-month sales of about 424 million ($513 million), spent only 88 million ($107 million), according to its last earnings report. "It will be a struggle for smaller guys to keep up with us," insists Jefferies.

Ultra NOCs are the new wave

But even if Ciena has coped with the pandemic better than most firms, its revenues have still declined. Some customers have slashed budgets or deferred spending on non-mission-critical activities, according to Jefferies. In other cases, there has been a shift in spending. As lockdowns have transformed people's homes into makeshift schools and offices, network traffic has spiked in residential communities while collapsing in city centers and business parks. "We are seeing a lot of activity in the metro and access arena," says Jefferies.

Another bright spot in the EMEA region is Blue Planet, Ciena's suite of automation software, as efficiency rockets up the service provider agenda. "Customers are starting to accelerate trends that we thought would be two or three years out, things like automation of the network," says Jefferies. Attempts to "virtualize" the network operations center (NOC) would have been dismissed as madness a few years ago, he says. Now they look normal.

Aside from the pandemic, the other analyst concern about Ciena is the company's dependence on a relatively small number of big players. Last year, about 55% of revenues came from just ten customers, and more than a third was generated by AT&T, Verizon and an unidentified web-scale firm. The loss of any, as Ciena points out in financial documents, "could have a material adverse effect."

A possible defector could be Amazon, which is estimated by MKM Partners to account for between 5% and 8% of Ciena's revenues. MKM's Najam believes the Internet giant is working on its own optical "white box" technology and will eventually use this in preference to Ciena's products. "Our proprietary checks indicate that Amazon is internally developing a 600G-capable DCI [data center interconnect] routing solution that directly incorporates both IP routing and optical transport functions in one single platform," said Najam in his December research note.

Jefferies acknowledges the risk but shrugs it off. Web-scale investments in the EMEA region are already translating into sales opportunities with those firms as well as the service providers connecting to their data centers, he points out. "They are driving a lot of opportunities in both direct and wholesale markets."

Like many other companies right now, Ciena declined to provide short-term guidance during its last earnings update in December, citing "uncertainty stemming from the pandemic." The mission, said CEO Gary Smith, would be to continue "growing faster than the market." If rivals are as hamstrung as Jefferies makes out, anything less would be a disappointment.

UPDATE: The figures for ADVA's R&D costs have been increased in the chart and text since this story was first published after the company pointed out to us that some of its R&D spending is capitalized under accounting rules.