Despite Verizon's stumble out of the gate with its initial iteration of 5G Home, the threat posed by fixed wireless broadband is at risk of being underestimated by US cable operators, a top industry analyst warns.

Fixed wireless broadband (FWBB) represents the "most important threat" to cable broadband service providers, perhaps outpacing the impact of a slowdown of new household formation, which currently accounts for about half of industry growth, Craig Moffett, analyst with MoffettNathanson, found in a new report.

Moffett's latest report on US broadband took another quarterly view of overall growth rates and drivers while also taking at deeper dive into FWBB upstarts such as Vivint Internet and Common Networks. In addition, he explored the competitive potential posed by new low-earth orbit (LEO) satellite broadband options underway at SpaceX (Starlink) and Amazon (Project Kuiper).

"We highlight these competitive threats not to suggest that Cable's long run as a protected and advantaged infrastructure is facing imminent threat, but instead to warn against creeping complacency," Moffett wrote. "Over the next year, we expect that conversation about broadband alternatives will intensify."

FWBB competition is worth watching
Among those in the FWBB group, Vivint Internet (a spinoff from Vivint Smart Home) and Common Networks are using mesh architectures and other techniques designed to compensate for the shortcomings of millimeter wave spectrum, which delivers plenty of data but only over very short distances.

In the case of Vivint, it is pursuing networks that utilize highband frequencies (including the 70GHz/80GHz E-Band and the 60GHz V-Band) along with the 3.5GHz CBRS band, a midband option that will give Vivint the ability to pursue a blend of licensed and unlicensed spectrum that can support much wider areas of coverage, Moffett notes. Common Networks, meanwhile, has been leasing existing dark fiber and riding unlicensed 60MHz spectrum using Facebook's Terragraph tech.

"In many ways, their [fixed wireless] architectures appear more promising than Verizon's," Moffett wrote of Vivint and Common Networks. "They don't pose an imminent threat to numbers today. Still, they are very much worth watching  [T]he mere expectation of new competition will start to matter long before they actually have an impact on observed results."

He also believes the second generation of Verizon's 5G Home service, which will utilize 5G NR equipment and a full 800MHz-wide block of spectrum (versus a first-gen product that used a 400MHz-wide block), "will unquestionably work better than the first."

Reports about Verizon's second-gen demos in Miami during Super Bowl LIV appear to obviate some of the propagation and penetration issues that were evident with the initial rollout of 5G Home, explained Moffett. "But, we're still skeptical that Verizon's fixed wireless broadband will have much market impact  the physics of millimeter wave are still the physics, making broad deployment exceedingly expensive  but it would be a mistake to assume Verizon will have no impact at all," he added.

However, when everything is factored in  from Verizon's next-gen platform to novel network approaches from wireless broadband upstarts like Vivint, Common Networks and even Boston-based Starry  "we can't help but wonder whether the market is now too complacent about fixed wireless broadband," Moffett stressed.

And those new services will be taking aim at a US broadband sector that is showing signs of slowing down or at least flattening out. For the fourth quarter of 2019, overall growth declined slightly, to 2.7%, from 2.8% in the year-ago quarter, according to MoffettNathanson's latest analysis. And the overall market is saturating, as US broadband penetration now stands at about 81.8% of occupied households, Moffett points out. 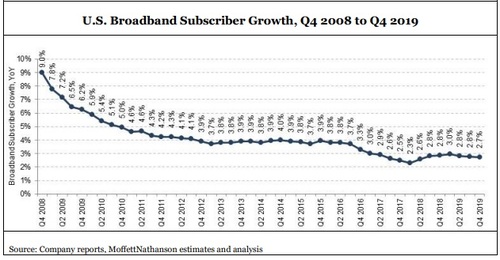 US cable, meanwhile, continues to dominate and expand its lead on domestic telcos  cable broadband growth was 5% in Q4 2019 compared to -1.9% for the telcos.

Eyes on the skies
Moffett said SpaceX's Starlink and Amazon's Project Kuiper are also worth watching as potentially viable broadband competition, despite lingering questions about how those services will be priced and brought to market.

"Unlike satellite broadband of the past, LEO constellations at least have a chance of working outside of rural niches. Like mesh-based FWBB, they, too, demand attention," the analyst explained.

Because LEO satellites are closer to the earth's surface, they will solve the latency issues that saddle broadband services delivered via Geosynchronous Earth Orbit (GEO) satellites. Rather than latencies in the neighborhood of 600 milliseconds, as is the case for GEO satellites that orbit some 22,000 miles above the earth's surface, LEO platforms, such as what's being devised by SpaceX, are targeting latencies in the range of 25 to 50 milliseconds, putting them on a par with many terrestrial broadband services.

But LEO-powered services require large constellations of satellites (in the thousands). They are also underpinned by a more complicated infrastructure that requires frequent service handoffs as satellites move overhead.

And there are lots of uncertainties surrounding Starlink and whether it can execute its plans as it prepares to start service sometime this summer. While cost assumptions for Starlink (at least $10 billion) might already be too optimistic, there are also big questions about its go-to-market strategy.

At an even earlier stage is Amazon's Project Kuiper, which is shooting for a constellation of about 3,236 LEOs connected to 12 AWS ground facilities, and has yet to acquire FCC approval. "There is currently no information regarding deployment timeline or availability," Moffett noted.

CableLabs has also been keeping a close eye on this emerging category of broadband competition, concluding that the momentum building behind LEO-based technologies indicate that it's no longer a "pipe dream," but represents a potential, true competitor to cable broadband. 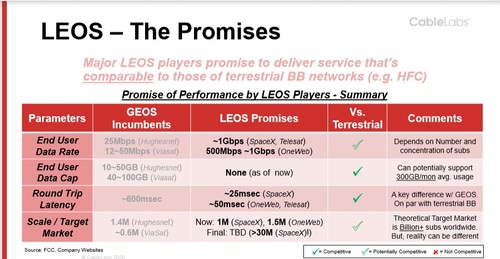 "2020 is a big year for LEOs and particularly SpaceX," said Shahed Mazumder, principal strategist at CableLabs, which has been conducting a competitive scan of the satellite broadband market and presented some of its findings at the recent NCTC Winter Educational Conference in Las Vegas.

Broadband service plans centered on LEO technologies could deliver comparable performance (both in terms of speed and, to a large degree, latency), to some terrestrial broadband networks, Mazumder said.

"They also have a huge market to go after," he added, noting that they could likewise pursue both residential and commercial/enterprise customers.

But the business models of new entrants, Mazumder points out, will be challenged by steep customer premises equipment (CPE) costs, which will require smart, expensive and complex antennas capable of tracking a multitude of satellites and ensuring that the user is being linked to the right one.