Rakuten: Our spectrum's the problem, not our network

Japan's Rakuten has lashed out at recent analyst conjecture that its network performance has deteriorated as customers have joined the service. The criticism evidently stung Tareq Amin, the chief technology officer of Rakuten Mobile, by calling into question his choice of new cloud and software technologies such as open RAN (O-RAN). Any problems have nothing to do with his network, he told reporters and analysts earlier today. Rakuten's meager allocation of 4G spectrum is the culprit.

On paper, Rakuten holds just 20MHz of 4G frequencies in the 1.7GHz band, giving it only about a fifth of the spectrum held by each of its rivals. Worse still, some 15MHz of this allocation is largely unavailable across vast swathes of the country, it emerged today. 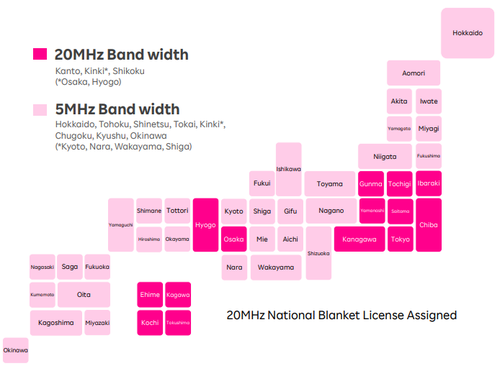 "When we were awarded the spectrum assets in Japan, the current 1.7GHz that we are on was actually spectrum the Ministry of Defense was utilizing for communications between earth stations across many prefectures in Japan," said Amin. "When we obtained the spectrum not all of the areas and the regional cities had been cleared to allow us to use the full bandwidth of 20MHz."

Amin says his team has been working with a "supportive" government to relocate the military in entirely different spectrum and free up the 1.7GHz band. "We are making great progress and by the end of the year we will be fully on a 20MHz channel," he said.

You bring me down

The latest Zoom-enabled "roundtable" with Rakuten Mobile's chief technology officer took place after the operator's launch of new pricing plans designed to spur consumer interest in its 4G and 5G services. Roughly nine months after its mobile launch, it has managed to attract some 2.2 million subscribers, a figure that analyst firm MoffettNathanson described as "disappointing" given Rakuten's extremely competitive prices.

MoffettNathanson seems to have picked up on research carried out by OpenSignal, which showed that download speeds on Rakuten's network had fallen between May and September last year, even as they held steady on rival infrastructure at nearly 47 Mbit/s. Rakuten's average download speed was about 24.8 Mbit/s in May. By September, it had fallen to 21.6 Mbit/s, according to OpenSignal's tests.

Clearly upset about the recent coverage, Amin said he wants OpenSignal to distinguish in its reports between the 20MHz and the 5MHz areas. "Open RAN doesn't mean we have an average network," he said. "We have a world-class network."

Rakuten and Amin have emerged as the loudest cheerleaders for O-RAN, which promises an alternative to the customized and integrated systems that operators currently buy from Ericsson, Huawei and Nokia, the dominant mobile infrastructure vendors.

Using new O-RAN interfaces and software tools, operators would be able to select products from different suppliers for rollout at the same mobile site  something not possible today. O-RAN software could also be deployed on general-purpose equipment developed by new hardware companies.

But critics including Ericsson insist the technology does not measure up performance-wise and is suitable for deployment only in rural and less demanding conditions. "The discussion on that architecture and when it will be truly competitive is a bit hard to address right now but we don't see it really being ready for prime time except for low-performance applications or segments," Börje Ekholm, Ericsson's CEO, said on a call with analysts today.

Major service providers appear to agree with Ekholm's assessment, despite recent commitments they have made to O-RAN technology. Arnaud Vamparys, the senior vice president of radio networks at France's Orange, recently told Light Reading he does not expect O-RAN to reach "parity" with traditional equipment until 2025.

Amin has routinely been dismissive of the naysayers, blaming telco workforce culture and resistance to change for much of the negativity about O-RAN. "Don't let anyone tell you open RAN doesn't work for massive MIMO," he said today, in reference to one of the more advanced 5G technologies. "It works very well."

Of course, blaming performance degradation on spectrum shortcomings does not prove O-RAN measures up. The evidence may come only when Rakuten can offer a like-for-like comparison with other networks, providing services in a particular zone to a similar number of users over the same quantity of spectrum. When it comes to 5G, Rakuten is no worse off than KDDI or SoftBank  holding 500MHz across mid-band and millimeter wave ranges  and so there can be no spectrum excuses if the service disappoints.