The fist-bump has become the COVID-safe, socially responsible alternative to the handshake.

But it loses its symbolism when one of the fists looks as bloodstained as that of Mohammed bin Salman, the Saudi crown prince believed by US intelligence to have ordered the murder and dismemberment of Jamal Khashoggi, a columnist for the Washington Post daringly critical of Saudi Arabia's rulers.

Biden was visiting Saudi Arabia last week mainly to negotiate oil production following Russia's invasion of Ukraine. But there was a curious telecom sidebar to the story.

Besides discussing energy, Biden claimed to have secured a commitment from Saudi Arabia to invest in US technologies for new 5G and future 6G networks. It is significant because Saudi Arabia, like most other countries, today faces a limited choice of suppliers led by Sweden's Ericsson, China's Huawei and Finland's Nokia.

"This new technology solution for 5G, called open RAN, will outcompete other platforms, including from China," said Biden.

But the statement is as controversial as the fist-bump that preceded it. Contrary to what Biden suggests, open RAN is not a US technology, merely a set of interfaces (developed with Chinese support) that might boost competition in the oligopolistic market for radio access network (RAN) products.

Today, operators mainly buy all the bits and pieces from one big vendor, which does the hard work of slotting them together before they reach the customer.

With open RAN, the bits and pieces could theoretically come from multiple suppliers, giving specialists an opportunity that did not previously exist. 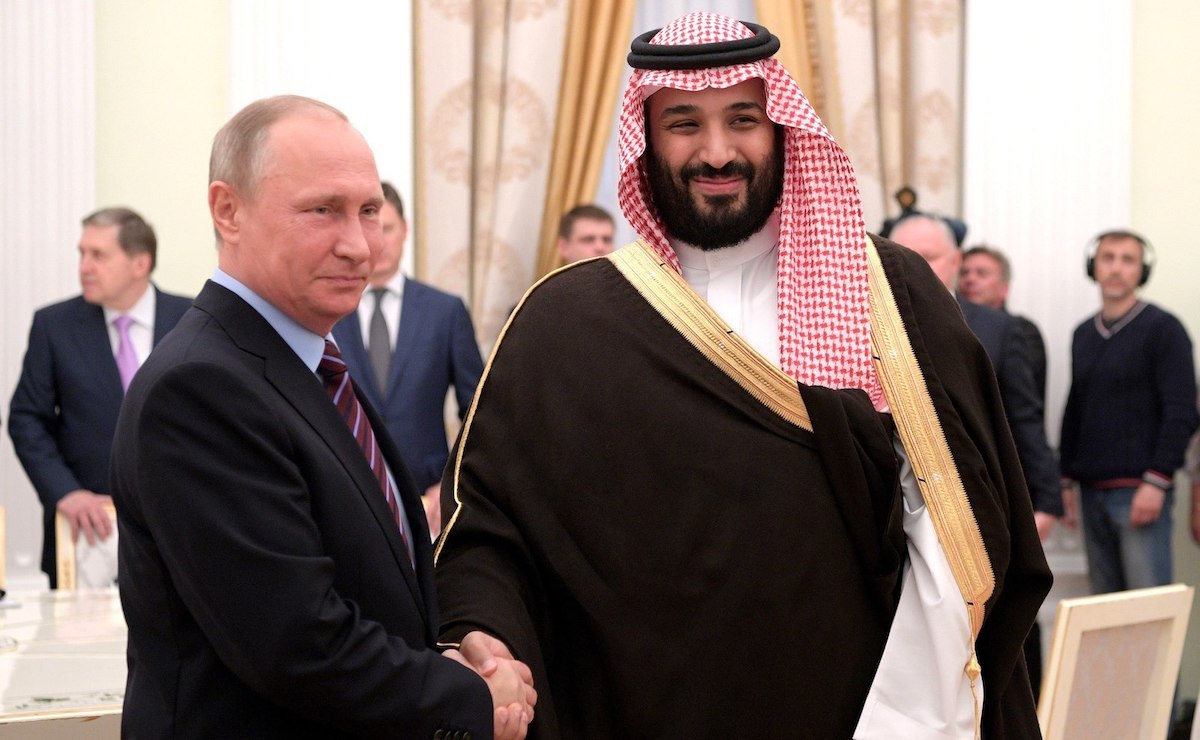 "So how do you dispose of the bodies?" Vlad the invader meets Mohammed the murderous.
(Source: The Kremlin via Creative Commons)

The idea appeals to Americans who worry their country has no Ericsson or Nokia of its own and had previously ceded 5G leadership to Huawei.

Yet open RAN has failed to produce an American equivalent so far, and it probably never will. One problem is a political misunderstanding: An open RAN-buoyed specialist, focused on one part of the RAN value chain, could never substitute for Ericsson, which does everything.

The US would only have an end-to-end alternative if there were specialists in every RAN field linking arms.

The US is awash with semiconductor companies, server makers and cloud platforms, all of which have a role to play in the RAN. But none of these companies owes its existence and fortunes to open RAN policy or dealmaking.

Worse, the US companies most closely associated with open RAN have struggled to make an impact on a 5G market now several years old.

The biggest loser is Parallel Wireless. A developer of baseband software, it was this month reported to have laid off up to 80% of a workforce comprising about 1,000 people.

Steve Papa, its co-founder and CEO, denies cuts were so extreme but would not provide his own figure during an email exchange with Light Reading. One of its mistakes, according to a source close to the company, was to prioritize 2G and 3G development over 5G.

"It would be nice if there were more greenfield 5G networks, wouldn't it, but that's not how telecom infrastructure works in a world of scarce spectrum and pre-existing phones," said Papa, who declined a phone interview to respond to recent criticisms of and commentary about his company.

True as that may be, a few greenfield networks have appeared, and Parallel Wireless shows up in none.

Papa lays some of the blame for recent cuts on current economic difficulties, arguing it is unreasonable to think company management "should be better than the Fed at forecasting the capital markets and macro environment of inflation."

But he also thinks open RAN is facing considerable headwinds. And responsibility for that lies partly with US policymakers, he says.

A policy that started under Barack Obama, gained momentum under Donald Trump and has been maintained in the Biden era is to restrict the activities of Chinese technology companies, and chiefly Huawei, in the Western world.

These restrictions have included formal bans on the use of Huawei in several countries, as well as cutting it off from semiconductor technology that features any US input.

Among some US hawks, the hope was that a clampdown would drive investment toward the alternative of open RAN. But the consequences have largely and inadvertently been negative, according to Papa.

For one thing, efforts to block Chinese radio development, he says, have led to "material delays" in open RAN progress.

"The entire investment in building [an] O-RAN end-to-end supply chain had to be repeated in the worst supply chain crisis of our generation."

It is a head-scratching assertion. There have been few overt signs of US sanctions against radio makers apart from Huawei and ZTE, and Papa did not respond to a follow-up question. But if he is suggesting the open RAN supply chain would rely on Chinese radios, that is probably not what US policymakers had in mind.

The main beneficiary of this policy has been Samsung, he says. The huge South Korean vendor, with its annual research-and-development budget of $17.2 billion, was preferred to both Parallel Wireless and Mavenir, another US supplier, when Vodafone embarked on a 2,500-site, open RAN swap-out of Huawei equipment in the UK.

In the US, Verizon picked it over Nokia for a major 5G rollout. Dish Network, the only US service provider investing heavily in open RAN, also added Samsung to its Torah scroll-sized list of suppliers in May.

Owned by Siris Capital and Koch Industries, Mavenir also features on that list as a baseband vendor. But it lacks any other high-profile deals.

Although its annual revenues are understood to have risen to about $600 million, from the $427 million it reported for 2020 (when it had planned an initial public offering), it generates most of its sales in other software markets, including the 5G core.

The other US company usually named in conversations about open RAN is Altiostar. It also has an agreement with Dish, is contracted to provide the baseband software for 1&1, a German greenfield investor, and has made some inroads with Spain's Telefónica.

Most significantly, Altiostar powers the network of Japan's Rakuten. The downside, from a US perspective, is that Altiostar is not under American control. It was bought by Rakuten last year.

But the real winner in the broader 5G market is Ericsson. In 2017 – the year before open RAN became a thing with the formation of the O-RAN Alliance specifications group – the Swedish company claimed 33% of the RAN market outside China, where Western vendors are even less popular than Chinese ones are in the West.

Aided by an anti-Huawei backlash and some 5G difficulties at Nokia, and strengthened by its own investment in 5G, it now boasts a 39% share.

Papa's other big gripe is that funding has not materialized as promised. In the case of Parallel Wireless, he was previously in talks about raising money from Juniper Networks, a US maker of Internet routers and switches, but failed to secure any commitment before the news about layoffs, according to multiple sources.

Papa declined to comment on that issue and seems mainly to be sore about open RAN pledges made and not honored by US authorities.

Among them was a promise to fund the replacement of Huawei and ZTE equipment still used by dozens of small US operators, which struck deals with the Chinese vendors in happier days for US-China relations.

Earlier this week, the Federal Communications Commission acknowledged the $2 billion it has released will be insufficient, estimating the entire program will cost nearly $5 billion.

"Thus they FROZE [his capitals] the meaningful rural US market (nobody buying) for three to four years with nothing close to what was promised in the end," said Papa.

"What does this do to the investment and innovation cycle?"

Yet there is no guarantee that additional government funding for this "rip and replace" program would help Parallel Wireless or other open RAN specialists.

Ericsson and Nokia have won nearly all the contracts announced so far. In fact, the only exception appears to be a deal between Mavenir and Triangle Communications, an operator based in Montana.

On the money front, Papa also appears upset the US has not done more internationally to cosset open RAN.

"There were earlier promises of broad-based ExIm [export-import] funding for telecom to counter belt and road support for Chinese telecom," he said.

"Have you seen evidence of the funding?"

Biden's sojourn in Saudi Arabia with a murderous tyrant could, of course, present ExIm-related opportunities, albeit with controversial origins.

Despite the rocketing inflation and widely reported supply-chain problems, industry analysts have insisted the Parallel Wireless problems are not evidence of a deeper open RAN malaise.

Omdia, a sister company to Light Reading, predicts it will account for about 5% of the RAN market this year, growing to 15% by 2026. But this says nothing about the nationalities and companies that will share in the spoils.

For the Parallel Wireless employees who lost their jobs, Biden's Gulf bluster about open RAN must sound wildly off-key.