I've often said that network functions virtualization (NFV) is about bringing cloud technologies to the telco network. One of the biggest benefits of such a transition is the replacement of closed appliances with open servers. The most common of these servers are built on Intel architecture (IA), but other architecture options are available, including ARM.

What are the considerations that go into selecting a CPU architecture for universal CPE (uCPE)?

RISC vs. CISC
Reams and reams of paper have been wasted on this topic. With modern compilers, it just doesn't matter.

Material cost
Many operators expected that one of the big benefits of NFV would be a reduction in the material cost of delivering a service. Those expectations have been reduced, but the cost of the server is still very important. This is especially true for uCPE and small/medium business (SMB) applications.

Suppliers of ARM CPUs have positioned themselves as being able to reduce cost vs. IA CPUs. Is that really the case, especially at the low end of the market? I think the answer is mostly "no," for two reasons:

1. Intel has been very aggressive with pricing on the Atom Rangeley and Denverton series of CPUs. This has minimized any cost savings from ARM: The result is cost savings for the consumers of low-end servers.

2. CPU cost is a relatively small part of system cost at the low end. I did an analysis of the makeup of material cost of a low-end server. Heres a chart that summarizes my findings: 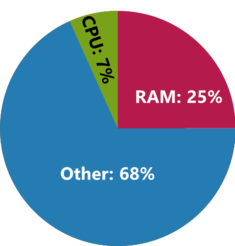 Breakdown of material cost of a low-end server.

As shown, system cost is dominated by "other," which includes power, mechanicals, non-volatile storage and peripherals. The CPU itself accounts for only 7% of system cost. Cutting the CPU cost in half would have a negligible effect. A much bigger factor is RAM, which makes up a quarter of the system cost. Reducing RAM is a much better path to reducing system cost than is squeezing the CPU portion.

Compute power
We spend a lot of time talking about cores, clock frequency and speed tests. The truth is, comparing raw CPU performance is very difficult. Other aspects of the system design -- memory speed and layout, caching, smart NICs -- may dominate baseline CPU performance. CPU compute power may be a differentiator in specialized applications, but is a wash for generic uCPE usage.

COTS offerings
As a company that develops NFV infrastructure (NFVi) software that needs to run on a wide range of commercial off-the-shelf (COTS) servers, the team at ADVA Ensemble has concluded that the choice in server size, features and country of origin is a key element of NFV. We've seen a much larger offering of servers based on IA than on ARM.

Software ecosystem
A big part of the software ecosystem is open source tools, operating systems and projects. Regarding the first two, the choice between ARM and Intel is negligible. Where we see a big difference is in the world of open source projects: Intel made a smart decision to provide funding, resources and engineers for a wide variety of open source developments. ARM hasn't yet caught up.

The other side of the software ecosystem is virtual network functions (VNFs) such as SD-WAN, routers and firewalls. We're seeing a much broader set of offerings targeted for IA CPUs.

Consider the total solution
At ADVA we use both IA and ARM processors in our products. Neither is perfect, and they have pros and cons that led to those selections.

The ADVA Ensemble division targets its software for the servers and architectures that our customers want. Today that's largely IA, but we expect ARM to be a factor. However, any such migration will be based on a realistic view of the overall solution, not on negligible differences in price or power. I suggest you take a holistic view when evaluating uCPE architectures, including the software ecosystem and commercial offerings. Don't get tripped up in the minutia.

Interesting article. One area that must be discussed as well is the amount of SW that needs to be loaded on these uCPEs. Between OTT VNFs and NFVI OS stacks, performance take a hit and the ability of the Carriers to add differentiaing, revenue generating, functionality is limited. The ARM approach to uCPE alleviates this situation in two ways :

2) Ability to cost effectively scale in core count - while the relative portion of a 4 cores CPU in the total uCPE BOM might be small, it is not necessarily the case when moving to 8 cores. ARM architecure allows you to do just that without taking a big CAPEX hit.

Reply | Post Message | MESSAGES LIST | START A BOARD
EDUCATIONAL RESOURCES
sponsor supplied content
Trends in the Communications Industry
How to Gain the Edge in the Fiber Broadband Boom
A new approach to billing for a new generation of customers
CBRS Spectrum and the Future of Private Wireless Networks
Smart Edge: Productizing Edge Deployment
Interview: Open RAN enabling CSPs to deliver on the promise of 5G
Keynote: Open RAN: The Next Step
Webinar: Open RAN in 2022: Enabling a Continuous Flow of Innovation
Educational Resources Archive
More Blogs from Column
'Thanks guys, great quarter'