NEW YORK CITY -- Undetered by the flaming crash-landing of its last Note model in 2016, Samsung, on Wednesday, unveiled the Note 8 in New York City: a 6.3-inch "phablet" with "Gigabit LTE," dual cameras on the back and a retail price pushing towards $1,000 in the US.

In the rarified climes of the Park Avenue Armory off Central Park in Manhattan, Samsung Electronics Co. Ltd. (Korea: SEC) showed off its latest creation to a capacity crowd of journalists and employees from around the world.

Some of the most notable features initially, given very limited test time, are the 12 megapixels dual back-mounted cameras -- one with a wide-angle lens and one with 2x optical zoom. The stylus-equipped phablet also allows users to translate words on the web into English by highlighting a sentence with the "S-Pen." 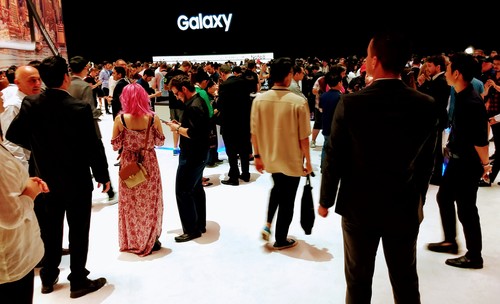 It was a busy day in NYC for Samsung.

"While for Samsung, the Note 8 hardware design may seem conservative, for every other OEM the Note 8 would be an astounding technical achievement that almost all no other OEMs is yet able to match," said IHS Markit Analysis in a research note. "Only Apple has comparable research and development resources to Samsung."

Your correspondent, meanwhile, was briefly interviewed on-site by South Korean TV, which wanted to get my first impressions. But of course, they also wanted to know if I thought the Note 8 could suffer from the explosive problems of the Note 7. (See Samsung's NoteGate: Winners & Losers.)

"You can only assume they spent a long time testing that," I said. It was not, however, an issue addressed by Samsung execs today.

Samsung did say today, however, that former Note 7 owners are eligible for an "instant trade-in value of up to $425 when they upgrade their current phone for a Galaxy Note 8."

mendyk 8/24/2017 | 2:58:08 PM
Re: So will you pay a thousand bucks for a phone? The jack thing will be interesting -- maybe the first time millennials have to deal with imposed obsolescence.
Reply | Post Message | MESSAGES LIST | START A BOARD

DanJones 8/24/2017 | 2:51:12 PM
Re: So will you pay a thousand bucks for a phone? They were super snarky about how they're keeping a real headphone jack, as opposed to Apple.
Reply | Post Message | MESSAGES LIST | START A BOARD