'Upswitching' From LTE Trips Up 5G Latency In South Korea

According to a detailed new report from IHS Markit's RootMetrics, 5G speeds in South Korea are blazing fast -- except when users must wait for their connection to first switch from LTE to 5G so they can actually access those blazing-fast 5G speeds.

This shift from LTE to 5G is called "upswitching," and according to the network-testing firm it can play a big role in the overall 5G user experience. "The best end-user download latency experience could be delivered not necessarily by the operator that offers the best pure 5G performance but by the network that most efficiently handles upswitching," authors Suzanth Subramaniyan and Patrick Linder wrote in the firm's report, released today.

For example, the firm found that the need to upswitch from LTE to 5G raised KT's initial 5G latency to 244ms, from just 88ms in cases where it was not necessary.

Latency is the measure of how fast a user's request can be answered, usually in ms, and is different from the raw upload and download speeds that comprise an actual data session, often measured in Mbit/s or, in the case of 5G, Gbit/s. Nonetheless, latency is an important measurement considering 5G has been sold not only as a much faster wireless technology but also one that can handle real-time services due to lower latency.

The upswitching issue is a byproduct of the global wireless industry's rush to 5G. In order to bring the technology to market more quickly, wireless operators and their equipment vendors decided to implement the "NSA" version of 5G first. NSA stands for "non-standalone" 5G, and essentially requires a supporting 4G LTE network to handle things like voice calling, light messaging, authentication and cell site handoff. In the next year or two, operators such as Verizon and T-Mobile are planning to move to the "standalone" (SA) version of 5G, which does not require a supporting LTE network.

As the RootMetrics authors explain, South Korea's 5G customers actually spend much of their time on LTE, even if they're in range of a 5G signal, because staying on LTE is better for phones' battery life and call performance. Because customers are often left on LTE by default, they first need to switch to 5G to conduct a 5G data session. The time it takes to "upswitch" to 5G is what's causing the longer latency during the first part of a 5G data session. "As long as upswitching is necessary, download latency will be affected at the beginning of that data task," the RootMetrics authors wrote. "Moreover, the more that 5G latency improves, the greater the impact of this need to upswitch: the closer that 5G response times come to being nearly instantaneous, the more significant the impact of delays needed for upswitching."

To be clear, the RootMetrics authors said the upswitching issue won't affect applications like VR or online gaming because those mostly make use of a continuous 5G data session.

To highlight its upswitching findings, RootMetrics showed how latency during the first part a download task is much higher than in the immediately following download efforts when changing from LTE to 5G: 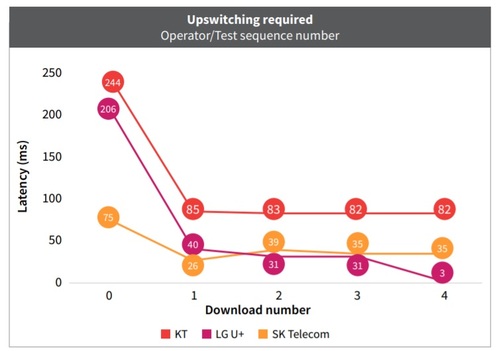 But in situations where 5G was already active, upswitching was not required and therefore the first part of the download showed low latency: 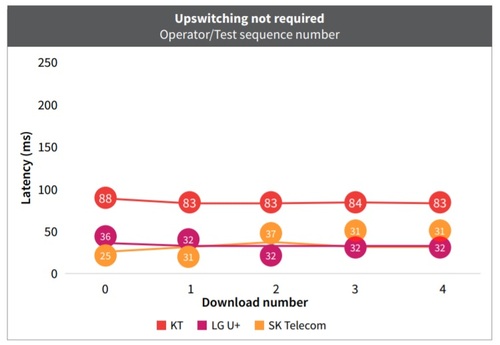 Now, here's where things get more interesting -- and more complicated. RootMetrics measured upswitching across the three operators in South Korea that are offering 5G services: SK Telecom, KT and LG U+. The firm found that LG U+ provided the best latency measurements, which RootMetrics said could be due to either the vendors the operator is using or the settings it decided to implement in its network. LG U+ is using Huawei equipment in the Seoul metro area and Nokia for outlying areas. In contrast, KT and SK Telecom are using a combination of Ericsson, Nokia and Samsung 5G equipment.

Operator decisions may also be at play, the authors noted. "Setting a longer time for 5G-mode to stay active during periods of data inactivity can help prevent upswitching and therefore improve latency," they noted. "But there is a trade-off to increasing 5G idle time: battery life will decrease and call performance could potentially degrade because the network now needs to 'downswitch' from 5G in order to make or accept a voice call. A shorter 5G idle time, in contrast, improves battery life and ensures voice calls don't need to downswitch but, as we have seen, increases latency for 5G data tasks."

Upswitching is one of the many issues that operators are facing as they enter the 5G field using the NSA version of 5G. Another is exactly how to display a 5G connection icon to users considering actual 5G connections on NSA can be ephemeral at best.

Operators in South Korea were among the first in the world to launch 5G; SK Telecom recently announced it already counts more than 1 million 5G customers.