Three UK to Go Big on 5G for Home Broadband

Ever since it tried and failed to merge with bigger rival O2 in 2016, Three UK has been the problem child of the UK telecom industry. Some 15 years after it first bowled into the country raving about 3G technology, it remains a teenager in need of a growth spurt, with just 12% of UK mobile customers. Its stroppy insistence that it can enjoy a successful career as a mobile-only service provider irritates those who champion fixed-mobile "convergence" as the key to a long and prosperous life. Where does Three go next?

The answer is growing clearer. Following a drip feed of announcements this year about network deals, and the acquisition of spectrum to support new 5G services, Three UK has been strutting its improved physique and sounding newly ambitious. Dave Dyson, its CEO, now says he wants to "double" the size of the business. And with few opportunities available to Three in the UK's saturated mobile market, it is through an attack on his rivals' broadband fiefdoms that he expects to deliver much of this growth. (See Digging Deeper Into Three UK's Transformation Program.) 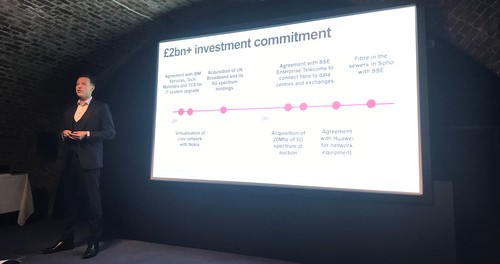 Dave Dyson, Three's CEO, says his company has made a £2 billion commitment to 5G rollout.

That does not mean Three is giving up its aversion to last-mile fixed lines. Rather like Verizon Communications Inc. (NYSE: VZ) in the US market, its aim is to use 5G as a residential broadband alternative to fiber, cable and copper. But Three's plan is on a much grander scale. While Verizon and others see 5G as a fill-in where fixed lines are unavailable, and where building them would be too expensive, Three appears to have near-nationwide aspirations. (See Verizon to Launch Fixed 5G Service on Oct. 1.)

It is not starting entirely from scratch. Last year, Three spent £250 million ($322 million) to acquire a residential broadband business called UK Broadband, which has been trading under the Relish brand. Rather like Three, it neither owns nor operates last-mile fixed lines, and instead uses 4G technology to provide broadband services. Today, it has between 150 and 200 4G mobile sites across central London, where it serves around 20,000 customers. But it has never developed a presence in other parts of the country. "It would have been too expensive to build a national footprint," said Dyson. (See 3 to Bag 5G Spectrum With £300M UK Broadband Move.)

The economics look very different with 5G, however, thanks largely to a re-architecting of Three's entire mobile network. Of real significance is a deal with SSE Enterprise Telecoms, a UK provider of fiber-optic networks and data-center services. SSE is connecting 20 state-of-the-art data centers Three has built across the UK in a major expansion of its data center footprint, which previously featured just three facilities in England. It is also helping Three to run fiber connections between mobile masts and "unbundled" fiber exchanges owned by UK telecom incumbent BT Group plc (NYSE: BT; London: BTA), providing "backhaul" for high-speed services. SSE's initial contract covers 177 of these exchanges, but Three's ultimate target is for about 440. (See Eurobites: Three UK Preps for 5G With Backbone Deal.) 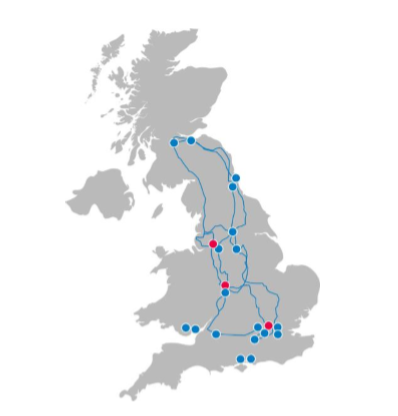 Three is building new data centers across the UK (major locations shown in blue), having previously had just three in England (shown in red).

Gabriel Brown, a principal analyst with Heavy Reading, thinks a deal of that magnitude would cover about 80% of the UK's population, including all the country's "top markets." As Three upgrades its mobile network to support 5G technology, it could more economically factor residential broadband into its plans. "We'll load sites with the best antenna technology and spectrum we've got and do as much as we can in one visit," said Dyson. "When we launch we'll have spare capacity for which the incremental cost is low, and that is an opportunity to start to roll out home broadband on a much bigger footprint than Relish has today."

The important thing about the Relish takeover is the additional spectrum it brought. Following the UK's initial 5G spectrum auction earlier this year, Three now claims to have more 5G spectrum than any other UK operator. Indeed, when it comes to the "mid-band" spectrum (between 3.4GHz and 3.8GHz) now freed up for 5G, its 144MHz dramatically exceeds what any rival holds. With this advantage, Three reckons it will be able to provide peak 5G speeds of about 3 Gbit/s. No rival will manage more than 2 Gbit/s, it boasts. (See UK's £1.4B '5G' auction looks bad for industry.)

Three's overhaul of its radio access network should also help. Having developed its 3G network with Finland's Nokia Corp. (NYSE: NOK), and used South Korea's Samsung Electronics Co. Ltd. (Korea: SEC) on 4G, the operator has turned to China's Huawei Technologies Co. Ltd. in the 5G era. By relying on a sophisticated new antenna technology called massive MIMO, it aims to boost coverage and capacity on the 5G network. Phil Sheppard, Three's director of network strategy, reckons massive MIMO will obviate the need for network "densification," allowing Three to overlay its mid-band network on the same "grid" used for 3G and 4G services. Three is also counting on an overall capacity gain of three to five times compared with 4G. (See Nokia, Samsung Miss Out as Three UK Gives 5G Job to Huawei.)