So said Donald Rumsfeld, then US Secretary of Defense, during a news briefing on Iraq in 2002. At its recent 5G briefing in Paris, Orange (NYSE: FTE) had less cause for shifty behavior than a controversial US politician plotting a potentially illegal war in the Middle East. But there was a Rumsfeldian rumble to its ruminations about mobile 5G: a smattering of definites and a drumbeat of maybes and don't knows.

Orange Hopes 5G Will Be Fruitful 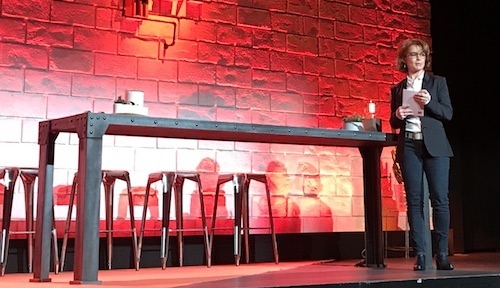 Mari-Nöelle Jégo-Laveissière, Orange's executive director of innovation, marketing and technologies, says the French operator will introduce its first 5G services in 2020 or 2021.

Fair enough. The next-generation mobile technology is still in development. Its rollout could take many years. Nobody knows how 5G will ultimately shape up or be received by the market. Few operators, and hardly any in Europe, have divulged details of their 5G strategy. T-Mobile US Inc. is perhaps the only one to have attached a date -- 2020, in its case -- to any kind of "nationwide" commitment. (See Is T-Mobile's 5G Plan Just a Pipe Dream?)

Even so, besides sharing a few concrete details in Paris about its 5G plans, Orange did shed some light on the uncertainties that still surround 5G development. The unknowns are less unknown, Rumsfeld might have said. That contributes to an understanding of how France's biggest operator will launch 5G services, and build the networks to support them. It might even hold clues about the way Europe's other big operators are approaching 5G. (See Huawei Frozen Out of Orange's 5G Paris Party.)

Known knowns
What the industry now knows for sure is that about 200 engineers in Orange's 152,000-employee organization are testing and carrying out 5G trials with a range of network partners. In Romania, in alliance with Cisco Systems Inc. (Nasdaq: CSCO) and Samsung Electronics Co. Ltd. (Korea: SEC), Orange is to look at using 5G instead of fiber to support residential broadband services. When it comes to mobile 5G, it has teamed up with Ericsson AB (Nasdaq: ERIC), Nokia Corp. (NYSE: NOK) and a German antenna specialist called Kathrein.

A radio project involving Nokia and Kathrein holds particular interest. The two vendors are currently designing a new smart antenna that will be installable at existing mobile sites. Their idea is to come up with a product that can manage 5G as well as older network technologies. If small enough, these could help to cut down on space and power needs, bolstering the 5G investment case.

While Kathrein develops the "passive" antenna technology that goes with 4G (as well as 2G and 3G), Nokia is contributing its expertise in "smart" antennas and a 5G technology called massive MIMO. This boosts performance by dramatically increasing the number of data streams that can be sent over a radio channel. With an "active" antenna component, signals can be concentrated like the beam of a torch on end-user devices, instead of blanketing an area like a floodlight.

"The goal is to integrate the new 5G antenna as quickly and discreetly as possible so there is just one antenna per site managing all of the technologies," said Pascal Agin, the head of Nokia's 5G radio access networks (RAN) business.

Nokia, it emerged, is also collaborating with Orange on artificial intelligence (AI) and its application to 5G. Networks based on machine learning could make predictions about usage levels and adapt capacity to suit the immediate needs, said Mari-Nöelle Jégo-Laveissière, Orange's executive director of innovation, marketing and technologies. "We could adjust the 5G network depending on the population that is there and the events that might happen," she said.

Nokia's Swedish rival Ericsson has a prominent role in the opening act of Orange's 5G drama, too. In the towns of Lille and Douai, it will be the chief protagonist in "end-to-end" tests of 5G technology that Orange carries out this year. These will rely partly on spectrum in the 700MHz range, which Orange acquired during a government auction in 2015, when it paid 932 million ($1.13 billion) for a 10MHz allocation. Spectrum between the 3.4GHz and 3.8GHz ranges, which authorities have yet to license, will also be used.

The Lille and Douai tests, analysts and reporters were told, will partly explore the virtualization of the RAN. Most of today's operators process radio signals using baseband gear at mobile sites. With virtualization, they could do it off X86 servers in a form of edge computing, whereby IT resources are housed not in central data centers but at smaller facilities much closer to end-user devices. The move could hold economic and service attractions. (See Facebook's TIP Seizes vRAN Initiative From 3GPP.)

Trials will initially focus on the non-standalone (NSA) version of 5G technology. That means using the 5G New Radio specifications, which were frozen at the end of 2017, in tandem with a 4G core network. For the new 5G core, Orange would need the standalone (SA) variant due to be locked down in June. NSA technology will not support the fancier features that come with SA, but it may allow operators to introduce 5G more quickly. (See 5G Is Official: First 3GPP Specs Approved.)

Next page: Known and unknown unknowns

kq4ym 2/26/2018 | 6:57:11 AM
Re: Orange's 5G Plan Yes the forward thinking and trials will certainly give them an advantage in the market. And watching the technical aspects of the super tiny antenna development will most likely play a big part in making 5G actually work and the possible replacement for some fiber installations in urban areas.
Reply | Post Message | MESSAGES LIST | START A BOARD

iainmorris 2/12/2018 | 10:17:38 AM
Re: Orange's 5G Plan Agreed. Despite all the uncertainties, Orange seems as organized and forward-thinking as any operator in this area.
Reply | Post Message | MESSAGES LIST | START A BOARD

Gabriel Brown 2/12/2018 | 6:10:28 AM
Orange's 5G Plan Having attended the same event as Iain, I thought Orange's 5G plans well judged: ambitious, for sure, but grounded in thorough prepration and guided by the results of field trials.

For progressive operators that want to launch in the nearer-term at scale, a good test and trial program is essential to efficient capex. You need a lot of "maybes" at this point.