The impact of 5G from a data traffic and connectivity standpoint is expected to emerge in about three years' time, as a new Cisco Systems study predicts that nearly 12% of global mobile data traffic will come from 5G connections by 2022.

That's the result of 5G deployment activity that has already begun but which is set to become widespread by 2022, according to Cisco's latest Visual Networking Index (VNI) Global Mobile Data Traffic Forecast, 2017-2022, which is based on a mix of independent analyst forecasts and real-world network usage data. 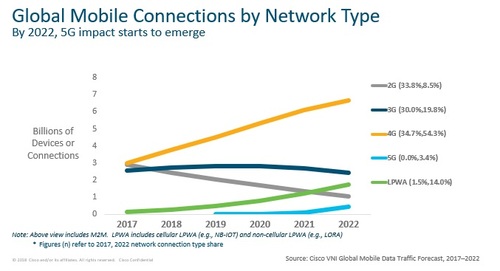 Cisco's new forecast also sees 5G connections representing just 3.4% of total global cellular connectivity by network type by 2022. That compares to 54% for 4G, 20% for 3G, 8% for 2G and 14% for LPWA (low-power wide area) networks that include both cellular (such as narrowband-IoT) and non-cellular technologies, such as LoRA.

Though 4G traffic will continue to grow and dominate the mobile landscape by a wide margin in 2022, it will start to enter a "stabilization era" as 5G enters the picture in a bigger way with trials and deployments, Shruti Jain, a senior analyst at Cisco, said.

Looking at specific regions, North America is expected to have the greatest proportion of 5G connections by 2022, with 8.9% of the region's total. Western Europe follows in second (6.4%), with Asia-Pacific (3.6%) and Latin America (1%) trailing behind.

Those loftier speeds on 5G will also lead to a big expected increase in data consumption, with Cisco predicting that an average 5G connection in 2022 will generate about 22 Gbytes of data per month, roughly three times more than the 8 Gbytes per month generated by 4G connections.