As commercial mobile 5G services arrive in more and more cities around the country, there's one big question that Americans are asking: Do I really need to pay for my home broadband connection in addition to my phone service?

An increasing number are answering that question with a firm "No."

According to the Pew Research Center, the percentage of US adults who own a smartphone but who do not pay for a home broadband Internet connection has been slowly rising over the past few years: 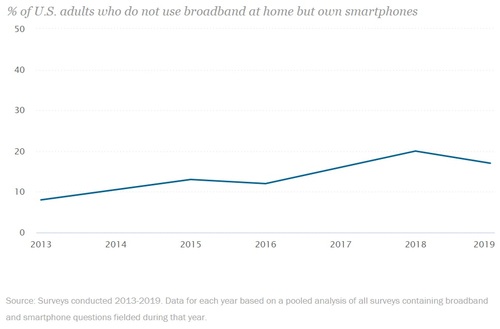 Other Wall Street research firms have found some growth in the figure as well. For example, the analysts at New Street Research in a report last year found that roughly 5% of Internet households are currently wireless-only, based on census data and the firm's proprietary survey. The analysts added that the overall percentage of wireless-only households hasn't really grown much over the past few years, but that it did spike a bit between 2016 and 2017. The firm attributed that growth in part to T-Mobile's launch of Binge On video streaming and the subsequent introduction of unlimited wireless data plans across most of the US wireless industry. 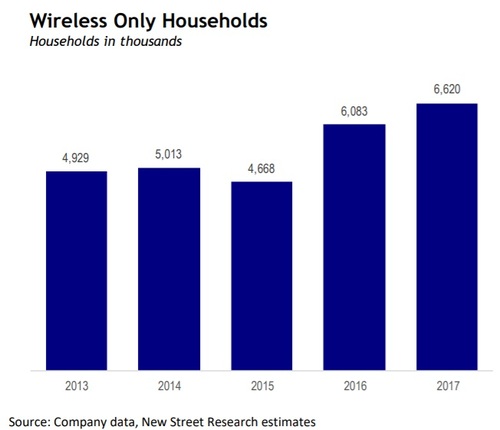 Perhaps the newest figures on the topic come from a nationwide survey of around 1,100 respondents distributed by the Wall Street research analysts at Cowen. Their survey, conducted in the second quarter of this year, found that roughly 12% of the customers among Sprint, T-Mobile, Verizon and AT&T do not pay for in-home, wired broadband Internet. That number is a slight decline from the 13% the firm recorded in its first quarter survey. 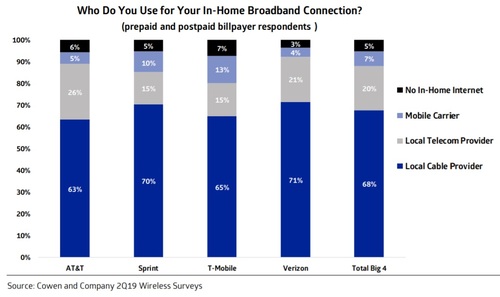 So will 5G phones entice even more Americans to cancel their wired home Internet service? Some analysts believe so. "We estimate ~5% of wireless subscribers rely solely on mobile broadband today. Moreover, SNL Kagan forecasts this percentage to rise to 13% by 2023," wrote the analysts at Nomura's Instinet, a Wall Street research firm, in a recent note to investors. The analysts explained that fixed and mobile 5G services will increasingly appeal to "price-sensitive broadband customers."

The devil in the details
However, there are plenty of indications that 5G won't spark a mass migration from wired Internet to wireless, at least not yet. That's due to a wide range of factors, including the fact that so much stuff is moving online and that 5G providers aren't really rushing to take over.

The causes for this growth in home Internet traffic are pretty obvious to anyone who has watched YouTube, Netflix or any other video service on the Internet, particularly on a big-screen TV -- these services chew through lots of data. Indeed, according to Cisco, fully 82% of all Internet traffic globally will be video by 2022. The firm said that overall global Internet traffic will increase threefold over the next five years.

Because of those kinds of forecasts, the analysts at New Street Research predicted that the average American household will consume more than 800GB per month by 2023.

That's a lot of data. And, as it stands now, 5G simply isn't going to keep pace, mainly because operators don't really want it to.

Take the example of Verizon, which is lighting up mobile 5G in cities around the country. The operator's service supports speeds of around 400Mbit/s, but Verizon is capping usage on its first 5G hotspot device at just 50GB per month. After the 50GB cap, customers' speeds are slowed to 3Mbit/s. That's important because hotspot gadgets like Verizon's new Inseego 5G MiFi M1000 could potentially be used by customers as a replacement for their home Internet connection -- except Verizon clearly doesn't want them to do that, as shown by its 50GB cap.

The reason for this is clear. Verizon wants to make sure that customers pay for mobile and home Internet separately. After all, Verizon's 5G Home service uses fixed 5G technology to beam unlimited, uncapped Internet services at 300Mbit/s into customers' homes and offices -- but that service costs an extra $50 per month for Verizon's mobile customers.

What's noteworthy here is that Verizon's network engineers have clearly stated that Verizon's mobile 5G service and its 5G Home service use almost exactly the same equipment. The only real difference is the price.

With all this in mind, the analysts at New Street offer a pretty dim outlook on the possibility of mobile 5G replacing in-home, wired Internet connections. The firm predicted that the growth of wireless-only households will slow from 9% in 2018 to just 4% in 2023. 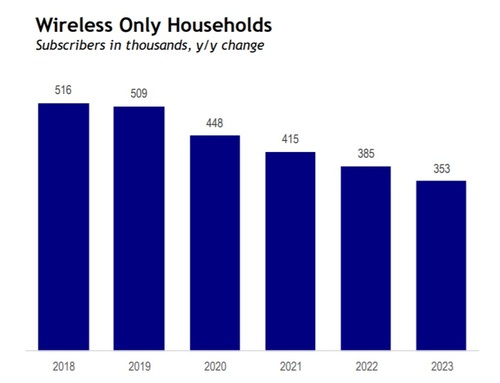 FastCache 7/30/2019 | 2:54:56 AM
Re: Impact on personal computers There are just no applications that would trigger a tablet renewal cycle.  Email, browsing, streaming and basic games work just fine on any decent tablet from the past few years.  Of course, extreme gaming requires a more specialized compute platform.
Reply | Post Message | MESSAGES LIST | START A BOARD

Mike Dano 7/29/2019 | 2:26:54 PM
Re: Impact on personal computers I suspect its people without laptops or with old laptops who only want to do email and light browsing and figure their phone is good enough. Tablet sales are mostly cratering from what I understand.
Reply | Post Message | MESSAGES LIST | START A BOARD

Kelsey Ziser 7/29/2019 | 2:07:31 PM
Impact on personal computers Do you think the decline in home broadband use also means that fewer consumers are purchasing personal laptops? Are tablets more popular? Are they foregoing both in favor of using their phone? Or do they just use their phone as a hotspot when they need to use their laptop?
Reply | Post Message | MESSAGES LIST | START A BOARD
EDUCATIONAL RESOURCES