Don't Hold Your Breath for Laptops With 5G

Smartphones will drive demand for 5G chipsets, but the companies that make these chips are working hard to develop adjacent markets as well. One of the biggest opportunities for 5G in devices beyond smartphones is the laptop.

However, 5G laptops have not yet hit the market in a meaningful way.

Similarly, Intel announced its plans to partner with Taiwan's MediaTek on a 5G laptop in November 2019. Earlier in the year, Intel sold its smartphone modem business to Apple, but by leveraging the Taiwanese company's smartphone modem expertise, Intel plans to enter the market for 5G PC modems.

"They want to have a competitive response to [Qualcomm]," explained analyst Jon Erensen, senior director for semiconductor research at consulting firm Gartner. "If demand for that feature picks up, Intel wants to be able to say 'Hey, we've got that capability too.' "

5G to build on LTE
Erensen estimates that fewer than 5% of the PCs on the market today offer cellular connectivity. WiFi is becoming pretty much ubiquitous, and unlimited cellular data plans make it inexpensive to tether a laptop to a smartphone, so built-in LTE may not make much difference to most laptop owners. And despite the relative success of its LTE-enabled iPad, Apple hasn't deemed the cellular PC market worthy of investment; its laptops do not offer LTE.

The Gartner team does not see 5G-based PCs taking off in the near future. It is projecting no revenue for semiconductor companies from 5G-enabled computers this year. Next year, it projects $70 million in revenue and for 2021, $167 million. Meanwhile Gartner expects semiconductor makers to sell almost a billion dollars worth of 5G chips to smartphone makers this year, and the analysts think the market will skyrocket next year, with chipmakers selling $10.4 billion worth of 5G chips to smartphone makers in 2020, and $17.3 billion in 2021. 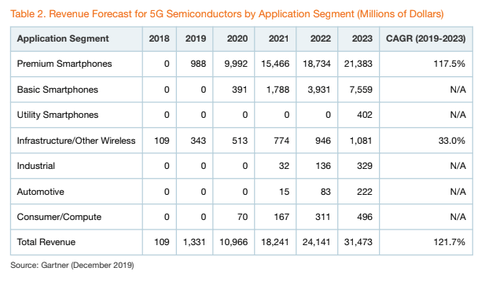 Erensen said PC makers are working to create ultramobiles that can "act more like smartphones, being always connected. When you open them up, they've been syncing content in the background. But there are challenges too... particularly the cost of doing that, not just for the hardware like the modem inside the device but more for the service that's attached to it, and how flexible the carriers will be with those service plans is something that I think will have a big impact on the ultimate penetration rate or adoption that we see for the technology."

More possible 5G drivers
Gaming is another driver of demand for portable computers, and that's good news for 5G chipmakers, because cloud-based gaming is emerging as an important 5G use case. 5G could offer gamers the ability to play with remote opponents in real-time and to experience virtual reality in their games.

Another trend that could boost the demand for laptops that connect to cellular networks is mobile cloud. As companies start to store more mission-critical documents in the cloud, they will want their employees to access these documents over highly secure networks, and public WiFi may not cut it. So corporate PC buyers may start to look for cellular connectivity in laptops. But LTE could satisfy their needs; it is not yet clear that 5G will be a big value-add for corporate IT departments when they procure laptop computers.

"I'm not sure it's critical right now," said Erensen. "When 5G gets more interesting is when you build out the 5G core network... When you go to the standalone [5G] networks, that's when some of the really unique capabilities of 5G come into play, things like ultra-low latency, like the higher reliability. As you do that, then you can start to think about the applications that would benefit from that."

I believe that 5G is the future of our world. Using mobile clouds can help to connect to more networks.
It's okay to pay more for 5G for companies. ESA companies are ready to get quality internet.

Having a dog at home? Great! But this also means that you will have to face a lot of interference from him when decorating the house for Christmas. Christmas tree and other decorations are beautiful and they are quite fascinating for Coco also.

Christmas is a wonderful time to spend time with all your dear and near ones. Coco is here to help you and make sure that you get a valid emotional support dog letter to live and spend each Christmas with your beloved canine family member.


However, having a pet dog or an emotional support dog at home does not mean that you cannot decorate your house or keep the decor safe from him. Below are some of the ways to make your Christmas decoration dog or Coco- proof.

1. Place your Tree Higher or Get a Raised Christmas Tree: Instead of putting the tree directly on the floor, place it higher. Placing it high will prevent Coco from reaching the decor and chewing in them.

2. Use a Baby Gate to Keep Coco Away: Using a baby gate to block the room or the area having the Christmas tree or the room filled with the gifts. Putting a baby gate will also keep kids and small children away from all the decor.

3. Do not Use Low Hanging Christmas Lights: These lights are quite attractive for Coco also. To avoid any electrocution accidents, steer clear of them and find some alternative.

4. Do not Use Low Hanging Decor: Just like the lights, these low hanging 'fruits' are quite attractive for your dog and before you even know, he will be chewing on them. This could be dangerous for him so keep them away.

5. Hang Breakable Decoration Higher: Hang your fragile decor and tree ornaments higher and out of the reach of your naughty pup. Hanging them higher will enhance their look and keep them safe also.

6. Keep Plants Away: If you are using plants for decoration, it is better to keep them away and out of the reach of your pooch. They make lovely decorations but are dangerous for your dog if he bites them. Keep them higher or somewhere where Coco cannot reach them.

7. Do not Put the Gifts Yet: Instead of placing the Christmas gifts at the foot of the tree just now, place them on the Christmas day only. These gifts are very attractive for Coco and you do not want him to chew and destroy them.

8. Avoid Edible Tree Decor: Do not add any edible treats as the tree decoration. Coco is very interested in the Christmas tree and adding sweet treats is just like inviting an unlikely accident but first of all get your  free emotional support animal letter .

Clifton K Morris 12/27/2019 | 3:52:10 PM
China and Germany I see a big push for 5G modems across Europe, where Audi-owned Volkswagen owns 5G spectrum licenses, and Bosch along with Siemens are following suit. In Germany, companies are able to secure even newer Campus 5G licenses that sell for about 130 annually. These Campus licenses are for buildings, offices, and manufacturing.

China is unique in that they have taken 5G a step further to mandate all phones/devices sold starting in 2020 support not only 5G bands but also Campus/private LTE networks.

The licenses themselves are to be sold in a manner which is supposed to be similar to US CBRS PAL licenses, but with company deployment similar to WiFi. The 3GPP is including these new licenses as part of 5G Standalone/Release 16. Heres a video featuring Balazs Bertenyi, RAN Chair, 3GPP, and Deligate from Nokia that describes 5G wave 2. https://www.youtube.com/watch?v=9BV1wWw5C4s
Reply | Post Message | MESSAGES LIST | START A BOARD
EDUCATIONAL RESOURCES