AT&T's '5G E' Strategy Is Paying Off  Misleading or Not

AT&T received widespread condemnation when it decided to change the "LTE" icon on some of its phone to the "5G E" icon. However, based on a handful of new studies, it looks like the operator's strategy is beginning to bear fruit.

According to new data from Speedtest company Ookla, the download speeds on AT&T's LTE network increased by almost 50% in the first half of this year, compared with the same period last year. The firm said AT&T provided average download speeds of almost 33 Mbit/s during the first two quarters of this year. "Over the past year, AT&T has managed to leapfrog the competition to produce the fastest download speeds across the country," the firm wrote in its new report. AT&T first claimed the top spot in Ookla's quarterly reports in the first quarter of this year, knocking T-Mobile out of that position. 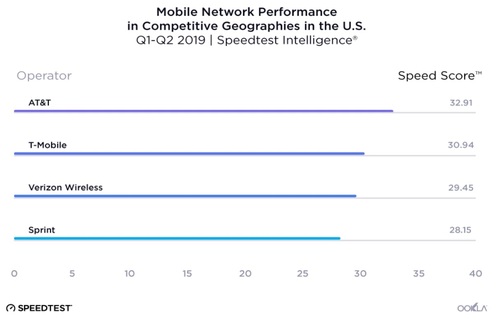 Ookla obtains its results via its Speedtest app installed on users' phones.

Ookla's results dovetail with similar findings from PCMag, which conducts extensive network drive tests across the US. The publication noted that, in its most recent tests, AT&T surpassed Verizon in terms of raw download speeds to earn the top spot in the country. "Verizon had a good run for the past five years with its nationwide LTE network, but AT&T has rocketed into the top spot this year," wrote PCMag's Sascha Segan. "The big push to improve its 4G LTE network in preparation for 5G pays off big time for AT&T it's America's fastest mobile network in 2019."

AT&T has made no secret of its plans to upgrade its LTE network. The company has deployed LTE technologies including LAA and carrier aggregation in recent years, which both Ookla and PCMag cited as reasons for AT&T's surging network performance. But Oookla, PCMag and others say one of the big reasons for AT&T's improvements is the amount of new spectrum it has deployed.

"AT&T is adding 60MHz of new spectrum to its wireless network this year, which should materially improve wireless data speeds and performance for its customers," wrote BTIG analyst Walter Piecyk roughly six months ago, when he predicted that AT&T's LTE upgrades could "unseat Verizons network dominance."

Indeed, the addition of more spectrum and improved network technologies are among the reasons AT&T cited for its decision to change the "LTE" icon on some of its phones to a "5G E" icon. Whether that's misleading or not, AT&T's executives are surely pleased with the results.