Kore Wireless has been around for about two decades, but the IoT tech specialist had a fresh start on October 1, when it made its debut on the New York Stock Exchange.

Heading into its IPO, Kore Wireless has been busy telling the story of how it can simplify enterprise IoT by using a connectivity and analytics management platform that works with an array of options spanning satellite-based networks, LoRaWAN technology and dozens of mobile network operator (MNO) partners. 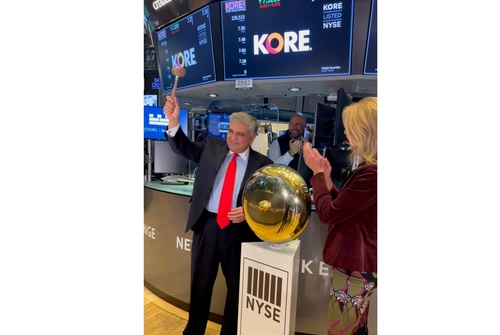 Bahl took the helm in 2017 after serving as CEO of an enterprise IoT company called Lochbridge. In May 2018, following an annual exploration of strategic alternatives for the company, the bankers said Kore had the "characteristics of a great public company," Bahl recalled. They noted that Kore had execs on board with public company experience combined with a resilient business model, good revenue visibility and sizable recurring revenue (Kore reported 91% recurring revenue in 2020).

Bahl said the idea was appealing to the board, as being publicly-held would help the company raise funds, pursue M&A opportunities and transform into a "one-stop-shop for IoT."

He said several SPACs came calling over the last year-and-a-half two years, but Kore did not get excited about that idea until engaging with CTAC, believing that such a combination would help to speed up the company's transformation and provide the company with much more flexibility.

One key element of Kore's IoT story stems from its broad range of connectivity partners around the globe. Below is an illustrative sampling of those partners:

Against that backdrop of partners, "we say it doesn't matter what connectivity you need [or] where you need it  we will get it sorted," Bahl explained, adding that the management piece Kore brings to the table assembles those myriad connectivity options "down to one screen."

That blend of connectivity and a platform that ties it all together is critical to scaling up IoT, he said. By way of example, he notes that a medical tech company that monitors pacemakers and ships products to almost 60 countries needed to stay connected to multiple mobile carriers in the US and abroad. Kore, he said, manages all of the logistics and work that puts it all together on a unified platform for the med-tech company, which doesn't have to worry about writing a bunch of connectivity contracts or managing a ton of SIMs (subscriber identify modules).

"We're actually getting data from more than 100 countries for this customer," Bahl said. "Just writing the contracts, getting onto 200 to 300 platforms to order SIMs to manage usage, would be unmanageable."

He believes that the IoT services market can finally emerge from its hype cycle now that elements such as interoperability, connectivity, security and ecosystem fragmentation are being solved with Kore's software-as-a-service approach.

Managing that technology and those partnerships is the "secret sauce" of Kore, Bahl said, holding that the company has spent a good deal of its existence building a "moat" around its intellectual property.

Kore has an installed base of about 3,600 customers, with brands such as Audi and Philips among them. Bahl said Kore is also working with enterprise IoT companies with roots in cable, including Comcast-owned MachineQ's and Cox Communications' Cox2M. "I'd characterize them as being customers, and we are enabling their IoT aspirations," he said.

Some analysts are bullish on Kore's prospects. LightShed Partners analyst Walter Piecyk initiated Kore Wireless with a "Buy" rating and a $14 price target. Kore closed Tuesday at $6.66, up 20 cents or 3.1%.

"We originally expected KORE's revenue growth to accelerate to 13% in 2021," Piecyk explained in this blog post (registration required). We now expect the growth rate to more than double to 16% this year. We, therefore, like KORE even more at current discounted levels."

Among the areas that Kore is focused on, the eSIM is "one of the things we're most excited about," Bahl said, hopeful that the company's support for that technology will help grow its business alongside the expansion of 5G networks and services.

Kore's approach is to support eSIM using a smart card that adheres to the GSMA specs. Bahl illustrated a Kore eSIM with three slots but said it a smartcard could be developed with five slots.

"It's a matter of how much money you want to spend on the real estate," he said, noting that Kore is building out eSIM profiles for a library of MNO partners. "But the point is this: We now enable you to update, over-the-air, in the field, to a different carrier."

That holds the potential to translate to a single SKU (stock keeping unit) for manufacturers and ultimately help them streamline their supply chains. "This is a gamechanger for large manufacturers who want to make connected products," Bahl said.

He acknowledges that the eSIM piece of Kore's business is in the early stages, estimating that about 1 million of the 5 million SIMs shipped in 2020 were of the eSIM variety. He expects the ratio to flip in favor of eSIMs in the coming years.

"It's starting to mature enough to where people are starting to buy in volume, and yet it's certainly going to get more mature over the coming years," Bahl said. "I don't know why a customer would ever not want to buy an eSIM."

Like what we have to say? Click here to sign up to our daily newsletter
COMMENTS
Newest First | Oldest First | Threaded View
Add Comment
Be the first to post a comment regarding this story.
EDUCATIONAL RESOURCES
sponsor supplied content
eBook: Monetize the Enterprise - 6 Ways to Capture the B2B Opportunity
eBook: The 3 Key Digital Mediation Challenges - And How to Solve Them
Case Study: APAC CSP Boosts Efficiency of Enterprise Operations with CSG
Private 5G Networks and Testing
Which Path to Convergence Is Right for You?
Data Center Top Tips: 10 Issues That Can't Wait
DDoS Trends Report
The Challenge of 5G Security
Building the 5G experience
Grow Your Revenues With Innovative Customer Engagements and Business Models
Educational Resources Archive
More Blogs from CxO Spotlight
DOCSIS 4.0 revenues a couple years out, Casa CEO says