Google is casting its subsea cable web wider, as the company is investing in the Japan-Guam-Australia Cable System, connecting Australia with Southeast Asia.

The 6,000-mile JGA cable system will provide two fiber pairs connecting Japan to Guam and two others connecting Guam to Sydney. NEC and Alcatalel Submarine Networks are building JGA. The JGA-South cables are being developed by a consortium of AARnet, Google and RTI-C. The JGA-North segment is a private cable being developed by RTI-C. Together, the segments will stretch 9,500km (or nearly 6,000 miles). 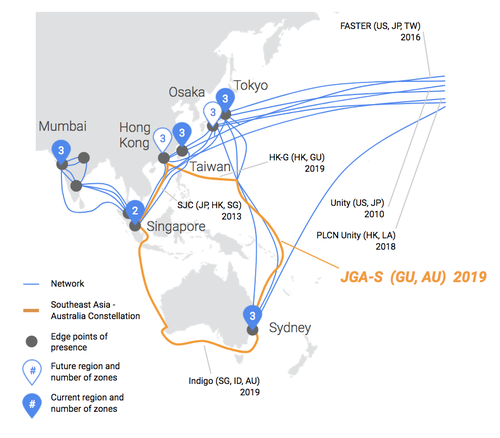 Google says its global network makes it a better platform for enterprise customers, giving cloud providers the connectivity, security and reliability they need to run their business on the cloud.

"Whether we're delivering directions to Maps users, videos to YouTube viewers, or [Google Cloud Platform] services to businesses, we know a fast and reliable infrastructure makes all the difference," Francois says. "That's why we continue to invest in strategic routes, many of which require crossing oceans."