Will AI Solve the IT Jobs Shortage?

ORLANDO, Fla. -- Gartner Symposium & ITxpo  The great fear of artificial intelligence, along with automation, is that the technology will become so powerful over the course of the next few years that it will take over most jobs, making most employees obsolete.

Over the course of the last year, several studies seem to have confirmed such concerns. (See AI Likely to Outperform Humans in Less Than 50 Years.)

However, what if that thinking has it backwards? What happens if AI can help fill a gap in the job market, especially in IT where there is a growing need for digital security, as well as the Internet of Things? If it's impossible to find enough qualified workers, why not automate more and more of these processes through AI?

The role of AI and how it can help companies that are trying to digitally transform their business and IT was one of the central themes of the opening keynote here as Peter Sondergaard, Gartner's executive vice president of research, looked at some of the major trends that are about to change IT over the two to three years. 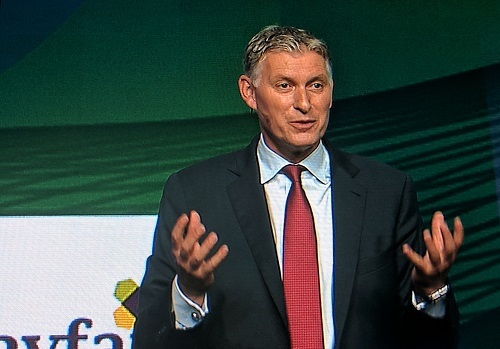 Specifically, Sondergaard spoke about the coming use of AI, not only as a way to overcome some of the skills gap, but also as a revolutionary technology in its own right.

"Organizations are struggling to find security talent," Sondergaard said during his keynote on October 2. "How will the job market fill the gap? It won't. Instead the answer lies in what is coming next. If we look to 2018 and beyond, we anticipate three high-demand skills: artificial intelligence, digital security and the Internet of Things. In addition to finding value on its own, we believe AI will be critical to solving both digital security and the IoT challenges."

When it comes to AI, Sondergaard urged the audience to hire what he called "AI leaders." However, this is where another problem comes in. Across the globe, there are about 8 million job candidates with IT skills -- however, of that number, only about 1,250 to 1,500 candidates have the right combination of AI skills to make a difference, according to Gartner.

Right now, businesses in the transportation, media and insurance industries are actively and aggressively recruiting these people.

What most enterprises should do is find different ways to bring this AI talent in, whether it's through recruiting new people, retraining other workers, partnering with other firms or simply renting out the people needed to complete the project.

At the same time companies are looking for AI talent, about 10% of all businesses are baking AI and machine learning into the recruitment process to automate some parts of it and return better results. As Sondergaard pointed out, AI is both pushing and pulling this IT hiring process.

As for the jobs that AI will eliminate, Sondergaard admitted that between now and 2020, AI will eliminate 1.8 million jobs, but also create 2.3 million at the same time. That's a net gain of about 500,000 positions worldwide.

"One year later, AI augmentation of the workforce will create about $3 trillion in business value, while saving billions of hours of work  so AI will help find, develop and augment your people. AI will be a net job creator starting in 2020."

Michelle 10/30/2017 | 7:14:22 PM
Re: AI will both eliminate and create new jobs I've wondered the same. Kids growing up with Alexa will have a very different experience and expectation of machines compared to kids who are digital-assistant-less. This could be very good as well. These kids will grow up expecting more from machines. This will be fantastic until the machines take over, of course :)
Reply | Post Message | MESSAGES LIST | START A BOARD

kq4ym 10/30/2017 | 5:27:39 PM
Re: AI will both eliminate and create new jobs Yep, the definition of AI is certainly in flux as time goes by. A radio program this morning talked about Alexis and how the kids are taking to it, talking to it like a real person, making me wonder if that's going to be a game changer in the future as those kids grow up and expect machines to take the place of actual human interactons?
Reply | Post Message | MESSAGES LIST | START A BOARD

kq4ym 10/15/2017 | 11:41:09 AM
Re: AI will both eliminate and create new jobs The numbers predicted seem possibly one of those that one would have to take on faith. While there could be more jobs created with AI over those lost, that so far does not make it a bet I'm willing to take without some more evidence and facts on that prognosis.
Reply | Post Message | MESSAGES LIST | START A BOARD

Susan Fourtané 10/8/2017 | 7:46:09 AM
Re: AI will both eliminate and create new jobs The definition of AI has evolved, indeed, and it covers a much wider spectrum than what it did at the beginning. From self-driving cars to smart-assitants to drones and everything in between, most of us today has engaged with one form or another of AI; having been aware of it, or not.
Reply | Post Message | MESSAGES LIST | START A BOARD

Hmm. Considering that AI's very definition has evolved significantly over time, I wonder how such a prediction could even be measured. What was considered AI 5 years ago, is no longer really "AI" anymore. But I believe it could be argued that AI has *already* become an net job creator, depending on how you define what AI is.
Reply | Post Message | MESSAGES LIST | START A BOARD

Susan Fourtané 10/3/2017 | 5:58:03 PM
Re: AI will both eliminate and create new jobs Exactly. The AI consultants that you mention will grow in number and, lets not forget that in a future shared by robots and humans there will be situations and problematics that dont exist today. The Industrial Revolution eliminated jobs and created new ones, and the world survived.
Reply | Post Message | MESSAGES LIST | START A BOARD

mhhfive 10/3/2017 | 1:29:50 PM
Re: AI will both eliminate and create new jobs If you've ever used Google's search engine for work... then you've taken the first step of augmenting your job with AI. Search algorithms are a type of machine learning, and we're all getting so accustomed to using search tools now that we probably can't even imagine how to do things without the internet and web-based tools.

So has Google search eliminated any jobs? Probably a few, like telephone directory book delivery people? But it has also enabled a host of other jobs that probably were unimaginable before the 1990s. No one knew what a SEO consultant was back then....

I'm sure there will also be AI consultants in the future -- consisting of humans trying to diagnose how to make AI better in very specific ways.
Reply | Post Message | MESSAGES LIST | START A BOARD

Susan Fourtané 10/2/2017 | 10:48:27 PM
AI will both eliminate and create new jobs AI will eliminate and create jobs, and people need to understand that is what has always happened in the history of humanity with other technologies. There are at least five years in which people can upgrade skills, learn new ones, and prepare for the future where they will be interacting with AIs at all times and in all places.
Reply | Post Message | MESSAGES LIST | START A BOARD

mhhfive 10/2/2017 | 3:39:45 PM
Heh. the simple answer is no? According to Betteridge's law of headlines, the answer is nope. But the real answer is of course that some AI will augment humans.. and make things more efficient, as always happens with technology. We don't connect phone calls with human operators anymore...