Chrome Enterprise provides access to enterprise app storefronts to allow IT to control which apps users can install on their Chromebooks and other Chrome OS devices. Chrome Enterprise provides integration with cloud and on-premises management tools, security controls and 24/7 support, at a cost of $50 per device annually, according to a blog post bylined David Karam, Google product manager for the Chrome Enterprise, scheduled to go live on Google's blog Tuesday morning. Enterprise Cloud News obtained an early draft of the blog Monday.

Chrome Enterprise supports Microsoft Active Directory to allow employees to use native credentials to authenticate, while centralizing management of user and device policies for IT admins.

Chrome Enterprise integrates with VMware AirWatch, to provide a centralized approach to managing Chromebooks and other mobile devices.

Chromebooks are Google's bid to get users to go all in on cloud applications. While Chromebooks provide some local data storage, they're designed to run cloud apps. "The more you can store in the cloud, the more power you have in the Chromebook," Phillips says. "You get better security because the devices are updated every six weeks." Because users log in to access applications and data in the cloud, devices can be easily shared among employees. 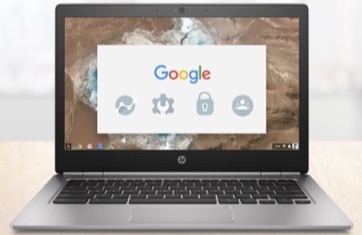 Google's Chrome enterprise push comes as Chromebooks are taking over the US K-12 education market. Chromebooks accounted for 58% of the 12.6 million mobile devices shipped to US primary and secondary schools last year, up from 50% in 2015, according to a report from Futuresource Consulting in March. iPads and Mac laptops fell to 19% from about 25% over the same period, and Microsoft Windows laptops and tablets were relatively stable at about 22%.

Chromebooks overtook MacBook sales for the first time ever in the US in 2015.

Apple is pushing back, partnering with Cisco in an enterprise push, for enhanced security and optimizing Cisco networks to provide a fast lane for Apple devices, to prioritize business over other traffic. Apple is also partnering with SAP on enterprise applications and cloud services to run on iPad and iPhone. (See Apple Hugs Cisco in Big Enterprise Push and SAP Floats Apple Partnership, New Cloud Services.)

VMware's Chrome integration is part of a push by VMware to integrate its software across multiple public clouds. Google and VMware announced a partnership in May to integrate Chrome OS with VMware Workspace ONE, allowing enterprise IT to control deploying applications on Chrome OS devices.

Joe Stanganelli 8/25/2017 | 8:16:03 PM
Re: What hardware will be supported..? @mhh: Respectfully, I think this is a bit like saying, "Microsoft needs to expand its hardware footprint into the printer market so it can compete with HP" (or some such thing).

Google's business plans rely very heavily on the cloud and on possessing other people's data. Giving people more control over their data via Chrome or other Google platforms would be counterproductive to that vision. Google is playing an entirely different game.
Reply | Post Message | MESSAGES LIST | START A BOARD

mhhfive 8/23/2017 | 5:58:52 PM
Re: What hardware will be supported..? Older laptops but also arbitrary new hardware so that enterprises aren't limited by the hardware specs of non-Pixel chromebooks which are generally a bit lackluster.
Reply | Post Message | MESSAGES LIST | START A BOARD

Mitch Wagner 8/23/2017 | 2:35:49 PM
Re: What hardware will be supported..? mhhfive - You're thinking just expanding ChromeOS to older laptops, or something else?
Reply | Post Message | MESSAGES LIST | START A BOARD

[email protected] 8/23/2017 | 2:02:37 PM
Re: What hardware will be supported..? It is definitely a step in the right direction if they hope to gain penetration in the market but organizations are infamous for not changing their hardware providers due to support and repair issues so I don't expect the process to be a fast one for Chromebooks.
Reply | Post Message | MESSAGES LIST | START A BOARD

mhhfive 8/22/2017 | 7:22:57 PM
What hardware will be supported..? I think Google's ChromeOS needs to expand its hardware footprint if it really has ambitions for the enterprise market. There is at least one company already installing a fork of ChromeOS on older laptops for the education market... So I think adopting ChromeOS for a wider footprint of hardware might attract more adoption -- since some companies probably want to leverage their existing hardware.. or don't want to be limited by Chromebook hardware specs in the future if ChromeOS doesn't pan out for them.
Reply | Post Message | MESSAGES LIST | START A BOARD

Joe Stanganelli 8/22/2017 | 6:00:48 PM
VMware/AWS The VMware-AWS partnership was written on the wall the moment Amazon released VMware integration with its AWS Management Portal for vCenter in 2014, IMHO. Regarding competitors like VMware, Amazon has taken the strategy of the Roman Catholic Empire when it came to pagans -- taking what they do and rebranding it as a way to be its own.

Enterprises didn't want to ditch their VMware integrations (even if they weren't locked in the traditional sense, there is always the sunken cost fallacy)...so by making it easier to go with AWS, Amazon gained -- and VMware had to become a partner because its role as a legit competitor had become rather mooted.
Reply | Post Message | MESSAGES LIST | START A BOARD
EDUCATIONAL RESOURCES