CenturyLink Survey: Bloom Not Yet Off MPLS Rose

A new survey of IT professionals, conducted for CenturyLink, shows businesses are still very interested in using MPLS, even as they add software-defined WANs to the mix. In fact, while just over half of those surveyed use MPLS today, the remaining companies polled indicate plans to consider MPLS in the future.

That was not what CenturyLink Inc. (NYSE: CTL) expected when it launched SD-WAN two years ago, admits Eric Barrett, director of network product management, but the survey results do reflect how things have played out since. Most businesses use SD-WAN as a more convenient way to manage their current or future MPLS connections in combination with broadband services needed to cost-effectively provide the bandwidth necessary to access the cloud, he tells Light Reading in an interview.

"Most of them are looking at keeping MPLS, adding broadband and using SD-WAN to manage the combination of both," Barrett says. "I think SD-WAN will affect MPLS, no doubt about it, but right now the effect is on bandwidth upgrades. What is driving SD-WAN is that it is a piece of the puzzle that solves a bigger problem." 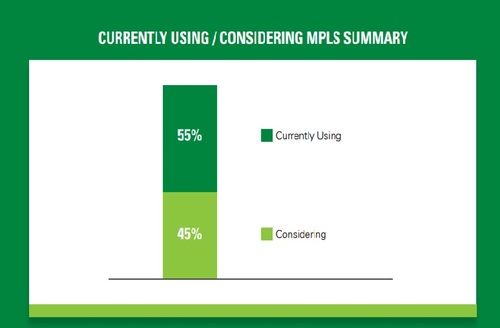 That problem? The impact on the network as businesses move to the cloud and now need more bandwidth -- especially at branch offices and remote sites -- than their existing T-1 based MPLS circuits can handle, he says. Broadband services represent a cheaper way of adding that bandwidth and SD-WAN gives businesses a convenient, less complex means of managing the two together, enabling better network connections to the cloud.

"SD-WAN sits in front of those two -- and actually there is a third option in LTE -- and handles the management of all of that is complicated for businesses to try to do on their own," Barrett comments. "SD-WAN builds a front end that looks like one consolidated network, and that is the dynamic that is driving the growth of SD-WAN; it is really more around the cloud aftermath."

The bonus for businesses is they also now have redundancy, Barrett adds, especially when LTE is added.

The survey was conducted by Spiceworks, a professional network for IT executives, and was intended to reveal the challenges, benefits and drivers of key networking technologies including Ethernet, MPLS and SD-WAN. Find the full report here.

There are some predictable results among the responses. For example, reliability, security and quality of service all outranked price as top concerns for business services. Ethernet remains important for mission-critical services, although timelines for deploying the service are still too long.

CenturyLink expects it's addressing that by pushing forward with more on-demand services, Barrett notes, especially after the addition of Level 3 Communications and its on-demand service platform, developed by tw telecom.

As for when MPLS sales will be impacted by newer services, Barrett compares the transition to the time IP took over ATM and frame relay. Many businesses don't like to change out key services that are "working just fine" and meet business objectives such as compliance, he says. While they may look to other options for bandwidth growth, they are loathe to rip out what's working.

At some point, however, as the intelligence moves to the edge of the network with things like SD-WAN and management of policy/bandwidth control, companies likely will realize they are paying twice -- once for intelligence in the core for MPLS and again for edge-based intelligence. This should impact decision-making, Barrett says.

"And at that point, they'll look for price discounting, and the answer to that will be Ethernet," he says.

The other major finding, which also reflects CenturyLink's experience, is that companies like to buy services in bundles, rather than in composable blocks they can customize. CenturyLink started by offering what was essentially a range of Lego-block type services that companies could customize to their own needs, but found most businesses wanted the service provider to pre-assemble offers, so it now offers a pre-integrated bundle of the most commonly used features, says Barrett.