T-Mobile tweaks TVision for the holidays

T-Mobile has kicked off a holiday promotion for its TVision service that will temporarily combine its entertainment-focused "Vibe" bundle of 30-plus channels with its larger (and more expensive) "Live" packages that mix in an array of news and sports programming. 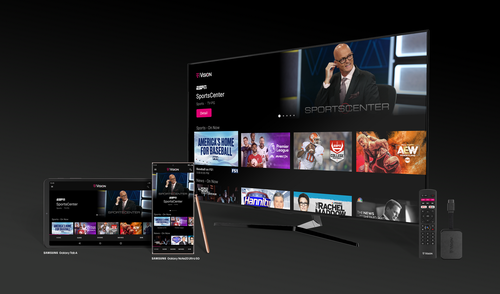 T-Mobile's holiday promo also happens to enter the picture as the company fields complaints from major programmers such as Discovery Communications and NBCUniversal that the way TVision is structured violates the terms of their carriage agreements. Discovery is particularly rankled about how its flagship networks are included in the $10 per month TVision Vibe package but aren't featured in the TVision Live packages.

T-Mobile has held that TVision complies with its programming contracts, though CEO Mike Sievert recently said the company remains "open-minded" about TVision's programming situation and could make alterations, if necessary.

Still, fusing TVision Vibe's lineup with TVision Live, which starts at $40 per month, might help to clear up the programmers' issue. However, it's not clear how long this promotion will last or whether it will morph into a more permanent offering.

T-Mobile's "Holideals" promo merely states that the special TVision offer that combines Vibe with Live packages will be available for a "limited time." A T-Mobile official confirmed that the company is not disclosing the end date for the holiday offer.