The US pay-TV market has been hurting, but not every service provider appears to be feeling the pain.

Aided by a relatively low price and its focus on a skinny lineup of entertainment-focused fare that includes Discovery, HGTV, AMC, DIY Network and A&E, Philo's subscriber base now tops 750,000 amid a 300% rate of growth over the past year.

It marks the first time Philo has revealed a subscriber number since its debut in November 2017.

Philo, a sports-free virtual multichannel video programming distributor (vMVPD), has been able to ratchet up sub growth by keeping its price relatively low (the service starts at $20 per month for a lineup of about 60 channels and a cloud DVR with unlimited storage for up to 30 days) as other OTT-TV service providers  such as YouTube, Hulu and fuboTV  have been raising prices and fattening up their channel lineups. 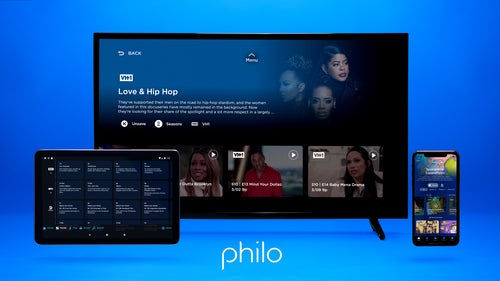 Philo, a low-cost, sports-free streaming TV service launched in late 2017, says its sub base has grown 300% over the past year.

While Philo has no doubt benefited from the temporary pause in televised live sports during the pandemic, the company's subscriber acceleration began before stay-at-home orders started to hit the US, Mike Keyserling, Philo's COO, said.

"We've absolutely seen an acceleration of growth this year," he said, noting that Philo's sub counts began to surge early in 2020 and that Philo has just about doubled subscribers this year alone. "What's really going on is there is a strong desire for live TV services for brands that people love at an affordable price."

Philo attracts subs directly alongside partnerships with platforms such as Roku, Amazon (Fire TV) and Apple. It has also struck up resale deals with traditional broadband and pay-TV service providers that include WideOpenWest and Consolidated Communications.

"I feel we're at the early part of that trend" with ISP partnerships, Keyserling said.

He also believes that Philo serves as a solid complement to a market that is now chock-full of general entertainment, direct-to-consumer, subscription VoD services  a group that includes mainstays such as Netflix, Hulu and Amazon Prime Video alongside newcomers that include HBO Max, NBCU's Peacock and Disney+.

"Philo's price point is a great complement to all of these services ... we have virtually no overlap," Keyserling said.

A mixed virtual MVPD market
Philo's recent subscriber surge is part of a mixed vMVPD market that has been hit by a recent exit (Sony's PlayStation Vue OTT-TV service shut down early this year) and a wave of price increases from YouTube TV, Hulu and fuboTV that has slowed the sector's overall subscriber growth rate. While Hulu's Live TV/SVoD service has tacked on about 1.2 million subs over the past year, Sling TV and fuboTV have both lost subscribers on a sequential quarterly basis.

Philo has begun to spend some dollars on general brand awareness. However, Keyserling said the bulk of Philo's marketing spend continues to center on "performance marketing" in areas such as social media, search, connected TVs and even some direct mail efforts that provide a high degree of predictability in terms of how many subscribers can be generated from a specific amount of spend.

Beyond adding new content (TV One, INSP and getTV) and premium add-ons like Starz and Epix, Philo's also been broadening the capabilities of its underlying technology platform.

One prime example is Philo Connect, a program underway that gives subscribers the ability to control Philo on the TV with a mobile device. Under that program, Philo's Android app is now Chromecast-enabled, letting users cast Philo to a Chromecast device or a TV with Chromecast built in. Philo is working to extend that capability to other platforms, including iOS, web browsers, Amazon Fire TV devices and Roku devices.

While casting Philo to the TV is the initial focus of the company's Connect program, the underlying infrastructure will also open the door to other features and services, such as advanced advertising and the ability to host synced-up viewing parties with other Philo subs on the big screen.

"Co-watching has been a huge movement during [the pandemic], but it hasn't really been solved for the ten-foot experience," Keyserling said.