FuboTV, a "sports-first" OTT-TV service provider, said it will handily beat both subscriber and revenue forecasts for Q4 2020 even as some analysts continue to question whether the business model for so-called virtual multichannel video programming distributes (vMVPDs) can withstand the pressure of rising programming costs and expanding channel lineups. 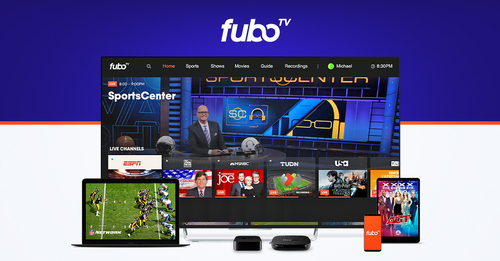 FuboTV will try to further differentiate its streaming service with the addition of online sports wagering.
(Source: FuboTV)

Looking ahead, FuboTV intends to differentiate itself from an increasingly crowded vMVPD market by introducing online sports wagering to the mix. To fuel that effort, FuboTV last month acquired Balto Sports, a fantasy sports tech company that will enable FuboTV to launch a free-to-play offering and later expand into real money wagering in "regulated markets."

"In 2021, we will continue to be laser focused on executing our growth strategies, which include continuing to grow advertising revenues, working to implement sports wagering into our product and further establishing fuboTV as a leader in sports and live streaming," FuboTV CEO and co-founder David Gandler said in a statement.

FuboTV's prelim Q4 results indicate that vMVPDs will turn in another solid quarter. In Q3, that segment of the market, led by strong growth at Hulu and YouTube TV, added a better-than-expected 1.5 million subs, offsetting a loss of about 1.45 million subs among traditional pay-TV service providers.

Despite their recent subscriber gains, vMVPDs continue to be exposed to the same programming rate increases as their more traditional pay-TV rivals, forcing several of them, including FuboTV, Hulu and YouTube TV, to jack up prices in recent months. That scenario is leaving some analysts unconvinced that vMVPDs are in a sustainable business position.

The vMVPD model is "broken," as service providers in that sector continue to succumb to the same issues that have saddled traditional pay-TV providers as they are forced to stuff more channels into their streaming bundles, analysts at LightShed Management proclaimed Monday in a blog post (registration required).

vMVPDs "did not offer much of a fresh start for the multichannel video industry," the analysts explained. "As these services emerged, the hope was to offer consumers better price/value bundles by starting the channel offerings from scratch. For the most part, that hope is gone and vMVPDs are looking more like their predecessors, albeit with better interfaces/features, less RSNs [regional sports networks] and the ability for consumers to cancel (churn) at any time."

Programmers, they added, "have ensured that the 'rules' of the wired MVPD world have not changed in the streaming world."

They said a case in point was this week's announcement that ViacomCBS gained carriage for more than a dozen networks, including BET, Comedy Central and MTV, on Hulu's live TV service, thanks in large part to the power of CBS network/station retransmission leverage.

"The power of bundling broadcast and cable networks is strikingly obvious, as it always has been," they said, holding that whatever differentiation gap that once existed between virtual MVPDs and traditional pay-TV providers has now closed substantially.

The LightShed analysts also aren't buying into the "spin" of vMVPDs that bill themselves as sports-focused. That's "factually untrue," they add, noting that all vMVPDs are missing key sports networks, including RSNs, and holding that the entire OTT-TV market effectively has no leverage to prevent rising programming costs. Philo, an entertainment-focused vMVPD that has steered away from sports programming, might be the lone exception in the group, they said.

Further, the analysts argue that those same vMVPDs are also becoming increasingly exposed to the move by programmers and media giants to shift some of their best fare to new direct-to-consumer streaming services such as Disney+, Discovery+, NBCU's Peacock, Paramount+ and HBO Max.

"The end result is that vMVPDs and their subscribers are being forced to carry/pay for more and more channels in a bundle that is being used less and less by consumers every day as viewership shifts to streaming," they wrote. "Beyond sports and news, it is no longer debatable where the 'most compelling' content can be found."