Adding a degree of continuity to the cable access product market as it takes over Cisco's cable amplifier business, ATX Networks has pinned down a distribution deal for next-gen outside plant products with Colorado-based Digicomm International.

The agreement, which expands on an earlier, smaller one between ATX and Digicomm, covers ATX's GigaXtend GMC amplifiers, including new 1.2GHz amplifiers and line extenders that are compatible with Cisco's GainMaker product line, as well as ATX's new family of GigaXtend XS family of 2GHz taps and passives. 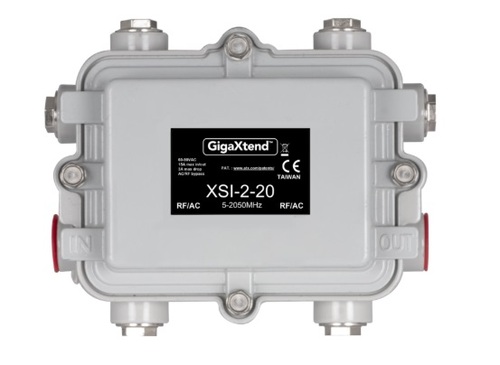 The deal with Digicomm covers ATX's coming line of GainMaker-compatible products and its own new line of cable access products, the 2GHz GigaXtend Hardline Passives, pictured.

The deal comes at an important time for ATX, which has the green light to build amplifiers that are compatible with Cisco's widely deployed GainMaker technology as Cisco prepares to halt the sale of GainMaker products starting this fall. (Cisco said October 15, 2020, is the final day it will take orders for GainMaker amps, though buyers can extend or renew service contracts on those Cisco products through January 13, 2025.) ATX expects to start shipping product in September as the end-of-life/sale date for Cisco's GainMaker products approaches.

Given Digicomm's history with Cisco, the new deal with ATX should be a relatively easy fit. Digicomm is a long-time authorized Cisco partner that's been stocking GainMaker products for more than a decade and providing vendor-managed inventory services for Tier 1 MSOs such as Comcast and Charter Communications.

Digicomm is in the best position to manage the legacy inventory along with the new products, Charlie Vogt, ATX's former CEO, said in a recent interview, noting that Digicomm has signed on to handle a "significant" amount of ATX inventory. Digicomm will be in position to fulfill orders within days of receiving them from the cable operators, he said.

Rob Donziger, president and CEO of Digicomm, expects that situation with cable operator partners to continue as the new, expanded deal with ATX takes effect, the companies collaborate on product approvals, and Digicomm looks to fulfill orders based on inventory that is on hand.

"Our mutual customers are going to be able to continue with that same level of service," Donziger said. "An advantage that Cisco's traditionally had over some of the competitors is short lead time, when we've taken a large stocking position. I think that's going to be a huge competitive advantage for Digicomm and ATX. We'll be able to ship these amplifiers immediately from stock with no lead times. That's certainly the goal of this partnership."

"We look at Digicomm as an extension to ATX, including the fulfillment part," Vogt said. "This ultimately gives our team an opportunity to really focus on what's next."

The road to 1.8GHz... and beyond
What's next for ATX includes participation in ongoing 1.2GHz cable network upgrades, coming 1.8GHz upgrades and ongoing development of products that support future 3GHz cable network capacity upgrades. ATX, which is eyeing the emerging market for DOCSIS 4.0, is also heavily involved in the Generic Access Platform (GAP), an industry initiative focused on standardized fiber nodes that can accommodate snap-in service modules.

Those spectrum upgrades are also entering play as cable operators like Comcast continue to prepare for Full Duplex DOCSIS (which puts upstream and downstream traffic on the same block of spectrum) while others MSOs consider implementing a "mid-split" or "high-split" that would increase the amount of spectrum that's dedicated to cable's upstream.

"Every MSO in North America is implementing one or the other  a mid-split or a high-split  and even a number of operators in Latin America," Jay Lee, ATX's chief technology and strategy officer, said.

The ATX-Digicomm deal also goes down as one of the final major acts by Vogt as ATX's CEO. Vogt, it was announced Monday, has been named president and CEO and as a director of Dasan Zhone Solutions Inc. However, Vogt will remain a member of the ATX board. Light Reading will have more detail on this development later today.