Twenty TVs with built-in capabilities for ATSC 3.0, the next-gen broadcasting signaling standard, rolled out in 2020 and several more models will debut this year. 2021 will also be the year that will usher in the first wave of ATSC 3.0-capable receivers, devices that should expand consumer adoption of the new standard as US broadcasters light up more markets throughout the year.

The emergence of these receivers was an area of focus today during a press event focused on ATSC 3.0, a standard that carries the "NextGenTV" consumer brand, ahead of next week's virtual CES confab.

Shipments of the ZapperBox M1 are expected to begin in Q2 2021.

Among the first in that lot is the ZapperBox M1, a product outfitted with BitRouter's ATSC 3.0 software stack. BitRouter is also offering the ZapperBox M1 under a white-label model that can be rebranded by original equipment manufacturing (OEM) partners.

Per the ZapperBox website, consumers can reserve the product ahead of shipments set to start in Q2 2021 – they can plunk down a deposit of $99 toward the full price of $249. Though ATSC 3.0 is being billed as a broadcast data pipe, the ZapperBox M1 FAQ points that that consumers will need to connect the device to a traditional broadband connection to allow for software updates.

Though the pandemic slowed the rate of deployment by US broadcasters, today there are 21 ATSC 3.0 markets on-air covering about 20% of US households. There are plans underway to expand that to more than 50% of homes this summer and to more than 70% by the end of 2021, according to Anne Schelle, managing director of Pearl TV, a consortium of broadcasters that span about 750 stations.

ATSC 3.0 backers have launched a consumer site that promotes NextGenTV and its capabilities and provides a way for people to keep tabs on market deployments. 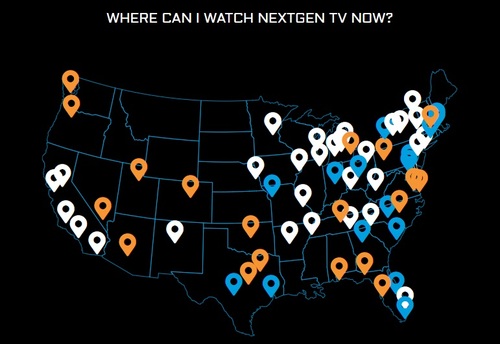 A new web site, at www.watchnextgentv.com, provides consumers with basic details about the new broadcast signaling standard, the services it will enable, as well as the markets that are lit up today and will be added to the list in the summer and fall of 2021.

Gopal Miglani, BitRouter's president, said the ZapperBox M1 is the first product to license the company's ATSC 3.0 software stack. He expects a slow ramp up in 2021 and aims to juice sales through resellers and OEMs that don't want to build new box models on their own.

ATSC 3.0 will also support mobile devices and is poised to play a role in connected cars.

Last year, One Media 3.0, a subsidiary of Sinclair Broadcasting, received its first handful of Android smartphones with embedded ATSC 3.0 antennas made by Borqs, an India-based original equipment manufacturer.

Kerry Oslund, VP of strategy and business development for The E.W. Scripps Company, noted that an "auto test track" in Detroit is underway to help the auto industry work on proof of concepts for the use of ATSC 3.0-powered datacasting.

Noting that cars are becoming "rolling computers," he said 10% of the ATSC 3.0 capacity in the market has been carved out for the automotive projects. Early tests have focused on sending files  the first sent was a PDF of the first patent for an automobile, he said.

Broadcasters and app developers say they are encouraged by the fact that ATSC 3.0's framework enables them to modify and extend their existing mobile and web-based apps for the new standard.

Bryan Dunbar, VP and CTO for The E.W. Scripps Company, noted that only a small portion of the broadcaster's content makes it to the on-air product, with most of it going to various digital channels. ATSC 3.0 will put the broadcaster in position to bring that digital environment and content, such as daily forecast videos, to the TV using the same workflow, the said.

IBM, which acquired The Weather Company in 2016, is also getting into the act.

IBM, a developer for Pearl TV's ATSC 3.0 model market project in Phoenix, has been working on ways to modify its mobile and web content and widgets for ATSC 3.0, including ways to support personalized forecasts and maps. That represents phase I of IBM's work around the new standard, according to Joe Fiveash, VP of strategy and media solutions at the Watson Advertising and Weather Group of IBM.

While delivery of over-the-air signals will be central to ATSC 3.0, work is also underway on how to pass those signals along to cable customers.

Late last year, Comcast, which owns major US broadcaster NBCUniversal, announced it was working with broadcasters in Portland, Oregon, to test the delivery ATSC 3.0 signals via its hybrid fiber/coax (HFC) network, starting with the passing through of video in 4K and HDR.