Comcast brings Hulu to Flex, with X1 on deck

Expanding the amount of premium streaming fare offered via its video platforms, Comcast announced it has made Hulu's subscription VoD service available on Xfinity Flex, with plans to do the same on its X1 platform "soon."

Comcast's platform/device integration currently is limited to Hulu's SVoD service (including both the ad-supported and ad-free versions of that offering), and does not presently include Hulu's live TV service. However, Comcast's integration of Hulu does extend to the cable operator's voice navigation platform for both X1 and Flex. 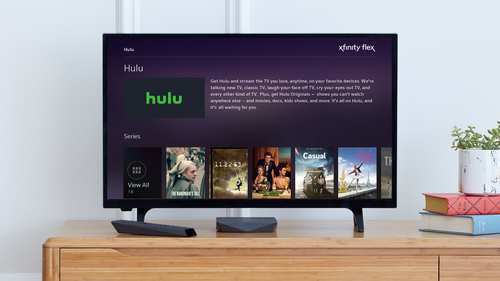 Offered as a free add-on to Comcast's broadband-only customers, Flex runs on a 4K-capable IP client called the Xi6 and works in tandem with a broadband gateway from Comcast or operator-approved retail models.

Hulu's launch on Flex comes weeks after Comcast CEO Brian Roberts hinted at a Morgan Stanley conference earlier this month that the cable operator was nearing the completion of its Hulu integration.

Why this matters
The move broadens Comcast's integration of popular free and subscription-based OTT-delivered video and music services, building on earlier tie-ins with services such as Netflix, YouTube, Tubi, Xumo, Amazon Prime Video and Pandora, among others. Comcast is also working on a similar integration of CBS All Access.

Comcast's embrace of OTT is also expanding as the company's core business centers on broadband connectivity and as the cable op expects its traditional pay-TV base to decline further in 2020.

The Comcast-Hulu deal might also clear the path for a similar arrangement for Cox Communications. Cox's Contour pay-TV offering and Flex-like Contour Stream Player offering are both based on a syndication deal with Comcast. Charter Communications has also held talks with Comcast about developing a Flex-like product.

For Hulu, the integration will provide the Disney-owned service with additional exposure to both Comcast's broadband-only customers and its full pay-TV base. Hulu ended Disney's fiscal first quarter of 2020 with 27.2 million subscribers, up 29% year-over-year, along with 3.2 million customers on its live TV service.