That basically describes a new bundle from Evoca that ties together its own pay-TV service with pay-TV packages from Sling TV, the Dish Network-owned virtual multichannel video programming distributor (vMVPD).

Evoca uses a mix of broadband and IP-based ATSC 3.0 signals to deliver its $25 package of local broadcast TV channels and regional sports networks, while Sling TV is an Internet-delivered service that markets packages of national networks, including ESPN, FS1, AMC and A&E, and some niche channels. 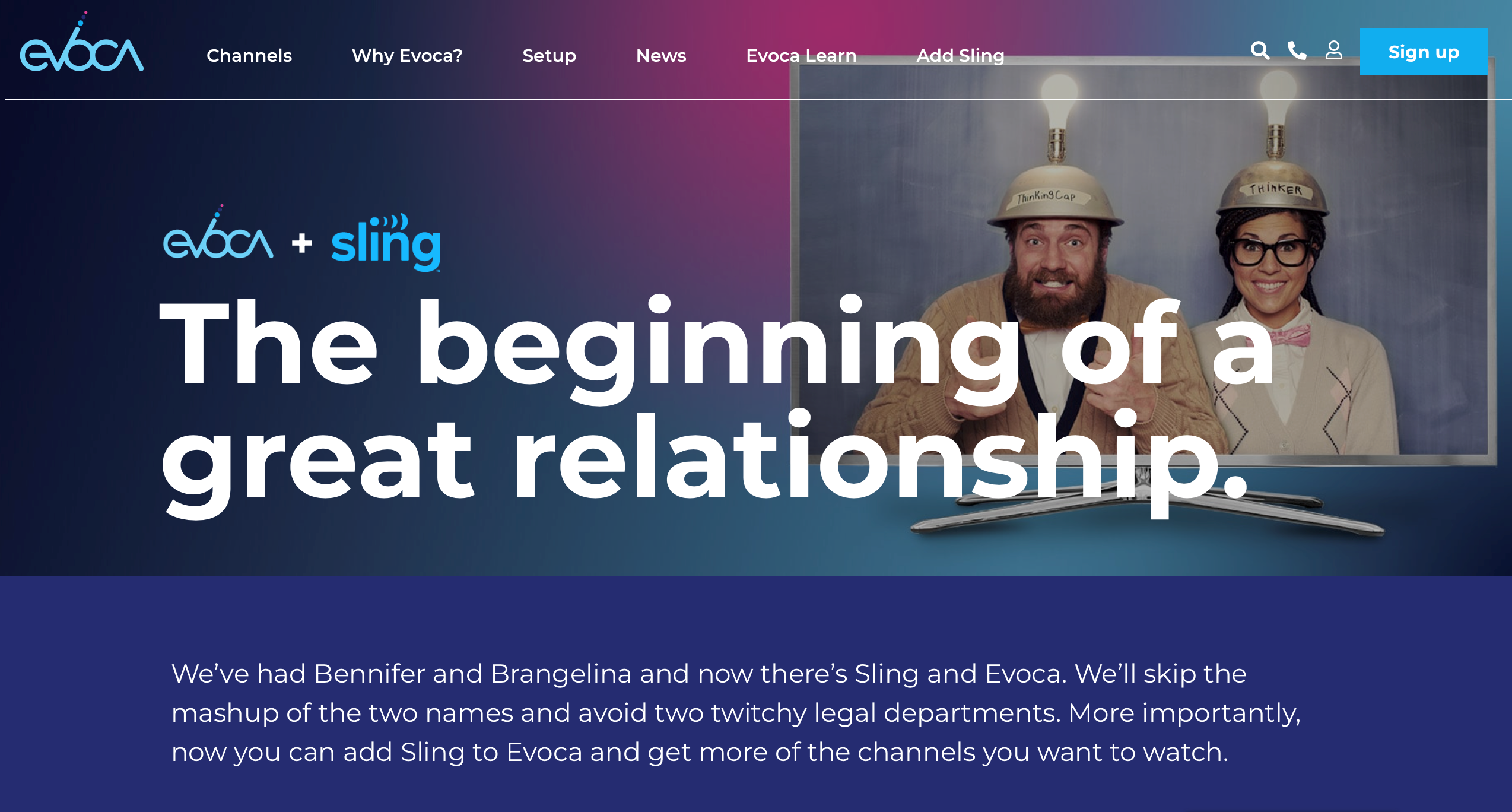 Evoca is now marketing a bundle that ties together its own $25 per month pay-TV service with Sling TV's primary Blue and Orange pay-TV tiers.
(Source: Evoca. Used with permission.)

Evoca will continue to offer its standalone service, but will also be able to integrate Sling TV into its own on-screen guide through a couple of device options  a Linux-based receiver called the "Scout," as well as the "Pilot," a recently launched box made by CommScope and powered by Android TV.

Evoca is taking the lead on the new video bundle, enabling customers in a handful of US markets to tack on Sling TV's set of packages for a small discount, and combining the offering in one unified guide/user interface and on one bill.

With the Sling TV bundle included, here's how Evoca's packages now stack up.

Customers who take the bundled option are in line for a $5 monthly discount on the attached Sling Orange, Blue or Orange+Blue package.

Evoca and Sling TV aren't disclosing the financial terms of the agreement, so it's not clear if it's under a revenue-sharing arrangement or if Evoca is receiving some kind of bounty for any Sling TV customers that come through its door.

But Evoca President and CEO Todd Achilles confirmed that his platform is handling the sign-up process and the broader overall billing relationship of the Evoca-Sling TV bundle.

Achilles said Evoca and Sling TV have been working on the deal for more than a year.

"We're the only service that's cracked the code on how to do locals with regional sports without a $90 per month bundle," he boasted.

From Evoca's end, the Sling TV deal enables the company to offer a lineup of major, national networks without having to cut its own, separate carriage deals.

Sling TV, meanwhile, gets some exposure to consumers who have cut out traditional pay-TV and are looking for a lower-cost package that features live locals, regional sports networks and mix of national channels.

"The Sling TV partnership is core to what we're going to do going forward," Achilles said. "But we'll continue to keep our focus on local content and regional sports."

Evoca is also expanding its reach with a launch in Portland, Oregon.

Evoca is an early adopter of ATSC 3.0, a new IP-based broadcast TV signal that is being branded as "NextGenTV." In addition to delivering regular local TV broadcasts, ATSC 3.0 also supports the 4K and HDR video formats, immersive audio and interactive applications.